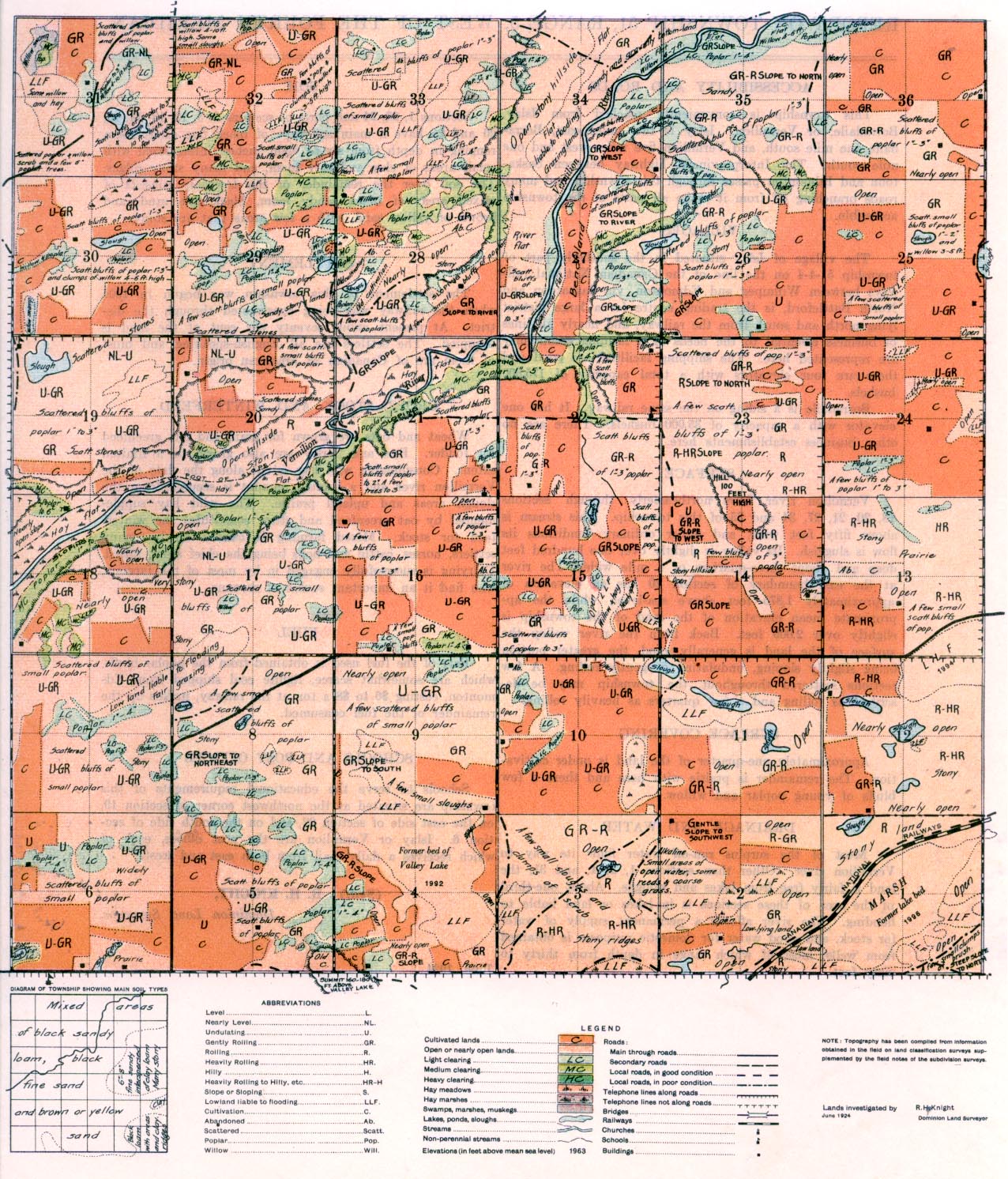 REPORT ON TOWNSHIP 51, RANGE 5, WEST OF THE FOURTH MERIDIAN'

ACCESSABILITY AND ROADS
This township is conveniently reached from Islay, Borradaile, or Vermilion. Islay is two miles east, Borradaile one mile south, and Vermilion five miles west and one mile south. The Interprovincial highway between Saskatoon and Edmonton passes through this township and many roads branching off from it make all parts of the township aceessible.

VILLAGES
The village of May situated in the southerly part of township 51-4-4 on the line of the Canadian National railways between Winnipeg and Edmonton, via Saskatoon and North Battleford, is the trading centre for a large district lying north and south from the railway, and nearly all, lines of business essential to the needs of a farming community are represented here. The shipping facilities are good and there are four elevators with a total capacity of 175,000 bushels.
Borradaile is a siding an the same railway. It has one elevator with a capacity of 35,000 bushels. There are no other business establishment here.

SURFACE
Vermilion river flows northeasterly through sections 18, 20, 21, 27, 34 and 35 of this township. This stream is about fifty feet wide, and under ordinary conditions its flow is sluggish. Its valley is slightly over one hundred feet deep and about three-quarters of a mile wide. The river at the east boundary of section 20 has an elevation of approximately 1,875 feet above sea-level, while the approximate mean elevation of the land of the township is slightly
over 2,000 feet. Back from the river valley the surface of the land is generally good, the greater portion being slightly sloping, undulating or gently rolling. A few sections scattered throughout the township may be described as rolling and a few quarters as heavily rolling.

SURFACE COVERING
Approximately one-quarter of the land is under cultivation. The remainder is prairie with here and there a few bluffs of young poplar and willow.

DRAINAGE AND WATER
Most of the surplus run-off water finds its way to Vermilion -river. Other than sections 1, 2, 4, and 31, the land is fairly free from lakes and sloughs. About one-third of the area of these sections is in lakes or land liable to flooding. The river affords a permanent supply of water for stock, and good water for domestic purposes is obtained from wells, most of which range in depth from thirty to sixty feet.

SOIL
Sections 1, 23, 24 and parts of sections 2, 5, 12, 13, 14, 15, 26 and 25 have a main soil type of black fine sandy loam ranging in depth from six to eight inches, interspersed with small areas of clay and clay loam, and many stony ridges. The soil over the remainder of the township consists of mixed areas of black sandy loam, black fine sand, and brown or yellow sand, with a few areas that are stony.

SETTLEMENT
The settlement of this township was begun in 1904 when the railway was being constructed through the district. At present about seventy per cent of the land is occupied. The settlers axe all English-speaking and most of them are of Canadian or American origin.
June, 1924.

CROPS, STOCK AND WINTERFEED
Wheat and oats are grown for grain and oat greenfeed for fodder. Rye and barley are also grown to a limited extent. Considerable wild hay is cut along the flats of the Vermilion river and a limited amount is secured from the slough areas and up-land prairie. The wild hay supplemented by oat greenfeed and straw constitutes the winter- feed for stock. Mixed farming is carried on by many settlers, horses, cattle and hogs being the chief stock raised. Dairying is successfully engaged in by most of the farmers, who find) it an important source of revenue.

FUEL
Part of the fuel used is obtained from the poplar bluffs, which are somewhat scarce, lignite coal shipped from Edmonton, costing $6 to $8 a ton at the railway, makes up the remainder of the fuel consumed.

SCHOOLS AND POST OFFICES
Schools to serve the educational requirements of this township are situated at the northwest comer of section 19, on the east side of section 22, and on the south side of section 6. Islay or Vermilion are the post offices, each of which receives a daily mail from both east and west.