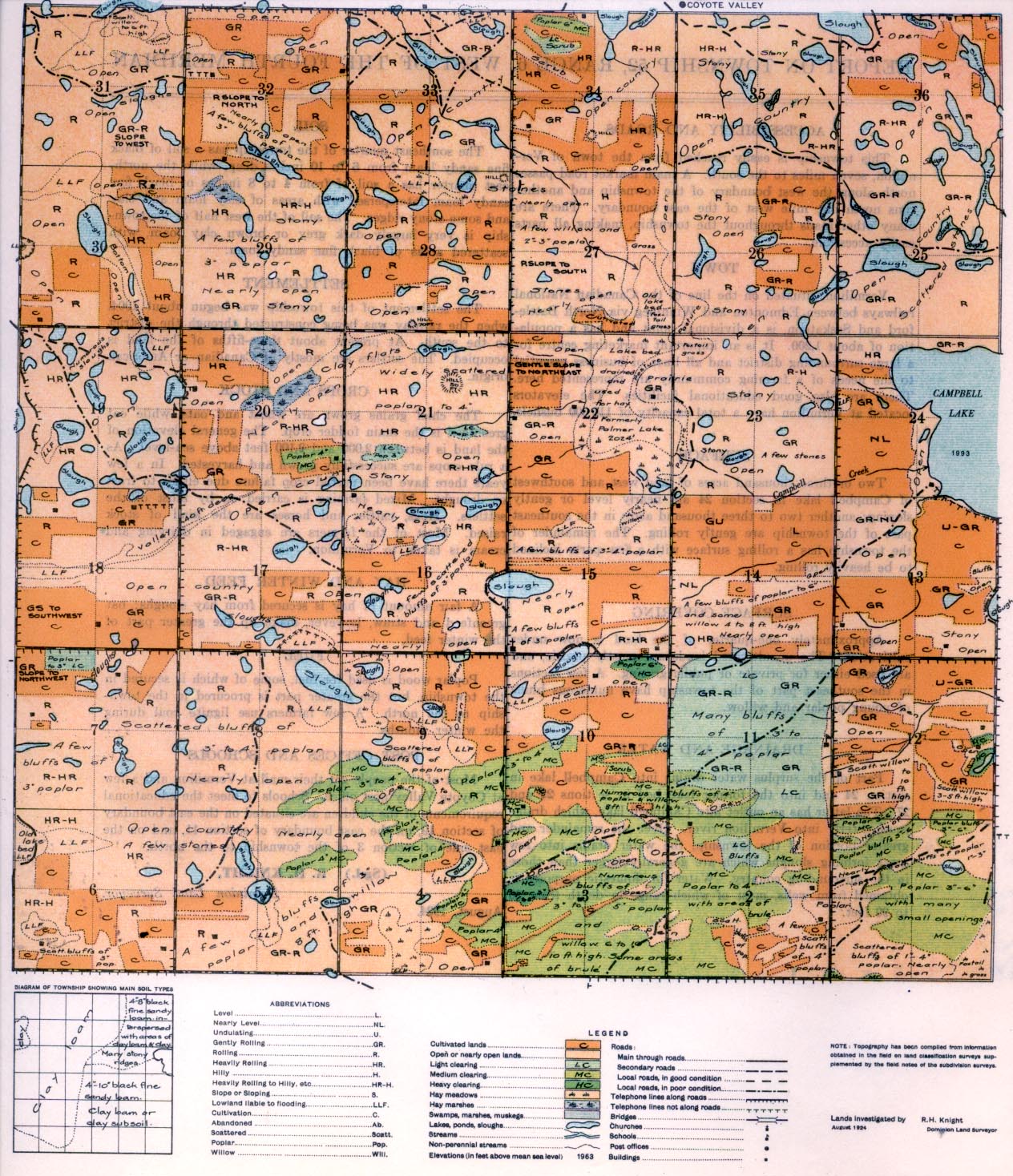 REPORT ON TOWNSHIP 52, RANGE 6, WEST OF THE FOURTH MERIDIAN

ACCESSIBILITY AND ROADS
This township is easily reached from the town of Vermilion, seven miles to the south. A main market road passes north along the west boundary of the township and another runs north one mile west of the east boundary. There are many other roads throughout the township, making all parts easily accessible.

SURFACE COVERING
Approximately one-quarter of the land is now under cultivation. The uncultivated lands are mostly prairie, and are used either for
private or public grazing. A few sections in the southeast part of the township have numerous bluffs of young poplar and willow.

DRAINAGE AND WATER
Part of the surplus water drains into Campbell lake in section 24 and into the former lake bed in sections 22 and 27. The latter has an outlet into Campbell lake, which drains southeasterly into Vermilion river. Over the remainder and greater portion of the township, the water drains into low areas forming sloughs which are generally larger than those in the surrounding country. Water for domestic purposes is obtained from wells, most of which range in depth from 30 to 90 feet.

CROPS AND STOCK
The chief grains grown are wheat and oats, while oat greenfeed is the main fodder crop. The general elevation of the land is between 2,000 and 2,100 feet above sea-level. As a rule crops are successfully grown and harvested. In a few years there have been partial crop failure either to frost or drought. Mixed farming is carried on by most of the settlers. Hogs, cattle, and horses are the kind of stock raised. Most of the farmers are engaged in dairying and cream is taken to Vermilion.

SETTLEMENT
The settlement of this township was begun about 1904, when the railway was being constructed through the district to the south.
At present about three-fifths of the land is occupied. The settlers are mostly of Canadian or American origin.

HAY AND WINTER FEED
A fair amount of hay is secured from hay sloughs; oat greenfeed and straw, however, make up the greater part of the winter feed.

FUEL
Poplar wood is used for fuel, some of which is secured in the township, but the greater part is procured in the town- ship to the north. A few farmers use lignite coal during the winter months.