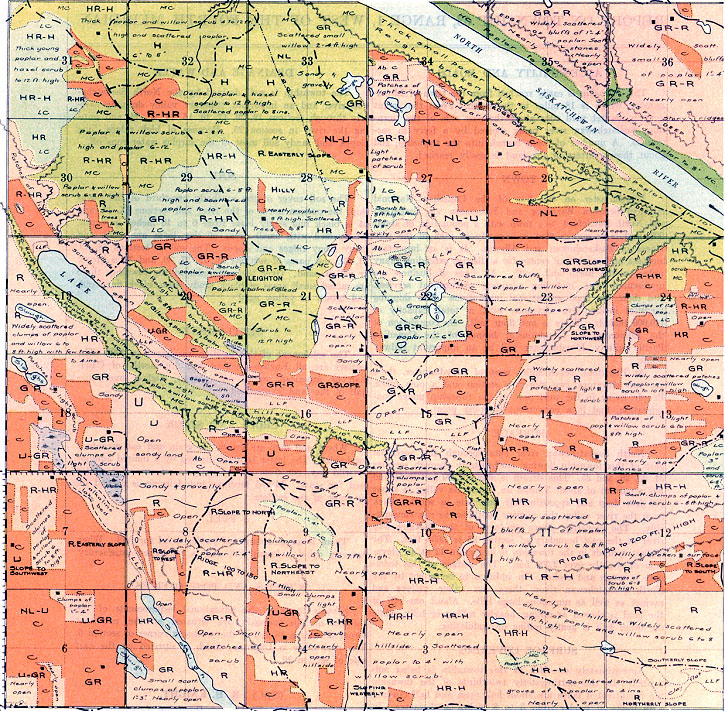 REPORT ON TOWNSHIP 53, RANGE 1, WEST OF THE FOURTH MERIDIAN

ACCESSIBILITY AND ROADS
This township is easily reached from the town of Lloydminster, which is 18 miles to the south. From that point a main market road runs along the east side of the township, Saskatchewan river being crossed by a ferry in section 25. A number of roads branch into the township, and about three-quarters of the land is easily reached.

TOWN
Lloydminster on the line of the Canadian National railways between Winnipeg and Edmonton via Saskatoon and North Battleford, is a town with a population 9f about 900, and is unique in that it is partly in each of the provinces of Saskatchewan and Alberta. It is an important business and marketing centre for a district extending many miles to the north and south. All lines of business are represented here, including adequate professional services, and there are good educational institutions. The shipping facilities include five elevators with a total capacity of 140,000 bushels.. There is one flour mill. On completion of the Edmonton to Lloydminster branch of the Canadian Pacific railway, Lloydminster will be an important railway point.
At Blackfoot, seven miles west of Lloydminster, there are two elevators, two stores, a station and a post office. People living in the west part of the township under consideration, find it a convenient shipping point.

SURFACE
North Saskatchewan river cuts through the northeast part of this township flowing southeasterly through sections 34, 35, 26, and 25. This stream is about 1,200 feet wide and has a current of about 3 miles an hour. Its valley is about 200 feet deep and approximately one mile in width. Back from the river valley the country continues to rise considerably. The elevation above sea-level of the Saskatchewan river at the east boundary of section 25 is 1,635 feet. The highest summit in the township is in section 12 at an elevation of slightly over 2,200 feet. The surface of this town- ship is rough and broken. In addition to being cut by the North Saskatchewan river, there are other valleys and ravines as well as numerous large hills. About one-half of the land is classed as rolling, heavily rolling or hilly, while the other half is gently rolling or undulating.

DRAINAGE AND WATER
The township is well drained by the North Saskatchewan river and an important tributary valley draining easterly through sections 19, 20, 17, 16, 15, 14, 23, 24, and joining the river in section 25. Because of high ridges, long slopes, and sandy soil most of the surplus water runs off.
The soil cover of the southerly one-third of the township, the portion north of the river and sections 13, 14, and 24 is black fine sandy loam from 6 to 10 inches in depth, interspersed with small areas of clay loam and clay, and many stony ridges and slopes. The soil in sections 28, 29, 31, 32, and parts of sections 21, 22, 27, 30, and 33 is brown or yellow sand. Over the remainder of the township there are -mixed small areas of black sandy loam, black fine sand, and brown or yellow sand.

SETTLEMENT
The settlement of this locality was begun in 1906. The .settlers are all English-speaking and are mostly of Canadian or American origin. At present, slightly over one-half of the land is occupied.

CROPS AND STOCK
Wheat and oats are grown for grain and Gat greenfeed for fodder. The latter is supplemented by a limited amount of wild hay, cut from upland prairie, and straw for winter feed for stock. Mixed farming and dairying is carried on by most of the settlers.

FUEL
There is -an abundance of poplar wood for fuel. When properly dried it burns well and is considered satisfactory.

SCHOOLS AND POST OFFICES
Schools to serve the educational requirements of the children of this township are situated at the northeast corner of section 16 and at the southwest comer of section 6. The post office is Leighton, which is situated on the east side of section 20.