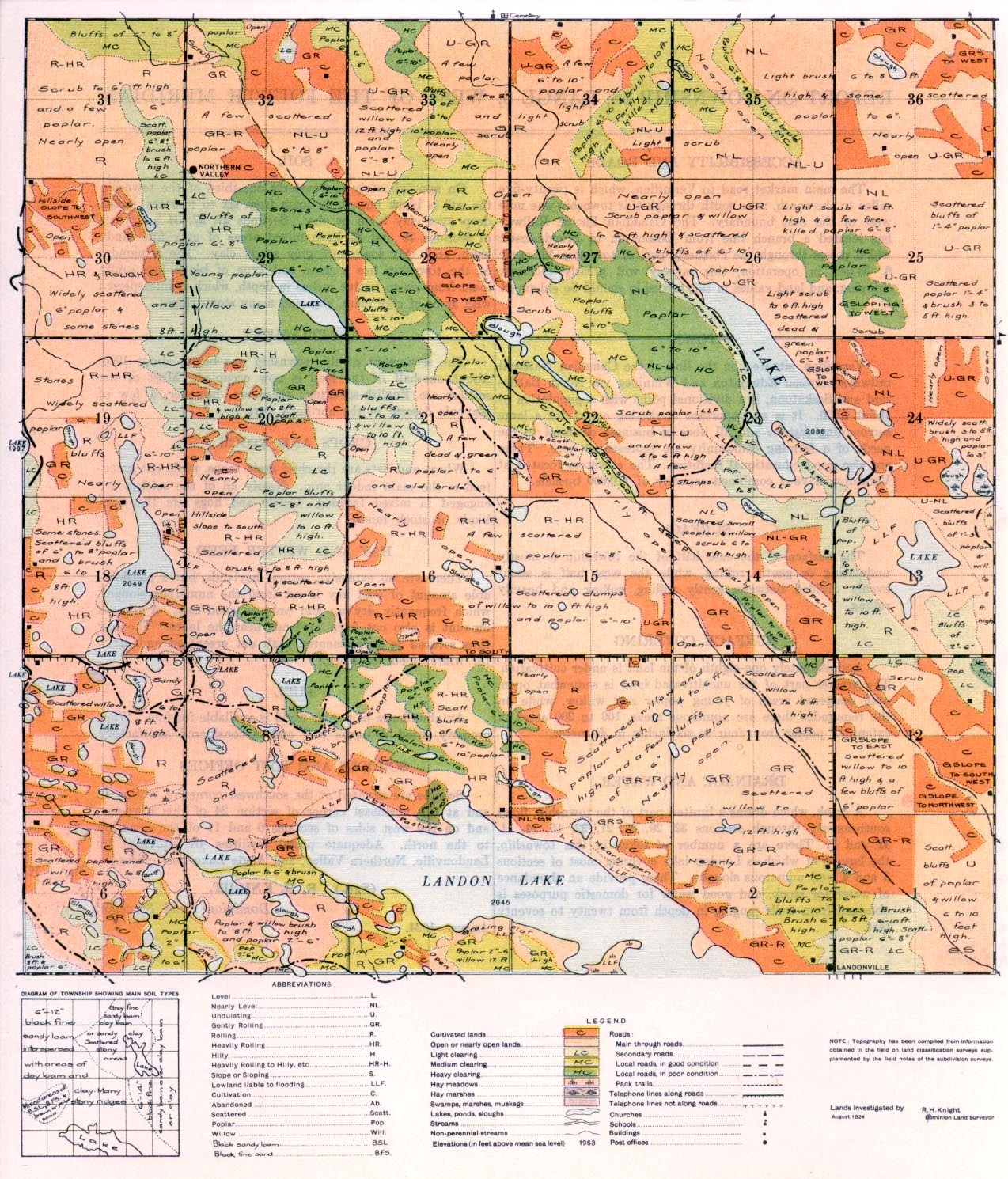 REPORT ON TOWNSHIP 55, RANGE 6, WEST OF THE FOURTH MERIDIAN

ACCESSIBILITY AND ROADS
The main market road to Vermilion, which is twenty-five miles to the south, runs south through this township one mile west of the east boundary, The Canadian Pacific Railway has located a branch line from Edmonton to Lloydminster which passes through the northerly part of township 53, range 6. When in operation, this railway will greatly facilitate shipping, and land values in this township should be enhanced.

TOWN
Vermilion, situated on the line of the Canadian National railways between Edmonton and Winnipeg via North Battleford and, Saskatoon, is a divisional point with a population of about 1200. It is an important marketing centre for a large surrounding district and all lines of business essential to the needs of a farming community are represented here. There are also good educational facilities. The elevators located at Vermilion have a combined capacity of 110,000 bushels.

SURFACE
The surface of the east half of the township is mostly undulating or gently rolling, while the west half is about evenly divided between gently rolling, rolling and heavily rolling.

SURFACE COVERING
Approximately one-eighth of the land is under cultivation. ,The greater part of the uncultivated land is somewhat open, with scattered areas of young poplar and willow, while on the remainder there are numerous areas, 100 to 200 acres in extent, of poplar from four to six inches in diameter.

DRAINAGE AND WATER
A creek, which drains a limited part of the township, flows southeasterly through sections 32, 29, 28, 21, 22, 15, 14, 11, 12 and 1. There are a number of lakes in this township, the largest of which is Landon Lake covering most of sections 3 and 4, and numerous sloughs. These provide an abundance of water for stock, and good water for domestic purposes is obtained from wells ranging in depth from twenty to seventy feet. I

SETTLEMENT
The settlement of this township was begun about 1906. About one-half of the land is now occupied. Most of the settlers are English-speaking; there are, however, a few of Slavonic descent in the northerly part.

CROPS AND STOCK
Wheat and oats. are the chief grain crops, while oat green- feed is the main fodder crop. Nearly all of the settlers are engaged in mixed farming. Cattle and hogs are the chief kinds of stock raised.

HAY AND WINTER FEED
There are no extensive natural haylands, but a considerable amount of wild hay is cut from the numerous sloughs, which frequently dry up and produce good hay. A limited amount is also cut from lowlands near the lakes. The hay thus secured is supplemented with oat greenfeed and straw for winter feed for stock.

FUEL
An abundance of poplar wood is available for fuel. When properly dried it bums well and is considered satisfactory.

SCHOOLS AND POST OFFICES
Schools are situated at the southwest comer of section 16 and at the northeast comer of section 24 of this township, and on the west sides of sections 6 and 11 of the township to the north. Adequate postal facilities are provided by Landonville, Northern Valley, and Angle Lake post offices.