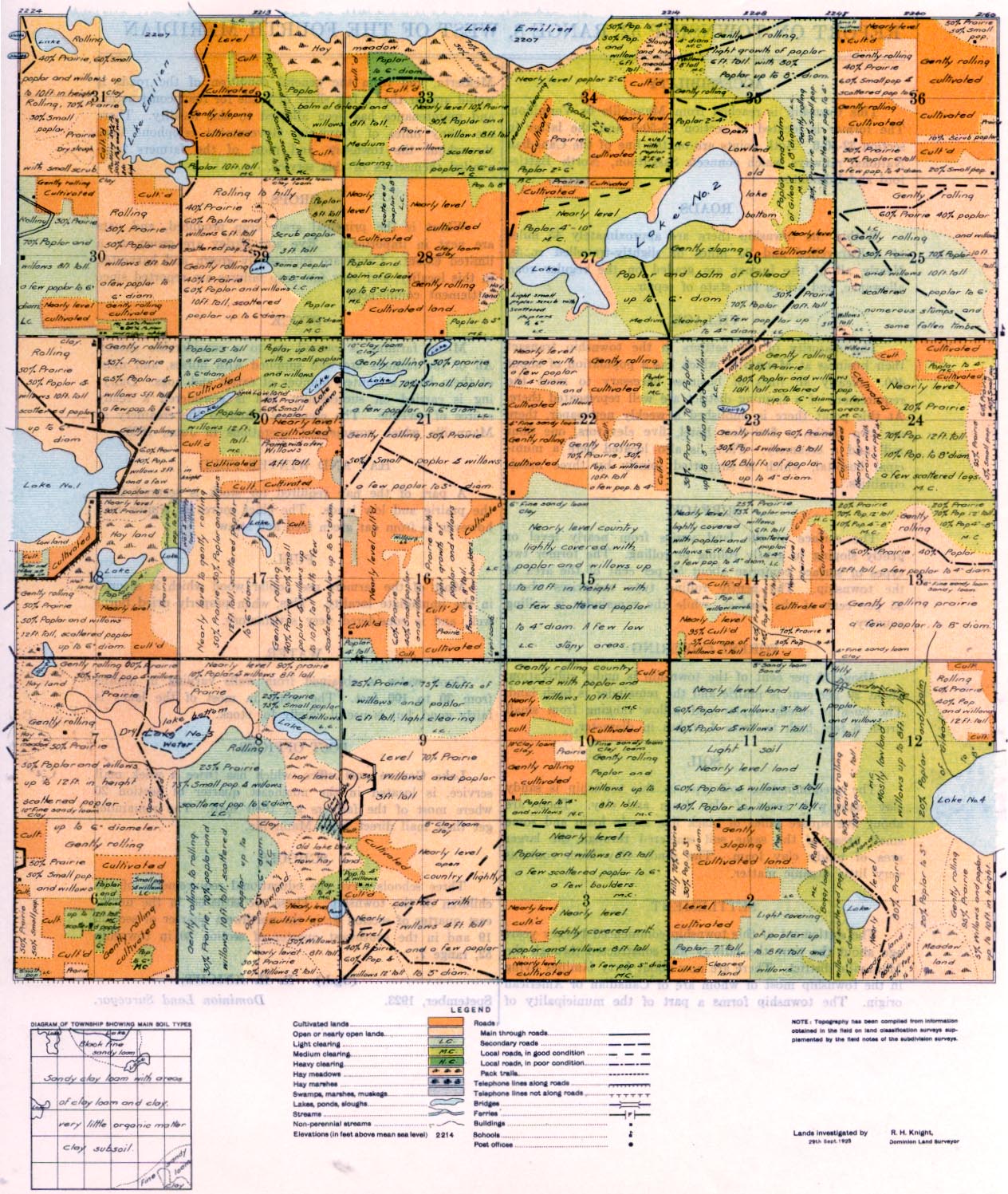 REPORT ON TOWNSHIP 52, RANGE 8, WEST OF THE FOURTH MERIDIAN

ACCESSIBILITY
This township is reached from Mannville or Vermilion. The former is located in section 25-50-9 and the latter in section 32-50-6. Both points are on the line of the Canadian National railways which connects Saskatoon, North Battleford and Edmonton.

ROADS
Within the townsbip there are approximately 45 miles of well-travelled and 25 miles of lightly-travelled roads. Nearly all of the former are graded on the regular road allowance, and are in fair state of repair.

VILLAGE
The majority of the settlers in the township transact their business at Mannville, which has a population of about 400. Nearly all lines of business necessary to meet the requirement of a farming district are well represented there. At this point there is published a weekly newspaper, there are two banks, a first-class hotel, five elevators,one flour mill and, a creamery. There is also located here a municipal hospital, which is supported jointly by three municipalities.

FOREST COVERING
About 15 per cent of the township is under cultivation, about 20 per cent is prairie and the remainder is bush land the bush is chiefly poplar and willow ranging from small brush 6 feet high to trees 4 inches in diameter.
The predominating soil type in this township is sandy lay loam with areas of clay loam and clay. There are about five square miles of black fine sandy loam and some small areas of the same soil scattered through the larger area of sandy clay loam. The sandy clay loam contains very little organic matter.

SETTLEMENT I
The settlement of this towwbip commenced twenty years go about the time the railway was constructed through the Mannville district. There are now about forty families living in the township must of whom are of Canadian or American origin. The township forms a part of the municipality of Melberta, and, from the general condition of the roads it would appear that a fair share of funds for road construction and maintenance has been allotted to this locality. There are many miles of Provincial Government telephone lines throughout the township, and most of the farmers have
availed themselves of this service.

CROPS
Wheat is the principal grain crop produced, and oats are next in importance. Rye and barley are grown to a limited extent. Crops are successfully grown and harvested in this locality, and very few crop failures are reported since settlement commenced. .

STOCK
Mixed farming is carried on to a considerable extent. All of the farmers are well supplied with horses, and most of them have a limited number of cattle and hogs. Dairying is carried on successfully, and is considered a ready source of revenue. The cream is taken to the creamery at Mannville which commenced operations in

June, 1923.
HAY AND WINTER FEED
A part of the hay required for stock is secured from the prairie and low lands. The chief source of winter feed however, is from oat green feed and straw.
FUEL
Most of the farmers use poplar wood which is secured in the immediate locality. This, when properly dried burns well and is considered very satisfactory.
WATER
Good water is obtained from wells varying in depths from 30 to 100 feet. The water in most of the lakes is fairly good, but is useful chiefly for stock.
POST OFFICES
Lake Geneva post office, which has twice a week mail service, is located in the northeast quarter of section 20 where most of the farmers get their mail. The remainder get their mail direct from Mannville.
SCHOOLS
Three schools serve the educational requirements of the children of the township. These are situated in the north-east quarter of section 4; in the northwest quarter of section 19 and in the southwest quarter of section 30 in township 52, range 7.
September, 1923.
(Sgd.) R. H. KNIGHT, Dominion Land Surveyor.