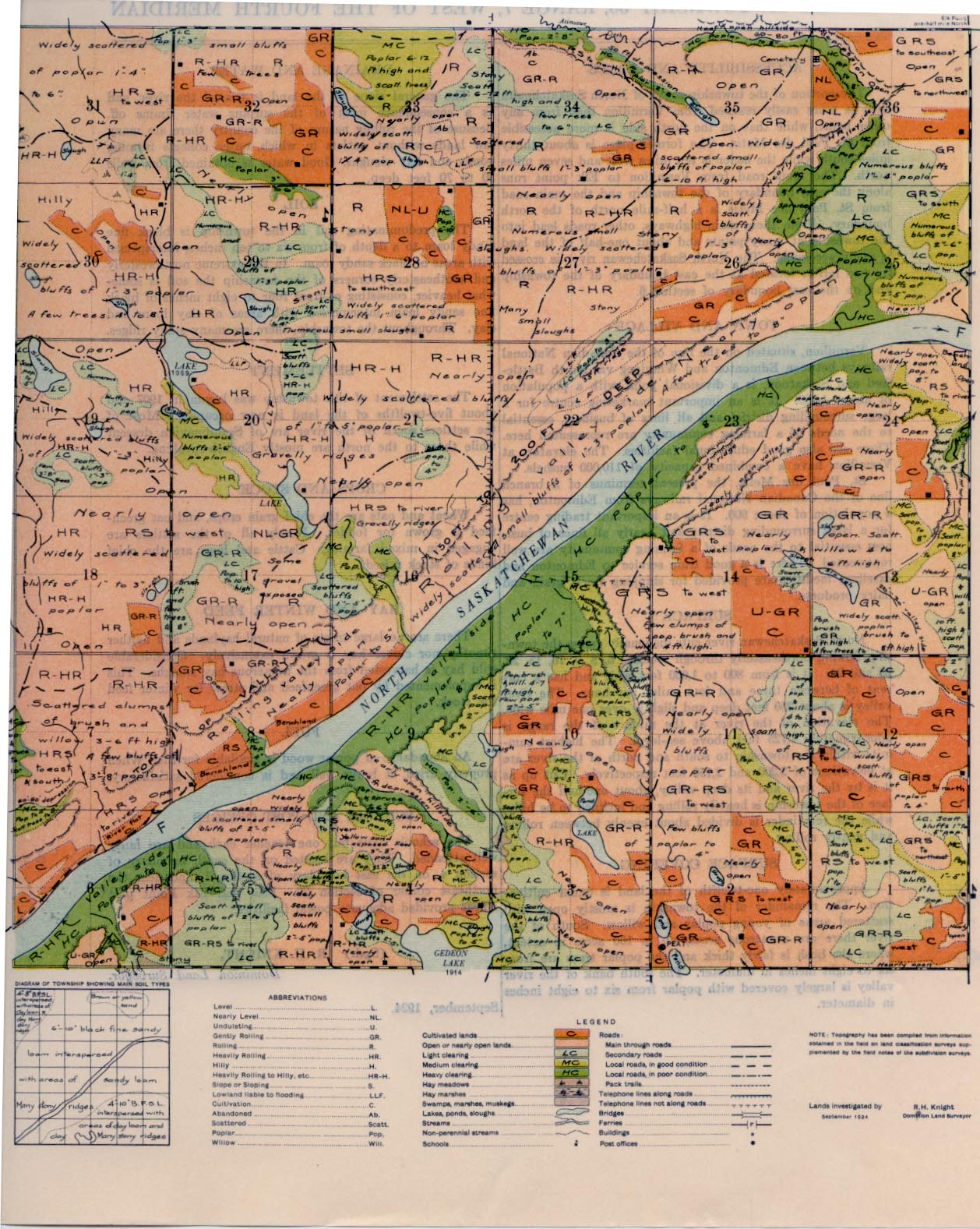 REPORT ON TOWNSHIP 56, RANGE 7, WEST OF THE FOURTH MERIDIAN

SURFACE
North Saskatchewan river cuts diagonally across the township flowing northeasterly through sections 6, 8, 9, 16, 15, 22 , 23 and 25. It is from 800 to 1,000 feet wide and has a current of between three and four miles per hour. The river valley is about 250 feet deep and slightly over one mile wide. The elevation of the river at the middle of the range is approximately 1,725 feet above sea-level. The highest summits within the township to south and north of the river are at elevations of 2,200 and 2,150 feet respectively. Cut up as it is by the river and its deep valley, about one-half the sur- face of the township is heavily rolling and inclined to be hilly, while the remainder is divided about evenly between rolling and gently rolling.

SURFACE COVERING
Approximately one-twelfth of the land is under cultivation. The remainder of the township is mostly open with scattered areas of young poplar and willow. South of the river there are numerous areas, up to 100 acres in extent, where the bush is fairly thick and the poplar trees are from six to eight inches in diameter. The south bank of the river valley is largely covered with poplar from six to eight inches in diameter.

DRAINAGE AND WATER
The general slope of the land is toward the river, and as a consequence most of the surplus water drains off. Because of the rolling nature of the country there are many low lands without outlets in which water collects forming ponds and hay sloughs. Good water is obtained from wells 30 to 70 feet deep.

SETTLEMENT
The settlement of this township was begun in 1907 and about five-twelfths of the land is now occupied. Most of the settlers south of the river are of Scandinavian descent while those to the north are mostly English-speaking.

CROPS AND STOCK
Wheat and oats are the chief grain crops, and oat green- feed is grown for fodder. Nearly all of the settlers are engaged in mixed farming. Cattle and hogs are the chief kinds of stock raised.

HAY AND WINTER FEED
There are no large tracts of natural hay lands and neither timothy nor clover hay is grown extensively. Considerable wild hay is harvested from the numerous hay sloughs. This is supplemented by oat greenfeed and straw for winter feed For stock.

FUEL
An abundance of poplar wood is available for fuel. When properly dried, it burns well and is considered satisfactory.

SCHOOLS AND POST OFFICES
The schools have but one teacher each and are fairly well attended. They are located on the south boundary of section 4, on the east boundary of section 1, and near the northeast comer of section 29. Peat and Elk Point post offices provided adequate postal facilities.