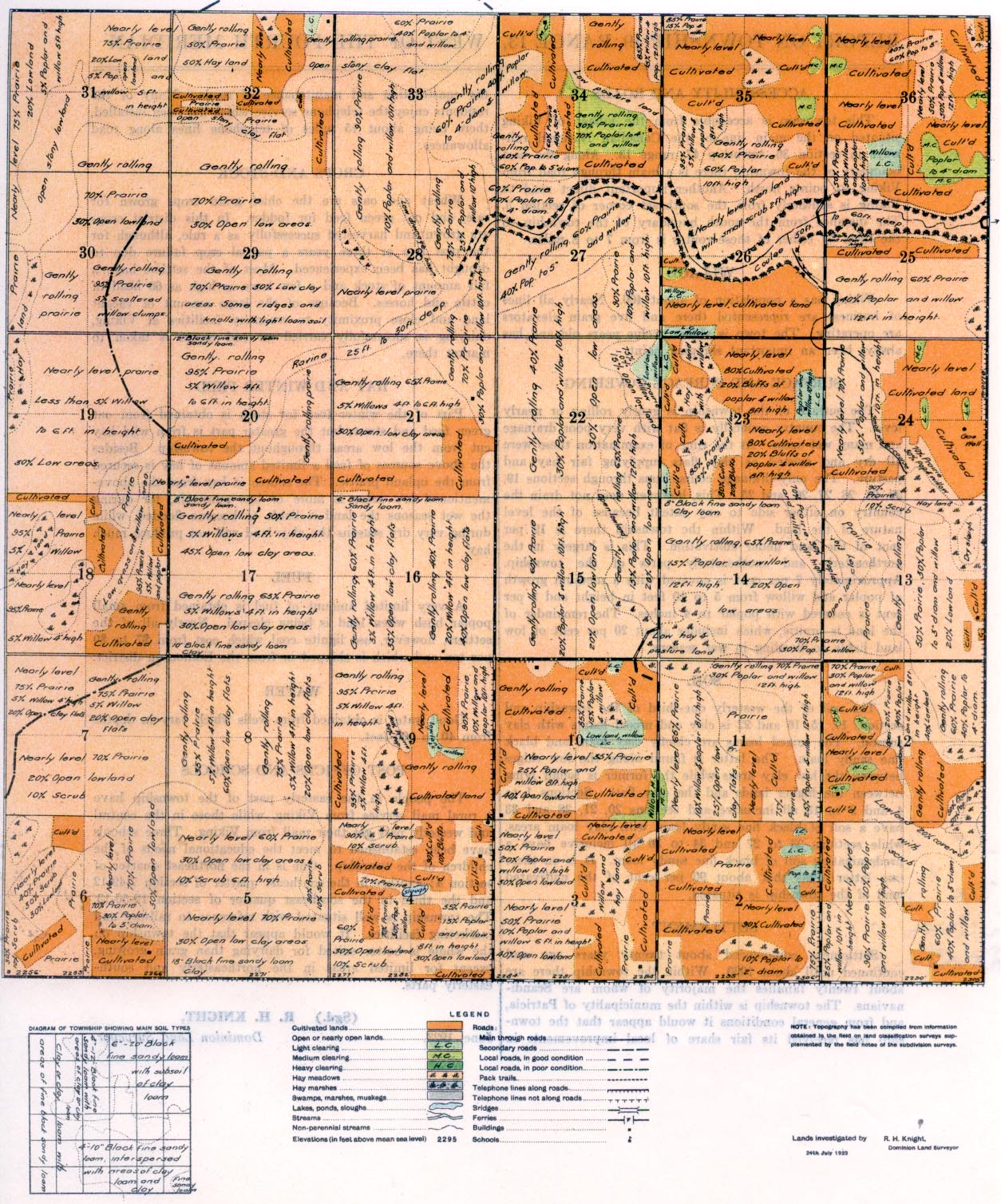 REPORT ON TOWNSHIP 49, RANGE 13, WEST OF THE FOURTH MERIDIAN

This township is accessible from the village of Viking situated on the main line of the Canadian National rail­ways in section 36, township 47, range 13. Along the east boundary of the township there is a main through road from Viking to points north. Another important direct. road to Viking is southerly from the southeast corner of section 3. The distance from the south boundary of the township to the town by either of these routes is from 7 to 8 miles.

Viking has a population of about. 400. Nearly all lines of business are represented there and five grain elevators are operating. The town is about twelve years old and has always been an important shipping point.

The surface of the township is gently rolling or nearly level. The country generally is flat with very poor drainage and many wet areas. At the time of examination these were all dry and existed as clay flats supplying fair hay and pasture. The only drainage course runs through sections 19, 20, 21, 28, 27, 26, and 25. This, however, does not drain the country on either side to any extent because of the level nature of the land. Within the township there is 19 per cent of the land under cultivation. This is largely in the northeasterly and southeasterly parts of the township. Approximately 7 per cent is covered with a medium growth of poplar and willow from 5 to 10 feet in height and 2 per cent. is covered with poplar to 4 inches. The remainder of the land is prairie, which includes' about 20 per cent of low land liable to flooding in wet seasons.

The soil of the westerly one-third of the township and sections 14, 15, 16 and 22 is clay and mixed foams with clay subsoil. The mixed foams are chiefly clay loam and black fine sandy loam. The latter is found along the low ridges between the low clay areas while the former is found lying between the higher lands and the clay flats. Sections 1 to 4 and 9 to 13 all inclusive and sections 20, 21, 28 and 33 have a soil of black fine sandy loam with clay loam areas, while sections 23 to 27 and 34 to 36 all inclusive have a predominating soil of black fine sandy loam. It is on these two latter areas that about 90 per cent of the cultivated land of the township is situated.

Settlement commenced about twenty years ago and continued until about 1920. Within the township there are the construction and maintenance of roads. Many of the residents enjoy the telephone service which has been installed, there being about 15 miles of telephone lines along road allowances. There are about twenty families the majority of whom are Scandi­navians. The township is within the municipality of Patricia, and from general conditions it would appear that the town­ship has received its fair share of local improvements.

Wheat. and oats are the chief grain crops grown for sale, and oat green feed for fodder. In this district crops are grown and harvested successfully as a rule, although for the past two or three years a partial crop failure due to drought has been experienced. Most of the settlers have a fair amount of stock and a few have as high as 60 head of cattle and horses. Because of the large amount of vacant land and close proximity to creamery facilities at Viking, dairying is successfully carried on and cream is taken to market there.

Part of the winter feed for stock is obtained from oat green feed and straw, but the greater part is from wild hay cut from the low areas throughout the township. Besides the above sources of feed a limited amount of hay is secured from the upland prairie. The source of hay from the above- mentioned low areas is more or less uncertain, for during the wet seasons the land is liable to become flooded, while during very dry seasons the clay land will not produce much hay.

A very limited amount of fuel is obtained from small poplar bush when land is being cleared. Nearly all of the settlers, however, use lignite coal which cost from $7 to $9 per ton and which is shipped in from the Edmonton district.

Good water is obtained from wells which vary in depths from 40 to 100 feet.