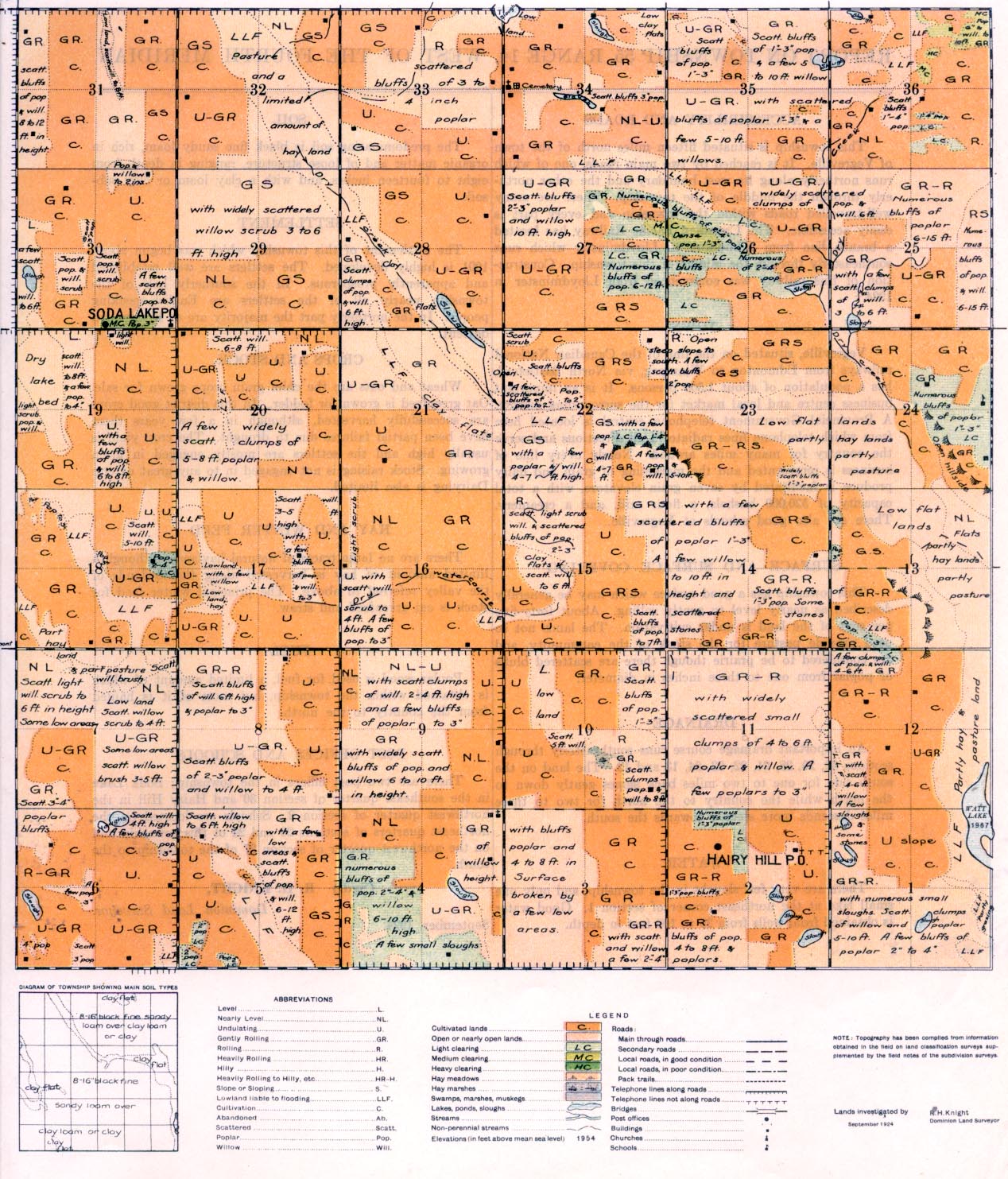 REPORT ON TOWNSHIP 55, RANGE 14, WEST OF THE FOURTH MERIDIAN

ACCESSABILITY AND ROADS
This township is situated fifteen miles north of the town of Vegreville. It is reached by two main roads, one of which runs northerly along its west boundary and the other northerly through the middle of the township. There are many well-travelled roads within the township and every part is easily accessible. The Canadian Pacific Railway has located a branch line from Edmonton to Lloydminster which runs southeasterly through the middle of this township. Construction of this railway was commenced from Lloydminster in 1924.

TOWN
Vegreville, situated on the line of the Canadian National railways from Edmonton to Winnipeg, via North Battleford, has a population of about 1,500 persons. It is an important business centre and local market for the surrounding district. A Provincial Government telephone central is located here from which telephone lines radiate in all directions and serve the country for many miles around. Nearly every line of business is represented and the marketing of grain and dairy produce is facilitated by seven grain elevators, with a total capacity of 520,000 bushels, a flour mill, and a creamery. There are also good schools at Vegreville.

SURFACE AND SURFACE COVERING
This township has a good surface which may be generally described as nearly level to gently rolling. About forty-five per cent of the
land is under cultivation. The lands not so used provide pasture for the stock of the community, and are considered to be prairie though there are scattered bluffs of poplar from one to three inches in diameter.

DRAINAGE
An important drainage course runs southeasterly through sections 32, 29, 28, 21, 22, 23, 24, 13 and 12. The land on the south side for one to two miles back slopes gently down to the north while the country to the north for two to three miles descends more steeply towards the south.

WATER
There are very few sloughs in the township, and only one small lake at the northeast comer of section 1. Good water is obtained from wells from 25 to 100 feet in depth.

SOIL
The predominating soil is black fine sandy loam, rich in organic matter and of loose structure, ranging in depth from eight to fourteen inches, and with a clay loam or clay sub- soil.

SETTLEMENT
The settlement of this township which was begun about 1901 is highly developed. The settlers are well established and apparently prosperous. In the southerly half of the township nearly all of the settlers are English-speaking

SETTLEMENT
The settlement of this township which was begun about 1901 is highly developed. The settlers are well established and apparently prosperous. In the southerly half of the township nearly all of the settlers are English-speaking people. In the northerly part the majority are of Roumanian descent.

CROPS AND STOCK
Wheat and oats are the chief grain crops grown for sale. Oat greenfeed is grown for fodder. In this district good crops are successfully harvested, although in a few years there have been partial failures due to drought. The crop yield is usually high and the settlers are mostly engaged in grain growing. Stock raising is not engaged in to any great extent. Dairying is also limited.

HAY AND WINTER FEED
There are no large tracts of natural hay lands, although a limited amount of hay is harvested along the lowlands of the valley referred to above. The principal winter feed for stock is oat greenfeed and straw.

FUEL
Poplar wood is used for fuel, a limited amount of which is obtained within the township, but most of it is hauled from the country to the north.