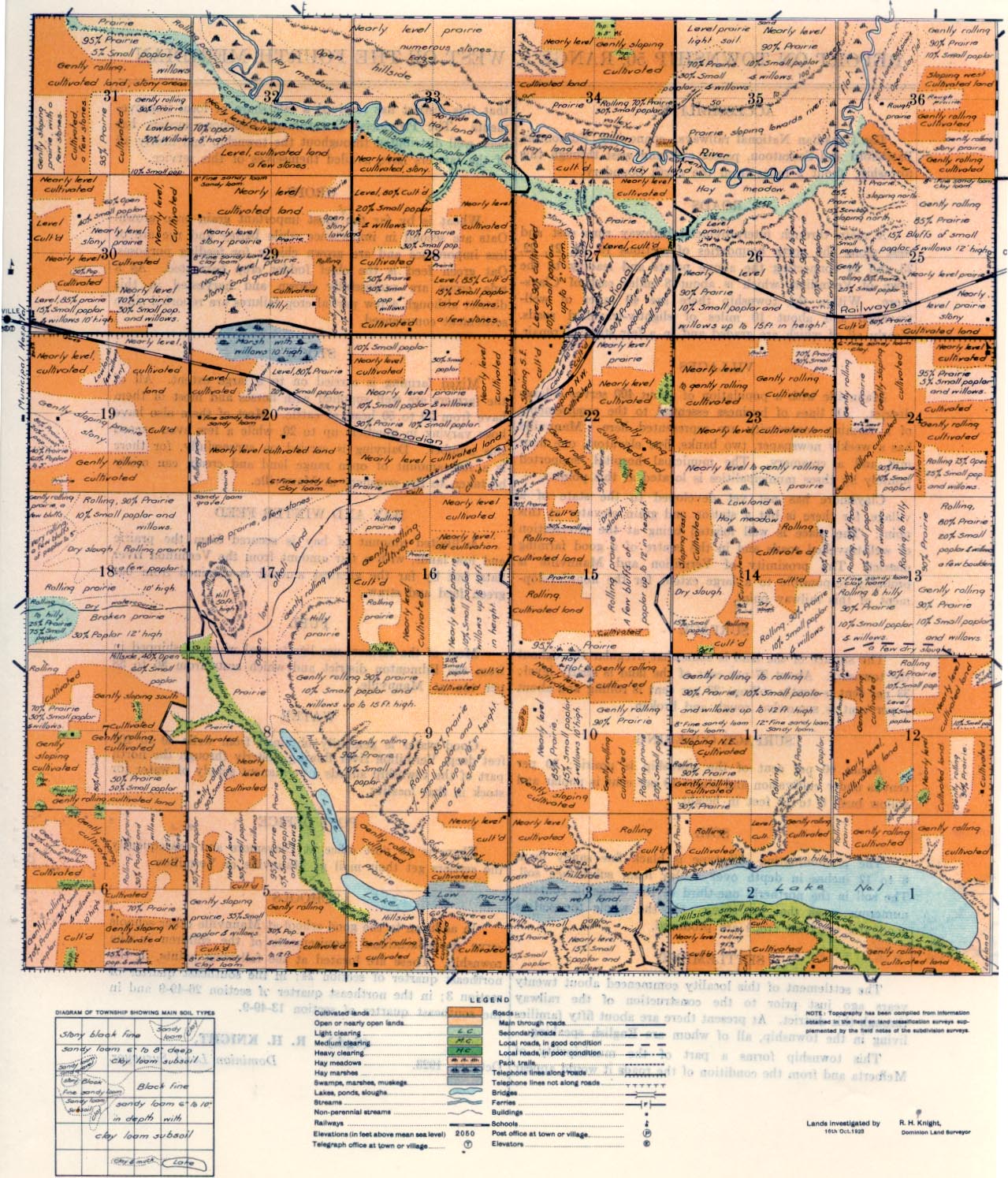 REPORT ON TOWNSHIP 50, RANGE 8, WEST OF THE FOURTH MERIDIAN

ACCESSIBILITY
The Canadian National railways, connecting Edmonton, Battleford and Saskatoon, passes east and west through this township, about 2 miles from the north boundary.

ROADS
A main through interprovincial highway runs east and west along the north boundaries of sections 19, 20, 21, 22, 23 and 24 connecting the above points and leading to the town of Vermilion, which is about 8 miles east of Claysmore. Within the township there are 40 miles of well-travelled and about 10 miles of lightly-travelled roads. Nearly all of which are graded and in a fair state of repair.

VILLAGES
Mannville with a population of about 400 serves a large district. All lines of business essential to the requirements of a farming community are represented here. Mannville has a weekly newspaper, two bank, five elevators, one flour mill and a creamery. The municipal hospital, supported jointly by three municipalities is located at this point.
Claysmore has not yet developed to the state of a village, for there is but a station and grain elevator at this point. The place is well located being at the intersection of well-travelled roads and in the centre of a good farming district. The proximity of Vermilion and Mannville is probably responsible to a large extent for the non-development of this railway point.

SURFACE COVERING
About 60 per cent of the township is prairie; 30 per cent is under cultivation and about 10 per cent is poplar and willow bush 6 to 12 feet in height.

SOIL
The predominating soil type is black fine sandy loam 6 to 12 inches in depth over a clay loam subsurface soil. The soil in the northerly one-third of the township contains numerous areas that are stony. On the whole the soil is good and excellent crops are produced.

SETTLEMENT
The settlement of this locality commenced about twenty years ago just prior to the construction of the railway through this district. At present there are about fifty families living in the township, all of whom are English speaking.
This township forms a part of the municipality of Melberta and from the condition of the roads it would appear that this district has received a fair share of local improvements. The Provincial Government telephone system has been. well distributed
throughout the township and nearly all of the farmers have availed themselves of this service.

CROPS
Wheat is by far the most important grain crop grown. Oats are second in importance while barley and rye are of less importance and are grown chiefly for feeding purposes. Oat green feed is the chief fodder crop harvested. As a rule crops are successfully grown and harvested in this district although a few partial crop failures are reported since settlement commenced.

STOCK
Mixed farming is carried on to a large extent. All of the farmers are well supplied with horses and most of them have from 20 to 50 head of cattle. Most of them also have hogs varying in numbers up to 20, while a few even exceed this number. Dairying is carried on successfully, for there is a fair amount of open range land and cream can easily be taken to the creamery at Mannville.

RAY AND WINTER FEED
A limited amount of hay is secured from the prairie and low lands, with a fair amount from the Vermilion river flats, but by far the greatest amount is obtained from oat green feed and straw.

WATER
Good water is generally obtained from wells 30 to 100 feet deep. Vermilion river flowing easterly through the north part of the township affords a permanent supply of water for 8tock in that locality.

POST OFFICE
There is no post office at Claysmore, and consequently the settlers get their mail at Mannville or Vermilion.

FUEL
Most of the farmers use lignite coal which is shipped in from the Edmonton district and which costs from $6 to $8 per ton at Mannville.