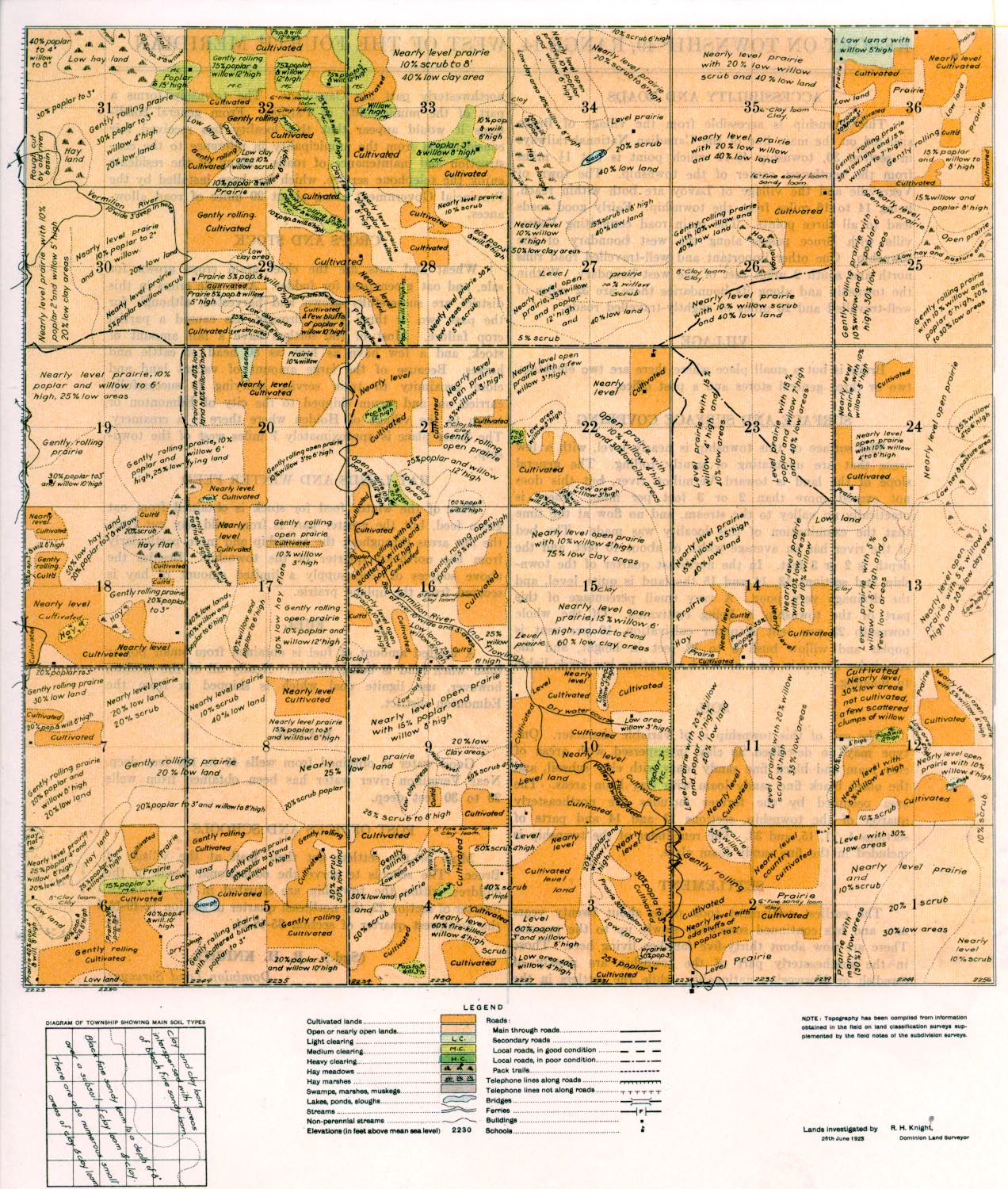 REPORT ON TOWNSHIP 49, RANGE 14, WEST OF THE FOURTH MERIDIAN

This township is accessible from the village of Bruce situated on the main line of the Canadian National railways in Section 30, township 48-14 which point is but 11 miles from the southwest corner of the township. The town of Vegreville and the village of Lavoy are both within reach, being 14 to 16 miles from the township. Fairly good roads lead to all three points. The main road connecting Vegre­ville with Bruce passes along the west boundary of the township. One other important and well-travelled road runs north and south 2 miles east of the west boundary. Within the township and along its boundaries there are 32 miles of well-travelled and 20 miles of slightly-travelled roads.

Bruce is but a small place where there are two elevators, two or three general stores and a post office.

The surface of this township is nearly level, with a few areas that are undulating or gently rolling. The general slope of the land 'is toward Vermilion river, but this does not exceed more than 2 or 3 feet per mile. There is practically no valley to the stream, and no flow at the time that the examination of this locality was made. The bed of the river has an average width of about 10 feet, and the depth is 2 or 3 feet. In the northeast quarter of the town­ship and sections 13, 14 and 15 the land is quite level, and the drainage very poor. A very small percentage of this part of the township is being cultivated. Of the whole township 23 per cent is under cultivation, 10 per cent is poplar and willow bush 5 to 12 feet in height, and the remainder is prairie, part of which comprises low lands liable to flooding.

The earliest settlement took place about twenty years ago, and has continued somewhat slowly up to the present. There are now about thirty-five families living here. Those in the southeasterly part of the township are mostly of Swedish or Norwegian nationality, while the settlers in the northwesterly part are Canadians. The township forms a part of the municipality of Patricia. From general condi­tions it would appear that this locality has received fair consideration from the municipality in reference to the con­struction and maintenance of roads. Many of the residents enjoy the telephone service, which has been installed by the Provincial Government along about 20 miles of road allow­ances.

Wheat and oats are the chief grain crops grown for sale, and oat green feed for fodder. As a rule crops in this district are successfully  grown and harvested, although for the past two or three years, drought has caused a partial crop failure. Most of the settlers have a fair amount of stock, and a few have as high as 80 head of cattle and horses. Because of the large amount of vacant land and close proximity to train service dairying is successfully carried on, and cream shipped to the city of Edmonton or taken to the village of Holden where there is a creamery. The latter place is approximately 7 miles west of the town­ship.

Part of the winter feed for stock is obtained from oat green feed, but the greater part is from wild hay cut from the low areas throughout the township and more particularly from the northeast quarter of the township. Besides the above sources of feed supply a limited amount of hay is secured from the Upland prairie.

A limited amount of fuel is obtained from small poplar bush when land is being cleared. Nearly all of the settlers, however, use lignite coal which is shipped in from the Edmonton district.