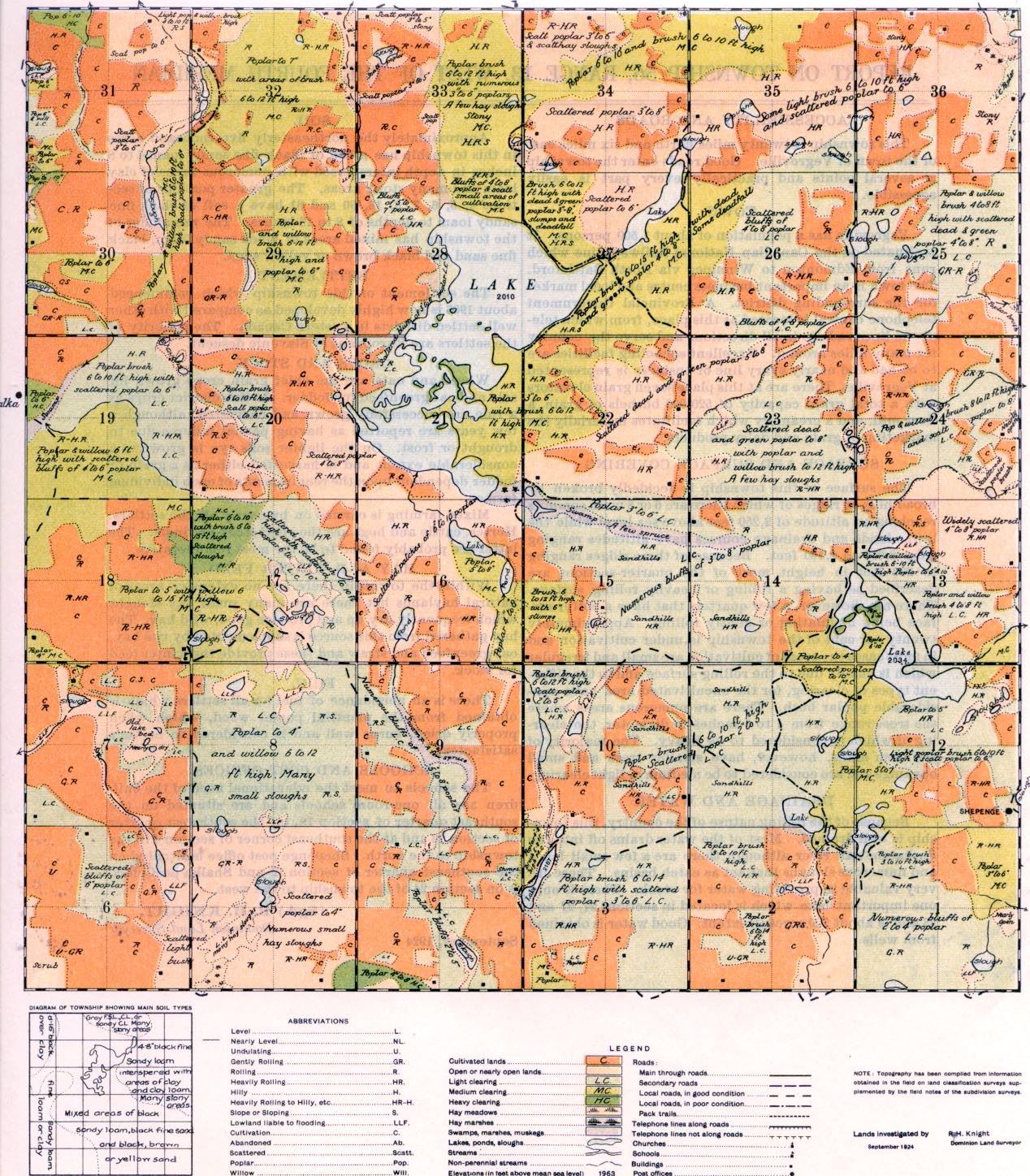 REPORT ON TOWNSHIP 56, RANGE 13, WEST OF THE FOURTH MERIDIAN

This township is twenty miles north and six miles east of the town of Vegreville. Good roads enter the township at several points and practically every part is easily accessible.

Vegreville has a population of about 1,500 persons. It is situated on the Canadian National Railways line which runs from Edmonton to Winnipeg via North Battleford. The town is an important business centre and local market for the surrounding district. A Provincial Government telephone central is located at this place, from which tele­phone lines radiate in all directions and serve the country for many miles around. Excellent schooling facilities are to be had and nearly every line of business is represented at Vegreville. There are at this place seven grain elevators with a total grain capacity of 520,000 bushels of grain, a flour mill, and a creamery which facilitates materially the marketing of grain and dairy products.

The surface of this township is decidedly broken by broad hills or ridges of which there are 6 or 8 main summits reaching an altitude of 2,250 feet above sea level while the lower lands and drainage courses have altitudes ranging from 2,050 to 2,100 feet. Because of these ridges ranging to 200 feet in height, most of the quarter-sections are described as having a rolling or heavily rolling surface. There are, however, a few quarters that have a better sur­face being undulating or gently rolling. Approximately twenty per cent of the township is under cultivation and in most cases the areas of cultivation are small and irregular which is chiefly due to the rolling surface and to the differ­ent types of clearing, for the uncultivated area have con­siderable poplar bush. There are numerous areas where the trees range from 4 to 8 inches in diameter, the clear­ing of which is considered to be heavy. The majority of the bush areas, however, have smaller trees and small openings and are considered to be medium or light clearing.

Because of the rolling nature of the country, this town­ship is well drained. Most of the water drains off into the Saskatchewan river although there are a few small lakes and numerous sloughs that act as catch basins. These are very valuable in providing water for stock. There is only one important lake which is located in sections 21, 27 and 28 and is about 700 acres in extent. Good water is obtained from wells.

The settlement of this township which commenced about 1903 is now highly developed as compared with other well-settled districts in western Canada. The majority of the settlers are Europeans of Slavonic descent.

Wheat and oats are the chief grain crops grown for sale and oat greenfeed for fodder. In this district crops as a rule are successfully grown and harvested, although a few years are reported as having partial failures due to drought or frost. On the lighter soils rye is grown to a considerable extent and is harvested either as a grain or fodder dependent upon the requirements of each individual farmer.

Mixed farming is carried on by nearly all the settlers. Horses, cattle and hogs are the chief stock products. The latter are probably found to be the most remunerative.

Within the township there are no extensive areas of natural haylands but there are many small hay sloughs which frequently dry up and produce good, wild hay. The hay gathered from this source is supplemented by rye hay, oat greenfeed and straw and these provide the winter feed for stock.

There is an abundance of fuel for all settlers which is obtained from the plentiful poplar wood, which when properly dried, burns well and is considered to be very satisfactory.