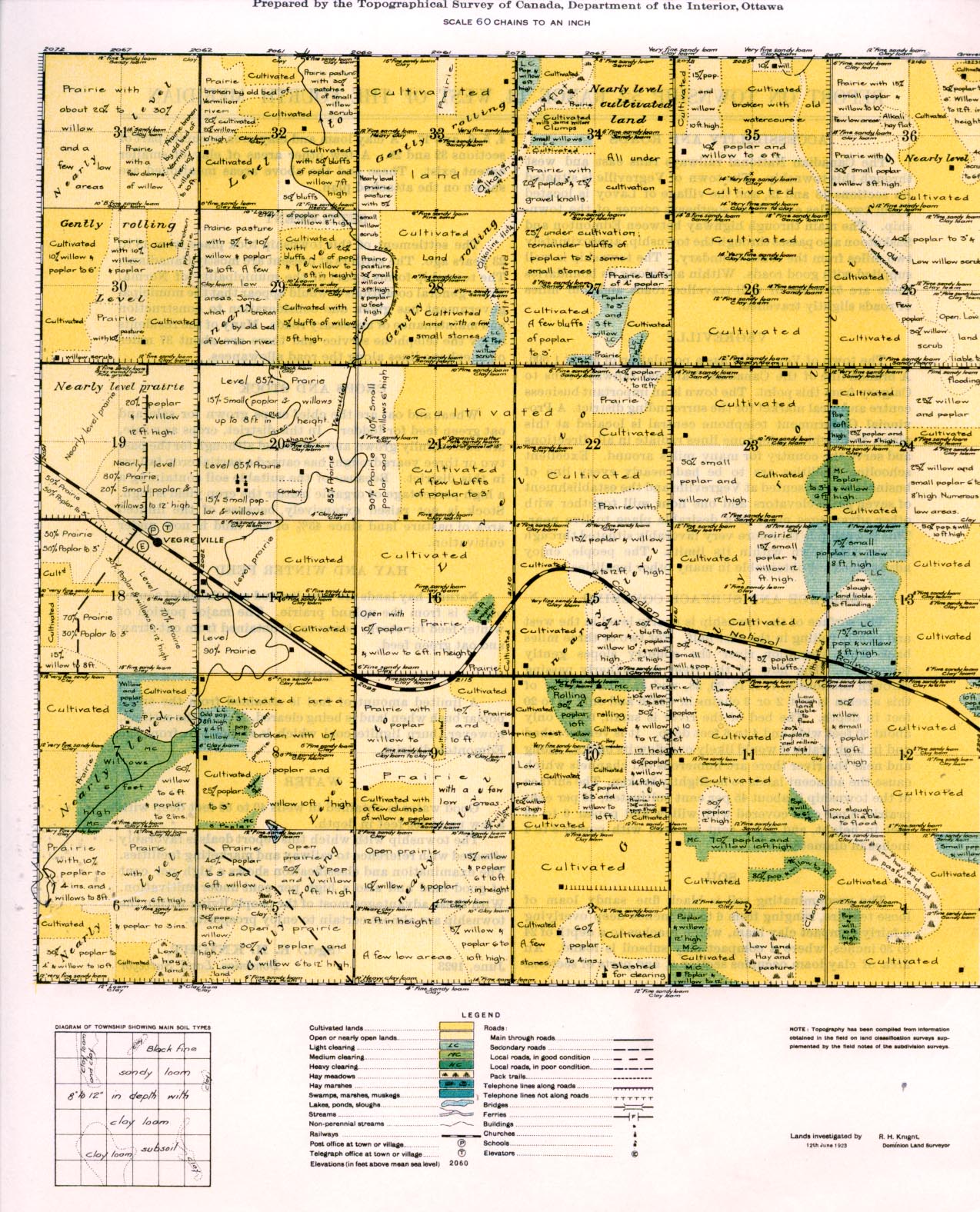 REPORT ON TOWNSHIP 52, RANGE 14, WEST OF THE FOURTH MERIDIAN

The Canadian National railways runs east and west through this township. The town of Vegreville is situated on sections 18 and 19, and the village of Lavoy is located about two miles east of the southeast corner of the town­ship. The main through highway between. Edmonton and Saskatoon also passes through the township, approximately two miles from the south boundary. The township is well supplied with good roads. Within and along its boundaries there are 52 miles of well-travelled roads and four miles of roads slightly travelled.

The town of Vegreville has a population of about 1,500. A branch line of the Canadian National railways runs to Calgary from this point. The town is an important business centre and local market for the surrounding district. A Pro­vincial Government telephone central is located at this place, from which telephone lines radiate in all directions and serve the country for many miles around. Excellent, schooling facilities are to be had, nearly every line of business is represented at Vegreville and the establishment of seven grain elevators and one flour mill together with other advantages make it a desirable place to live near. This township is therefore very favorably situated through having this town within its limits. The people, enjoy advantages not obtainable in many other localities.

The surface of the township is nearly level in the west and gently rolling in the east half. For two or three miles back from Vermilion river the country slopes gently towards it. The flow of the river is northerly passing through sections 6, 7, 8, 17, 20, 28, and 32. The valley of this stream is but 2 or 3 chains in width and only 10 to 20 feet in depth. The bed of the river is small, being only about 30 feet wide and 4 to 6 feet deep. It is very crooked and in high water it would likely overflow its banks. Along and near the river there are numerous old channels which cause the adjacent lands to be slightly broken. The surface of the township is about 45 per cent cultivated, 45 per cent prairie, 8 per cent covered with willow and poplar 6 to 12 feet in height, and 2 per cent covered with poplar 3 to 4 inches in diameter.

The predominating soil is black fine sandy loam of loose texture, ranging from 6 to 12 inches deep overlying a fairly compact clay loam, which reaches to a depth of 24 to 30 inches, where a compact clay subsoil is found. An area of clay loam occupies section 8, and parts of sections 4, 5, 9, and 17. A clay loam and clay area occupies part of sections 32 and 29. A few other areas of clay of smaller extent exist. These and the above areas mentioned are shown on the attached plan.

The settlement of this township took place from 18 to 23 years ago. The settlers at present are mostly Canadians. The township forms a part of the municipality of Norma. From general conditions it would appear that the municipal government has given due consideration to construction and maintenance of necessary roads. Many of the residents enjoy the telephone service and there are about 37 miles of telephone lines along the road allowances.

Wheat and oat are the chief crops grown for sale and oat green feed for fodder. In this district, crops as a rule, are successfully grown and harvested although for the past two or three years drought has caused a partial crop failure in this district. Because of the suitable soil containing a high percentage of organic matter the crop yield is high. Stock is not raised extensively, because of the limited area of pasture land since 45% of the land is now under cultivation.

Natural hay lands are very limited and the chief source of hay is from the upland prairie. The major portion of winter feed for stock, however, is obtained from oat straw and oat green feed.

A limited amount of fuel is obtained from the small poplar bush when land is being cleared. Most of the settlers, however, burn lignite coal which is shipped in from the Edmonton district.

The township with which this report deals is favorably situated with reference to railway and marketing facilities. The examination and classification shows a high per cent of good land and also a high per cent under cultivation. With these advantages most of the people living within the township are almost certain to enjoy prosperity.