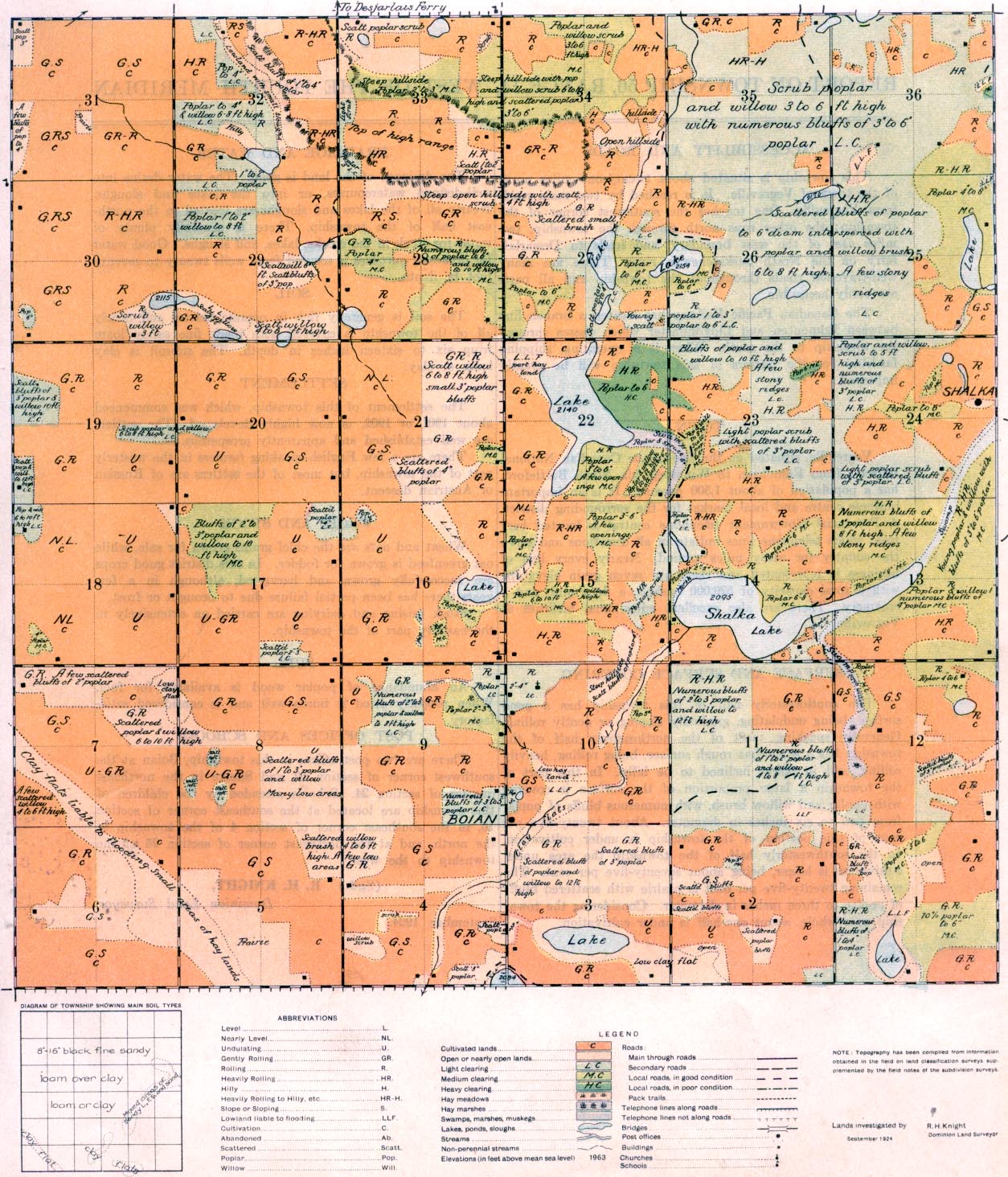 REPORT ON TOWNSHIP 56, RANGE 14, WEST OF THE FOURTH MERIDIAN

This township is situated about twenty-one miles north of the town of Vegreville. It is reached by two main roads from Vegreville. One touches the southwest corner of the township; the other runs north through the township, two miles east of the west boundary, and leads to Desjarlais ferry on the North Saskatchewan river. There are many well-travelled roads throughout the township and all parts are easily accessible.

The Canadian Pacific Railway has located a branch line between Edmonton and Lloydminster which passes through the township to the south. When it is operating, shipping facilities for the settlers of this township will be greatly improved.

Vegreville, situated on the line of the 'Canadian National railways from Edmonton to Winnipeg, via North Battleford, has a population of about 1,500 persons. It is an important business, centre and local market for the surrounding district. A. Provincial Government telephone central is located here from which telephone lines radiate in all directions and serve the country for many miles around. Nearly every line of business is represented and there are seven grain elevators, with a total capacity of 520,000 bushels, a flour mill, and a creamery. There are also excellent educational facilities at Vegreville.

The soil is generally rich in organic matter and nearly all of the township is covered: with black fine sandy loam from six to sixteen inches in depth. The subsoil is clay loam or clay.

The settlement of this township, which was commenced about 1904 or 1902, is now highly developed. The settlers are well established and apparently prosperous.

There are a few English-speaking farmers in the westerly part of the township, but most of the settlers are of Russian or Austrian descent.

Wheat and oats are the chief grains grown for sale, while oat greenfeed is grown for fodder. In this district good crops are successfully grown and harvested, although in a few years there has been partial failure due to drought or frost, Stock raising and dairying are carried on extensively in the easterly part of the township.

An abundance of poplar wood is available for fuel. When properly dried it burns well and is considered satis­factory.