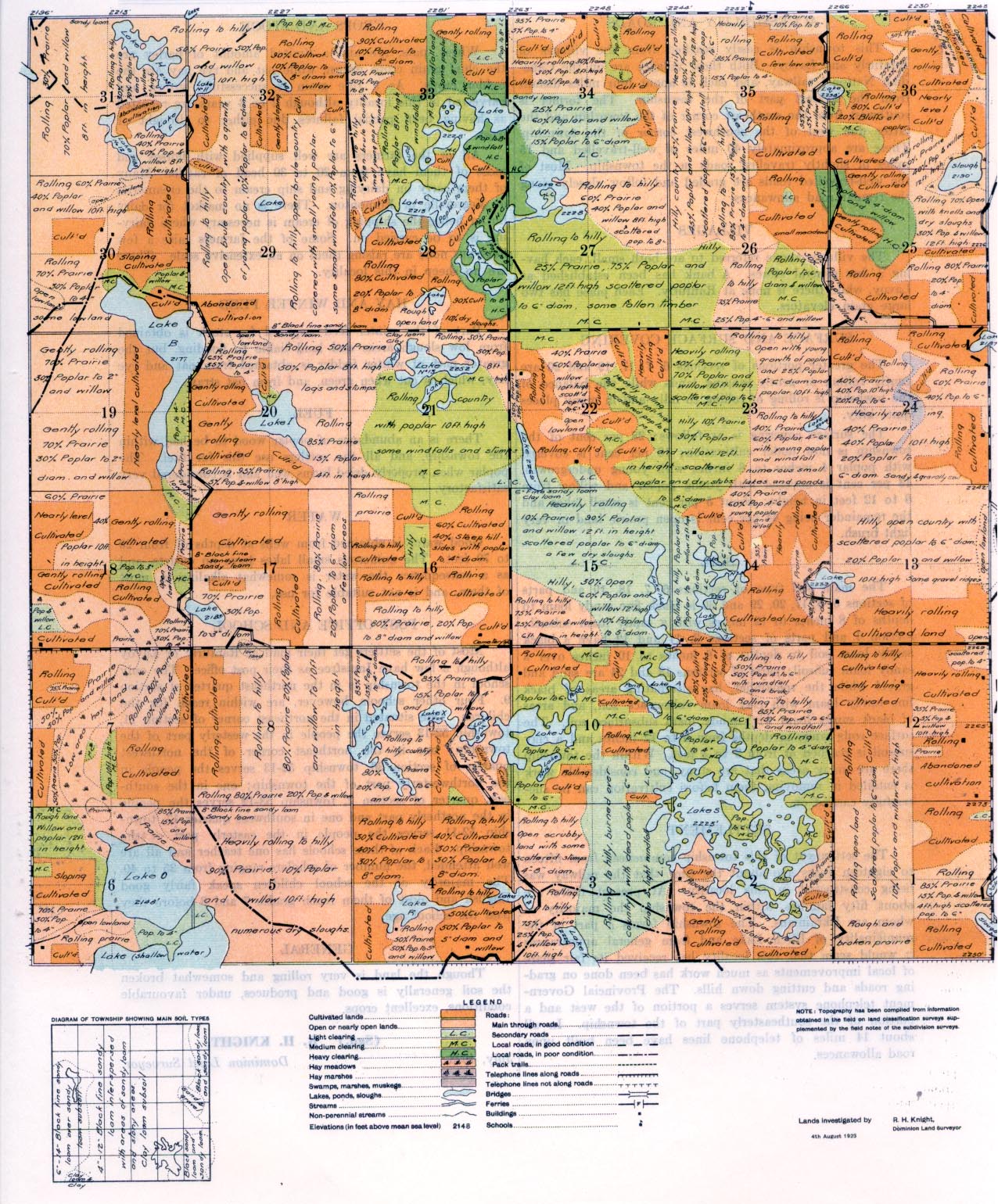 REPORT ON TOWNSHIP 32, RANGE 12, WEST OF THE FOURTH MERIDIAN

The villages above referred to are both small, each hav­ing a few general stores. A bank has been established at. Lavoy, while there is none at Ranfurly. Each place has two large grain elevators.

The greater portions of sections 6, 7, 17, 19 and 20 are gently rolling or gently sloping lands while the balance of the township is rolling or rolling to hilly and in many places quite hilly. The surface covering is as follows: 28 per cent of the township is now under cultivation; 10 per cent is covered with poplar 4 inches to 8 inches with young undergrowth, 13 per cent is covered with young poplar and willow from 6 to 12 feet in height; about 5 per cent is small lakes and the remainder being 44 per cent is open prairie land or very light brush.

The settlement of this township commenced from fifteen to eighteen years ago about the time that the railway was being constructed in this locality. At present there are about fifty families within the township the majority of whom are Ukrainians. The township forms a part of the municipality of Birch Lake and from general appearances it would seem that this locality has received its fair share of local improvements as much work has been done on grad­ing roads and cutting down hills. The Provincial Govern­ment telephone system serves a portion of the west and a portion of the southeasterly part of the township. In all about 14 miles of telephone lines have been built upon road allowances.

Wheat, oats, rye and a limited amount of barley are the chief grain crops grown, while oat and rye hay are the fodder crops. As a rule grain is successfully grown and harvested in this locality although 2 or 3 years are reported as having been partial failures due either to drought or frost.

All of the farmers are well supplied with horses and most of them have from 20 to 30 head of cattle. Many of them carry on dairying and ship cream to the creameries at Vegreville or Edmonton. There is no market for dairy butter hence the shipping of cream is necessary where dairy­ing is to be carried on. Some of the farmers raise a few hogs but none are raising them on an extensive scale. There are no sheep in this locality.

There is an abundance of poplar wood to be had within the township, and all the settlers use this for fuel. The poplar when properly dried burns well and is considered very satisfactory.

Good water is obtained from wells at depths of from 20 to 70 feet. The numerous small lakes have no outlets, and as a consequence the water is somewhat alkaline in most of them, and is not suitable for use.

Though the land is very rolling and somewhat broken the soil generally is good and produces, under favourable conditions, excellent. crops.