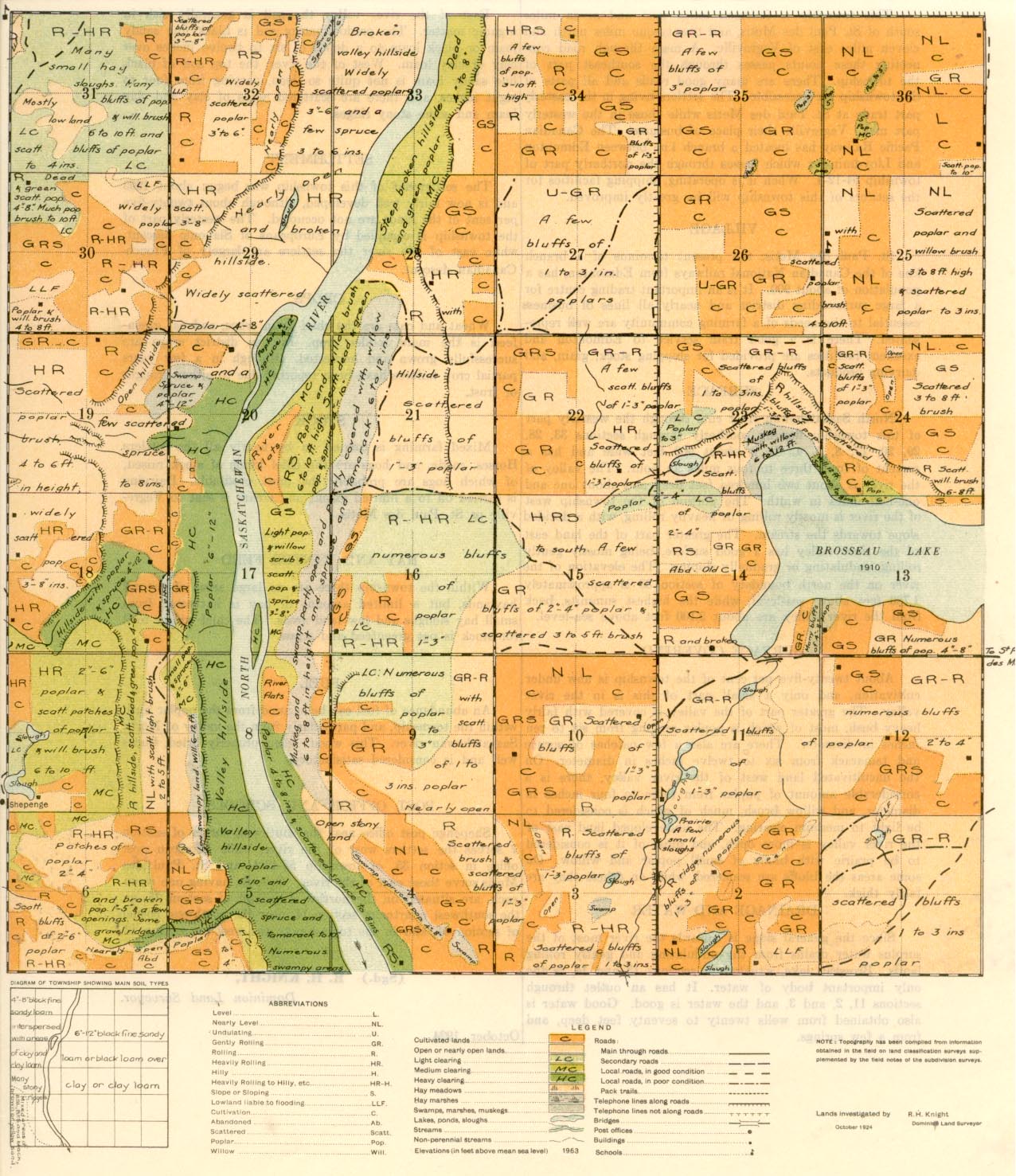 REPORT ON TOWNSHIP 56, RANGE 12, WEST OF THE FOURTH MERIDIAN 3

This township is fourteen miles west and seven miles south of St. Paul des Melds, and twenty-one miles north and eleven miles east of Vegreville. A main through road con­necting these points passes through the southeast part of the township.' There are many good roads and all parts of the township are accessible: The settler living in the easterly part trade at St. Paul des Metis while those in the westerly part make Vegreville their place of business. The Canadian Pacific Railway has located a branch line between Edmonton and Lloydminster which passes through the northerly part of township 54-12-4. When it is operating, shipping facilities for the settlers of this township will be greatly improved.

St. Paul des Metis, the present terminus of a branch line of the-Canadian National railways from Edmonton, has a population of about 900. It is an important trading centre for a large surrounding district and nearly all lines of business essential to the needs of a farming community are well repre­sented. 'There is a goad train service to Edmonton and excellent facilities are provided for shipping stock, grain, and dairying products.

North Saskatchewan river cuts through the westerly part of this township flowing southerly through sections 33, 28, 29, 20, 17, 8, 5, 4. It is about 900 feet Wide and has a current of from three to four miles an hour. The valley of the river is about two hundred feet deep and about one and one-half miles in width. The portion of the township west of the river is mostly rolling are heavily rolling, with a decided slope towards the stream. The greater part of the land east of the river valley has a good surface, being mostly gently roiling, undulating or gradually sloping. The elevation of the river on the north boundary of section 33 is approximately 1,780 feet above sea-level, while the highest summits, back from the river valley are about 2,100 feet above sea-level.

East of the river valley the soil is generally rich in organic matter. The predominating soil is black fine sandy: loam or black loam to a depth of six to twelve inches over clay or clay loam. West of the river, the top soil of black  fine sandy loam is not quite so deep, varying from four to eight inches, and there are scattered areas of clay and ,clay  loam and some stony ridges.

The settlement of this township was begun about 1905 and is now fairly well developed, although, about twenty-five per cent of the lands are not occupied. The westerly part of the township is occupied by Europeans of Slavonic descent. while east of the river the settlers a largely of French-Canadian descent.

About twenty-five per cent of the township is now under cultivation, and only a small part of 'this is in the river valley. The greater part of the valley is covered with fairly heavy bush. most of which is poplar ranging from six to ten inches in diameter. There are also a few patches of spruce and tamarack from six to twelve inches in diameter. On the uncultivated land west of the river valley, there is a considerable amount of poplar from three to four inches in diameter, and willow brush, much of which is considered to be light to medium clearing. The undeveloped land east of the river valley is more open, and most of it is considered to be prairie with bluffs of small poplar and willow. On some areas the bluffs are scattered, while on others they are fairly thick.

Since the general slope is towards 'the river most of the surplus water drains from the undulating and gently rolling lands. Brosseau lake, situated in sections 13 and 14, is the only important body of water. It has an outlet through sections 11, 2, and 3, and the water is good. Good water is also obtained 'from wells twenty to seventy feet deep, and from a few springs crops

Wheat and oats are the chief grain craps, and oat greenfeed is the main fodder crop. In this district. crops are successfully grown and harvested, although in a few years partial crop failures have been reported due to either drought or frost.

Mixed farming is carried on by nearly all the settlers. Horses, cattle, and hogs are the chief kinds of stock raised, of which hogs are probably the most profitable. Dairying is carried on to a limited' extent and cream is sent to Vegreville or St. Paul des Metis.

Within the township there are no large areas of natural haylands, but a limited amount of hay is 'harvested from small hay sloughs and low land areas. The chief winter feed for stock is oat greenfeed and straw.

An abundance of fuel can 'be secured from the poplar bush within the township, and particularly from the valley of North Saskatchewan river. This wood, when 'properly dried, burns well and is considered satisfactory.