I was born in 1919 in the district known as Gratz located ten miles Southeast of Elk Point. I started school in 1926 attending Willow Range, a one-room school that had a second room added to it in 1928. The two rooms housed between fifty and sixty pupils, ranging from grade one to grade twelve under the supervision of Mr. Wm. Trefiak and Mr. Teresio. To get to school we walked, crossing fields in good and inclement weather. Later we travelled by horse and sleigh. To get to town our transportation then was horse and sleigh in winter and buggy in summer. When I was old enough to help my parents with farm work, I helped clear trees by axe and grubhoe to add more acres to cultivation. Land then was broken by horse and plow. No one knew or heard of Catterpillars or bulldozers. I attended school until 1936, then thinking I had enough school I quit and went to work for Mr. Joe Helm, a general merchant in Elk Point at that time. My wages were thirty-five dollars a month. Out of that I had to pay twenty dollars for room and board. Finding it hard to make ends meet I quit there and went to work for Mr. Claire White on a farm in the Clandonald district. It was there I made enough money to buy my first means of transportation-a C.C.M. Foot Mobile (bicycle). When my parents acquired more land I returned home to help them until I enlisted in the army in 1941.1 served in the army until 1946 being stationed in western and eastern Canada and sixteen months in Jamaica. After being discharged from the army, 1 came back to the farm and bought more land and machinery. After raising six boys and two girls and farming for forty-eight years my parents decided to retire to Elk Point, where they lived till Dad's passing in 1968. Mother still resides in town. Their children were and are Bill at Lloydminster, Carl of Elk Point, Frank of Clandonald (deceased in 1965) Eugene of Calgary, Joseph of Revelstoke (deceased in 1976) Edward of Kamloops, British Columbia, Pauline (Herzog) of Vermilion, Maryanne (McGinnis) of Spedden. After my parents moved to town I farmed alone for several years, but help was what I needed, so I married Olga Shymkiw (Mrs. Frank Dembicki) in 1966. Olga was born in 1928 attended the Willow Range school to the age of fifteen. Some of her teachers were Miss Ursiliak (now Mrs. Mike Osinchuk) Mr. John Bracko, Mr. Steve Urchak. After leaving school she went to work in the Elk Point hospital, till she married my brother Frank in 1948. They farmed in the Landonville district. 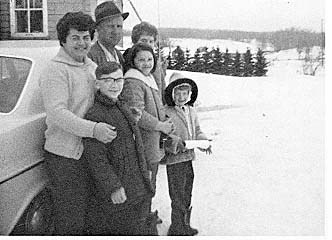 They were blessed with their first child Daniel, in July of 1956. In 1957 they bought a country store, and in April they had a daughter Dianne. From here the children attended Louise Lake School. Who should be their teacher but Mrs. Mike Osinchuk. They lived in the store and farmed until Frank's passing in 1965. After our marriage we farmed one section of land N.E. -2-56-6W4th Mer. S.E.11-56-6W4th Mer. and the west half of l-56-6-W4th Mer. for a number of years, taking part in the activities in Northern Valley Catholic Church, Willow Range Community Hall, later King George Hall. I was also on the board of directors of the Alberta Wheat Pool, and North East Alberta Livestock Cooperative. Our children attended Elk Point schools travelling by bus. Daniel graduated in 1974, and went to work for a year at the Lindbergh Salt Plant, then decided to go back to school. After two years at N.A.I.T. taking Respiratory Technology, he graduated and upon writing his Registry he received the highest marks in that field across Alberta, winning himself a plaque and an award.

At present he is working in the Royal Alexandra hospital. Dianne graduated in 1976 and went out to try her wings. She worked for a while at Lloydminster and at present is working with Social Workers at Mannville.

We farmed the land until 1974 then decided to take life easier, listing our land for sale. In 1976 we sold our land to the Craig Campbell family, built ourselves a home in Elk Point and are really enjoying semi-retirement.