Our Dad, Loyola Odonivan, was born November 15,1881 in Iowa. He came from Glencoe, Oklahoma, in 1904, to Alberta to the Allendale district near Campbell Lake where he stayed with his sister, Ivy DeFord who had taken a homestead there previously. While staying with her he sent for his mother, Mary Alameda Laughlin, and sister Sylvia, who came in 1905. His father, James Laughlin, known as Dr. Jim Laughlin, came from Ireland as a country doctor. He passed away in the flue epidemic when the children were small and left Grandmother to raise a family of nine, which was not easy in those days. She painted pictures and peddled them among the Indians to help with her living.

There was a strip of land called the Cherrokee Indian Reservation that was opened up for sale to the Whites. Grandmother entered a team and wagon and won her race which gave her a strip of land. This was their home until they came to Canada. 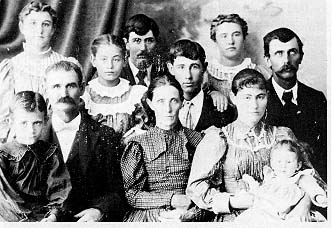 Dad homesteaded S.W.-16-51-5 and his mother N.W.-16-51-5 in the Morrison school district. On January 10, 1911, he married Elizabeth May McClain in Vermilion. She was born February 12,1884 in Stillwater, Oklahoma and came to Canada with her parents, Margaret and Sam McClain; two brothers, Grover and Lewis; and one sister, Dolly (Aunt Tod), in the spring of 1910.

Dad lived with his mother on her homestead until he was married then moved to his own. They had a family of three girls, Alberta, Irene, and Hazel Dean when they moved north of the river in the spring of 1915. They had the misfortune of losing their home by fire while in the Morrison area. Dad bought the quarter S.E. 18-57-5 in the Spring Park area from Pete Larson. They lived in the old house north of the creek until 1917 when a new frame house was built on the hill south of the creek. In September of 1918 a baby boy was born, Ray Odonivan, and in February of 1921 another boy, Calvin Lauder. Mother did not go to the hospital for any of the five children. They were all born at home. Mother was often called out to other homes to help with child birth.

Dad farmed some with horses. He raised pigs, chickens and cattle tro help with our living. They milked cows and the cream had to be taken to Vermilion. Wheat was taken to Vermilion with team and wagon to be made into flour. I can recall us all sitting around the table at night cleaning a little pile of wheat and Mother would grind it in the coffee mill for our porridge next morning. I can also recall us going a short distance from home with team and wagon to pick berries. We took wash tubs for blueberries and hundred-pound-flour sacks for cranberries. There was all kinds of wild fruit so very little tame fruit was bought. Money was very scarce so there wasn't much to hand out to children. We wanted to buy Mother a birthday present so when we gathered eggs we tucked one or two away until we got enough, then we sold them and bought her a fancy plate.

Our entertainment was house parties, community picnics etc. We has to travel with horses to go very far. This made the neighbours closer together than today.

Dad spent time as councillor, was on the school board and was very active in community projects. In 1917 he and Ed Kepke hauled material from Vermilion with team and wagon to Build Spring Park school which is still standing today. Previous to this the school was a little log shack on the Freeman place where the Russells now live. Sometimes Mother used to take the two girls on a stoneboat. Most of the time we walked one and a half miles to school.

In March, 1926, another was added to the family, a baby girl, Viola. This was the first baby born in a hospital, which was Dr. Miller's hospital in Elk Point.

The lighting systems in our homes were usually coal oil lamps. If we happened to be out of coal oil we made a light by putting a piece of cloth around a button, tying it and setting it in a dish of melted grease. This was known as a "bitch wick".

There were many home remedies. If there was a flu epidemic or cold going around we were made to wear a bit of asafetiida tied in a cloth hung around our neck. For cough or colds a few drops of pine tar were placed on hot cloths to make a smoke. Poultices were made of onions and put on the throat or chest. A cough syrup was made of mashed up onions and sugar or honey. 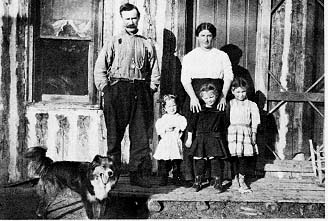 with daughters Hazel, Alberta, and Irene, 1917.

The family grew up, each one going out to work as they became old enough.. Brother Ray went to the United States at the age of seventeen. He married and made his home there. He came back for a visit in 1975 and passed away at he age of fifty-seven. Dad left home and Mother remained on the farm with Calvin and Viola. Calivin helped farm until he joined the air force. Mother lived alone for a while, then sold the farm to Jack Booth. It changed hands again but the old house is still standing. Mother made her home with some of the family until she passed away in August of 1953.