I was born in Sweden in 1887 and first came to Caskeyville in the fall of 1911, after working on construction of the Grand Trunk Railway and as a blacksmith near Revelstoke, B.C. My brother, Victor, Oscar Persson and I came to this area to trap muskrats and we were quite successful in this endeavour.

That winter I took a homestead west of Caskeyville, about one-half mile northwest of Stony Lake. We got our mail about once a week at Caskeyville P.O. and bought groceries at a store operated by Mr. Screeton and Jack Valentine at Hopkins. Jack Valentine freighted all their goods by oxen from Vermilion.

We carried our groceries home on our backs, walking about nine miles each way. I recall that Oscar Persson once carried a one hundred pound bag of flour on his back from Hopkins to Caskeyville, a distance of three and one half miles, stopping to rest only once. Our groceries were flour, rolled oats, sugar and coffee. Breakfasts consisted of rolled oats porridge without milk, and pancakes. We hunted rabbits and partridges for meat, and occasionally fished in Stony Lake. We had potatoes sometimes but they were heavy to carrv.

Before I came to Caskeyville, I had spent some time working at small sawmills in British Columbia, so I had learned something about the machinery involved. About 1915 I bought a small sawmill and did mostly custom work for other homesteaders. As I had no power for the mill myself, I made a deal with Joe Mabley, who had a Case steam tractor of seventy-five horsepower. Later I bought a small steam engine myself and used it for a couple of years before trading it to Eddy Spencer for his sixty horsepower steam tractor and threshing machine. Most of the threshing I did was in the St. Paul area.

In the meantime I was farming my homestead and had married Tilda Persson from Sweden. Our five children: Carl (Eddy), Ruth, Ellen, Clarence and Gladys, were born on the homestead. We had a reasonably good log house, a barn and about fifteen head of cattle. My younger brothers, Charles and David, came from Sweden during these years.

In 1925 we moved to McMurdo, B.C., where I operated a sawmill until 1932. I did fairly well there in the Columbia Valley until my timber was depleted. When we moved back to Armistice in October, 1932, with the sawmill machinery, Grant Arnold helped me unload it and move it to a site east of Moose Mountain. Grant remarked that I must have made a lot of money in B.C. to afford to ship my large steam engine that far. "Most of us who have stayed here couldn't afford to move a backhouse." Remember, this was in depression. 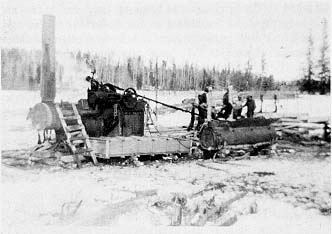 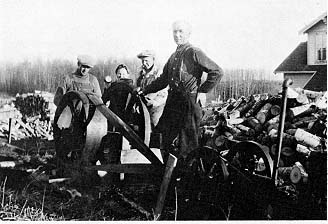 I bought a half section of land, later another section, six miles west of Elk Point, which I farmed until 1950. My children attended Richland School, which was one and a half miles away.

During the years between 1932 and 19411 operated the sawmill every winter at locations near Primrose and Cold Lake and did planning in the summer. Farming was done in between these seasons.

My first wife died in 1938 and I married Margrette Lorenson in 1941. Our son Roger was born in 1945. He is now a welder, married, two children, living in Abbotsford, B.C.

The last farm was completely sold at an auction sale in November, 1950. Taking my wife and son and John Deere, plus some items and a planer, we moved to Lumley. With Dave Peterson as partner we did logging.