Born Nikolay Shkraba in Wostok, six miles west of present day Andrew, Sept. 2,1903, Nick Scraba has a birth certificate that states he was actually born August 24, 1902. However, he is a vigorous, healthy man with a terrific sense of humor, who farms his own land and tends his own cattle.

At one time he was a car salesman in Andrew. He cut quite a swath when he was courting Vera Cholack (then sweet seventeen) in a polished black Chev 1922 touring car. They were married November 25, 1930.

Nick went into partnership with a friend, running a butcher shop and confectionery in Smokey Lake. It soon became difficult to support two families off one store so Nick started to look for greener pastures. He had heard that Elk Point needed a butcher shop and confectionery so he sold his share of the business for $260.00. Borrowing all the money he could, he built a store (with a home attached to the back), stocked it completely, and wondered how he was going to pay back the $1200.00 it cost photos Vera and their two daughters joined him in the spring of 1934, hopefully to become a prosperous family in the community of Elk Point. They soon made many friends -- Libichs, who ran the livery barn; Cromwells, who rented the hotel, and Joe Mah, who had a restaurant.

However, W. Andrishak and C.A. Johnson already had two busy stores in town, and Nick came to realize that in those "dirty thirties" there wasn't enough business for a third. In 1937 he went prospecting for gold. Zenko Yacyna and he hit pay dirt on the North Saskatchewan River, four miles east of the present bridge. They were each making 45~ a shovelful late that fall. The ground froze; when they went back in the spring, the area was under twelve feet of mud. Nick recalls that, for all the prospecting they did, the money only averaged $2.10 a day. Gold was $23.50 an ounce; he sent the dust to Edmonton, and they sent the money registered, all hard cash in rolls. When the mosquitoes got so bad that Zenko started shooting them with the shotgun, Nick had enough.

There were more children in the family now, still all girls. Nick decided on making cement well cribbing and culverts. Cement was 60c per bag and the country had lots of gravel. He sold his first well cribbing, three feet by thirty inches, for $4.00 to Zenko Yacyna and his first culvert, which was three feet long for $1.00 per foot, to the county. He also started making tombstones for $11.00 each, with his wife doing the engraving. He put a tombstone in the back of a friend's truck and went to Derwent area to advertise. When he returned home, he had $32.00 collected in advance orders. However, he needed a vehicle to transport his goods, and the orders were starting to come faster all the time. After much bargaining, he bought a 1927 Chev from Nick Sakowsky for $55.00, and agreed to pay for it when he got the money from his orders. Nick still had to buy a license and he had only lOc in his pocket. Back he went to Mr. Sakowsky and explained that he couldn't buy the truck if he didn't have a license. So Mr. Sakowsky gave him $10.00 he needed. Nick was still in a bind. He didn't have any money for a driver's license. So back he went to Mr. Sakowsky, who got so mad he threw a hammer at the wall and hollered, "What do you think I am? Your father? ! ! " But he gave Nick the $1.00 he needed.

By late 1938, Nick had a booming business and was hard pressed to keep up with demand. His day began at 4 a.m. He hired John Olykse to help him when he worked out of town laying tombstones. On such a job near Lafond, John was mixing gravel while Nick was mixing, pouring water and dumping. Suddenly, John dropped the shovel and clutched his back. "Oh, my back." he moaned. "I can't breathe." Nick helped him sit down and told him to rest. He worked for a while, then came over to John. He was white as a sheet, sweating and grunting with pain with each breath he took. Nick said, "I got to get you to a hospital." "No", grunted John. "You do as chiropracter does. I show you how." John lay on his stomach and told Nick to feel his spine until he felt one vertebra protruding a little further than the others. Nick found it. "Now" said John "you put one hand over the other and push as hard as you can." Nick was young and strong, so he put his hands together over the spot on John's back, straightened up on his knees and pushed as quick and as hard as he could. There was a crack, John squealed, his eyes rolled up, and he flopped out cold. "John! John! Nick cried, shaking his head. "I killed photos" Nick ran frantically around in circles, wondering what to do. Finally he spied the water barrel. He dumped a great whoosh of water over John lying on the ground. He blinked his eyes! Nick was so grateful he got on his knees, hugged John and thanked God he was alive. He told John "I never been to chiropractor and I never will be! You lay quiet. I get you jacket and cover you up. You rest good." About half an hour later John said he felt fine and wanted to get up. Against Nick's protests, John got up and started to shovel gravel again, just like he was before.

Nick decided to put some of his money into cattle. He bought several calves for $2.00 to $4.00 a calf. He rented the farm he presently lives on from Mr. Nielson. Within a few years he had a herd of forty-two cattle. Just when he thought he could buy the place, there was a terrific electric storm one night. Nine of his three-year-old steers ready for market huddled under a spruce for protection and were struck dead by lightning.

By 1940 he managed to buy the farm and two milking cows. He began to bottle milk and sell it to town residents. Some of the first customers were Mrs. Pawlyk, Mr. Cromwell of the hotel, and Mr. Libich. The milk was delivered to the door at l0 cents a quart and 5 cents a pint. Soon the milk business expanded such that the farmily was milking ten cows and selling the milk to town. By 1947, Mr. Scraba was able to build a new home on his farm for his wife, six daughters and one son. The whole family shared the responsibility of delivering milk to the community morning and night. This meant getting up at 5 a.m., milking up to eighteen cows (by 1954 they had one Surge milking machine to help), sterilizing bottles, packing the milk and delivering it before school. After school, they repeated their work, selling the milk now at 18 cents a quart and 9 cents a pint. 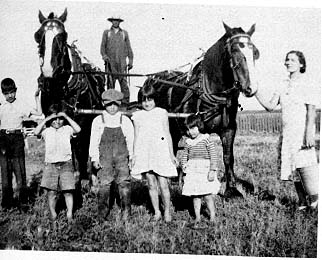 Nick lost his wife due to illness in July of 1958 but the children and he continued to process milk until 1961, when the dairy herd was sold to John Zayonce. He still had a herd of sixty range cows that needed hay and grain. His youngest daughter finished high school and went to the University of Calgary in 1965.

"Papa Nick", as his family fondly calls him, is a man of the true pioneer spirit. He continues to farm and take care of his cattle herd (now reduced) by himself at the age of 74 years. Life has been, and continues to be, interesting and challenging for photos