Elk Point has been the meeting place of a great variety of people. Many of us came speaking many different mother tongues, but we all had one thing in common: a sense of adventure and a great hope that the new prairie land could offer us a good life.

My father spoke Gaelic and I was brought up in a totally Scottish community in Cape Breton, Nova Scotia. My father carried a mid name. Those names distinguished one "Mac" from the other and were graphic, if somewhat biting at times. He was "One-eyed-Dan-of-the-Klondike". He had tried his fortune in the early 1900's and paid for it.

My mother's people, Pennsylvania Dutch, were United Empire Loyalists by the name of Grantmyer. They came to Nova Scotia and were rewarded for their loyalty to the crown by being given a grant of land. The price for this was three peppercorns and the deed was signed by King George III.

However, for my generation, Cape Breton offered no adventure and little prospect. At eighteen years of age, I boarded a harvester train with a neighbor boy and began my trip west. In the fall of 1916, the C.N. had no restaurant cars, board slat seats, and no shower or changing facilities. During our nine day trip, when the train stopped, we rushed off the platform to a local store and bought bread, milk and cheese; our unvaried diet for twenty-seven consecutive meals.

In Winnipeg I stopped to visit Cape Breton family friends. There I got a letter of introduction to an uncle of theirs who was a lawyer in Edmonton.

From the train I could see the dawn to dusk work pitching hay and building elevators. I hoped for a school.

I stayed my first night at the old Selkirk Hotel. The next morning I delivered my letter of introduction. The lawyer asked me what line of work I wanted. I told him I was looking for a teaching position and asked directions to the Department of Education. He said "Don't bother going there. Just come back here tomorrow and I'll have someone to see you." Next morning I returned. The gentleman I was introduced to was the Deputy Minister of Education himself. He mentioned a new school district at Spring Park. I said I would like to try it.

The lawyer gave me directions as to how to get to Vermilion, but there his geographic knowledge stopped. At Vermilion I heard a Mr. Monkman was the mail carrier. I met him and he agreed to take me to Elk Point.

Mr. Charles Hood owned the hardware store in Elk Point. The post office was contained in the same building. He was my first contact. Their home proved to be always open, warm and hospitable. They had their living quarters at the back of the store. The walls were lined with shelves of books of good literary quality. I borrowed and returned them weekly.

I was still not at Spring Park but this was a Saturday. Mr. Hood assured me the Saturday night dance would bring people from there and I would get a ride to my new school and boarding place.

Mr. and Mrs. Lester Smith provided great kindness and good food while I was principal of my first five-room school. In actual fact, the only room of the abandoned house that was "the school" was the kitchen. The other rooms were crammed with grain, farm implements and discarded furniture. However, my twelve pupils, ranging from grade 1 to 6, were all seated there and we were grateful for the heat of the kitchen stove before long. They were eager and responsive children.

My first monthly cheque was for $65. It was the only cheque in my life I carefully put away until the next month. I gave the Smiths one dollar a day for room and board. So I was left with $35, and a contract signed with Mr. Laughlin to last until Christmas. My salary in Cape Breton had been $12.50.

Names in that first class? The Laughlin girls, Kepke and Holley children. The town itself: There was the pool room, Caskey Hotel, Mr. Charlie Markstad's Implement Shop, and two grocery stores which were owned by two Johnsons and were in stiff competition.

Eventually my sister Blanche came out and taught in the Elk Point School. She later married Charles Markstad and it was then that I learned to drive a car. Mr. Markstad had the Ford dealership and we often went together for rides through the country. One Saturday he asked me to go with him to St. Paul, Bonnyville and around by Lindbergh. It was after dark when we were on our way into Elk Point and the Ford T Model suddenly coughed and died. We had no gas, and the only solution was to walk the remaining two miles into Elk Point, fill up a two gallon tin, and come back. When the tin was filled, however, Mr. Markstad said, "How would you like to go yourself and bring the car in? " "But I've never driven" I said. "You'll make out all right", he said. "Just take your time." 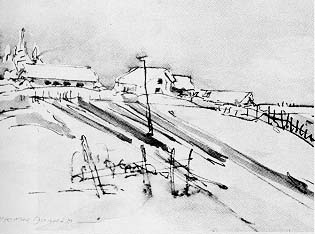 The walk back to the car was one of anxiety as I tried to remember the different steps necessary to starting. The gas went into the tank under the front seat; an explosive situation to begin with. I then adjusted the two levers on the steering wheel, then sped around to the front, pulled out a wire choke, cranked the engine and then rushed back to adjust the lever again before the engine stalled. Fortunately I got through the performance and sat clasping the steering wheel, too scared to press the floor pedal. But, with time and caution, it all seemed to work out slowly and I arrived back into Elk Point in a state of relief and exhaustion.

My time at Elk Point was broken by a year spent in Siberia and a year at Camrose Normal School. Returning to the familiar area, I taught at Richland School, west of Elk Point. Here I stayed for a few weeks in a bunk house owned by Oran Caskey. Later I acquired a much-used car to drive from Elk Point each day. Two of my pupils, Ila Markstad and Pearl Lorentzen, rode with me. One day, as we climbed a steep hill in the trail, I felt no longer able to control the car. I called to Ila and Pearl to jump but they were too frightened and we continued to race backwards to the bridge below. Fortunately I could keep it on the road, but the rear axle was definitely broken.

At Elk Point, a young chap from Edmonton by the name of Byron (Barnie) Kingsbury came out to teach. We organized a couple of concerts. Mainly, all we did ourselves was go on stage, tell jokes and sing songs we had written ourselves. Some of our jokes were a bit flat and some of our songs not too well composed nor sung. But the people seemed to be in good spirits and applauded our attempts with enthusiasm.

At Yankee School I boarded with the Browns. Being enthusiastic at that time about tennis, I was assisted by several farmers to get a strip of pasture cleared, plowed and packed, and with the necessary equipment from Eatons, we were in business, except on days when rain filled the court.

I also recall being at Elk Point in July of the following year after my first arrival and was surprised to see no evidence of a holiday. But, on July 4, baseball was being played in an adjoining field, and games and dances followed, all with a generous display of Stars and Stripes. This was understandable as most of the people living in the area had come as homesteaders from the north central states. Nobody seemed to care about countries as long as they were having a good time.

I worked for the Edmonton Public School Board from 1927 until my retirement in 1963. After these thirty-six years, where I taught in the classroom, was principal of two schools, and supervisor of Art for city schools, I took a post-retirement job with the University of Alberta's Faculty of Education in the Art Education Department and have been there thirteen years.

I was honored by the city of Edmonton by being the first artist in the city to receive the 'City of Edmonton award for Visual Arts,' in 1970. I was president of the Edmonton Gallery 1955-57. I received an honorary membership in The Alberta Society of Artists and the Canadian Society of Education, as well as The Alberta Teachers' Association.

Elk Point was a good community to go to as an eastern greenhorn. It is a much changed community to go back to. I do this as often as I can. I was greatly honored a few years ago to be the special guest speaker for their Spring Festival Day. It was an honor for which I am ever grateful. 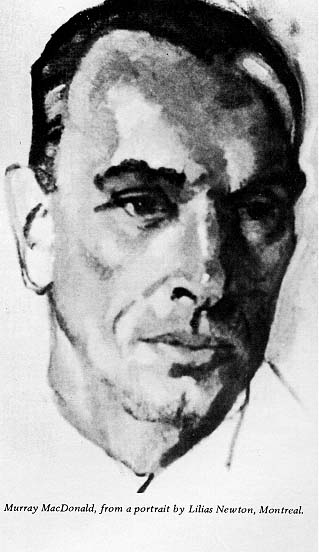 Murray MacDonald, from a portrait by Lilias Newton, Montreal.