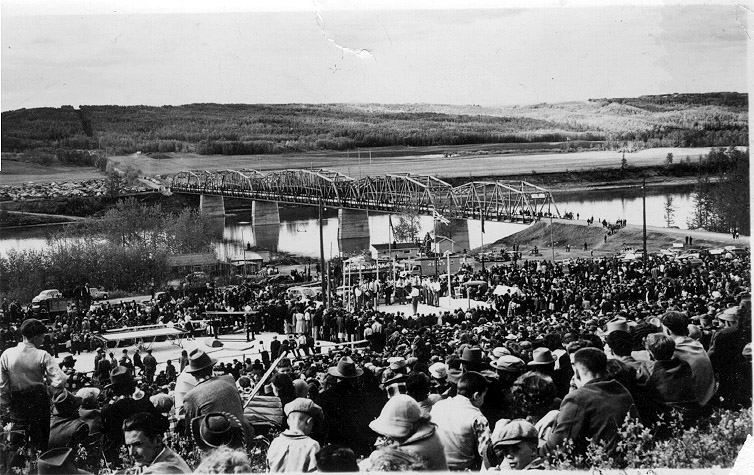 On June 7, 1950 a mammoth bridge opening celebration was  held at the Elk Point bridge site. An estimated crowd of over 12,000 people was in attendance. This mass gathering far exceeded all other celebrations ever held in the Elk Point district.

Prior to this bridge opening in 1950, the people of Elk Point and surrounding districts used a ferry to cross the North SaskatÂ­chewan River. The first ferry was installed at this site in 1914 and it remained in service for the folÂ­lowing 36 years. Although this ferry served its purpose, there were periods of disruptions durÂ­ing the early winter and early spring, a time when no vehicles could cross the river because of unsafe river ice conditions. AlthÂ­ough an overhead cage was put into operation, hauling passenÂ­gers across the river during the winter freeze up and spring break up, many of our south of the river residents found this method inconvenient and so they shifted their business to DerÂ­went, Clandonald and Vermilion. This resulted in a major business loss to the many merchants of Elk Point.

In early 1949 the Elk Point Chamber of Commerce began pressing for a bridge and someÂ­how they convinced the Alberta Government that one was badly needed at this site, mainly  because of a sizeable increase in traffic.

Construction of the Elk Point bridge was started during the fall of 1949. Soon after the winter freeze up, work was started on the cement piers, they had to be completed before the spring break up. Due to an extremely cold winter (one of the coldest during recent times) many hardÂ­ships and problems were encounÂ­tered by the work crews, however by working hard and putting in long hours the workers were able to complete these ceÂ­ment piers on schedule. Next came the steel construction as well as the construction of the spans. The bridge was finally completed in May of 1950, and was soon put into operation.

After waiting for 36 years to get a bridge, it was decided a mammoth celebration was in order and soon after, the town of Elk Point as well as the Elk Point Chamber of Commerce spent many long hours planning one. Headed by Elk Point's mayor, Harry Ramsbottom and Chamber of Commerce secretary, Joseph V. Jacobson and his committee, the date of the bridge opening was set for Wednesday, June 7, 1950.

The day of the bridge opening finally arrived, a beautiful, cloudÂ­less day, ideal for a mass celebraÂ­tion. The crowd started arriving early and in no time thousands of people from near and far gathÂ­ered for the much looked forward to event, a celebration which will long be remembered by those in attendance. The area to the south of the bridge was used for parkÂ­ing vehicles and the area to the north was reserved for those taking part in the mass bridge opening celebration.

After numerous speeches by the main dignitaries. which inÂ­cluded the mayors from many surrounding towns and villages, representatives of the different Chambers of Commerce as well as government officials, the ribbon was finally cut by the Minister of Public Works, Hon. M. McMillan and the bridge was officially declared open to the public.

A mile long parade preceded the official opening.  Musical bands from Vermilion, St. Paul as well as the Clandonald Scottish Pipe band performed throughout the day. Other forms of enterÂ­tainment included: an aerobatic display by the Royal Canadian Air Force from Cold Lake, a grandstand show, four profesÂ­sional boxing matches, kiddies free rides, the Saddle Lake InÂ­dian performers, a free barbecue, a giant fireworks display at night as well as dances in both the King George and Elk Point Halls. DurÂ­ing the day, the bridge opening ceremonies were broadcast by Edmonton's CFRN Radio station.

People came from far and near to help us celebrate this mass celebration. It was an event of great importance to our communÂ­ity. It meant that no longer would there be delays in crossing the river. It also meant that our local merchants would no longer have a drop off in business during the early winter and spring because of river disruptions such as they experienced during the previous 36 years.

This bridge remained in operaÂ­tion until 1986 and was then replaced with a no span bridge, one that would allow loads of any heights to use this new structure. The official bridge opening of this second bridge took place on June 8, 1986. As it was considered a replacement bridge the bridge opening didn't compare in scope to our original first bridge openÂ­ing on June 7, 1950, which attracÂ­ted a mammoth gathering of well over 12,000 people.