You may wonder how a general store, which has been open for eight years but has never made a sale, can remain open. Such a store exists in Elk Point. It is the antique general store which makes up part of the Pioneer Museum display. Housed in a special building, it contains thousands of items from the past - many as old as 100 years or more. There is an 1861 wooden washing machine, a cast-decorated cash register, a large 1920 hand-turned coffee grinder, an old wooden ice box, a 1920 battery radio, a 1910 Edison cylinder phonograph, an oldfashioned scale, a 1929 slot machine, many different butter churns, lamps, early fruit jars, as well as countless other items. 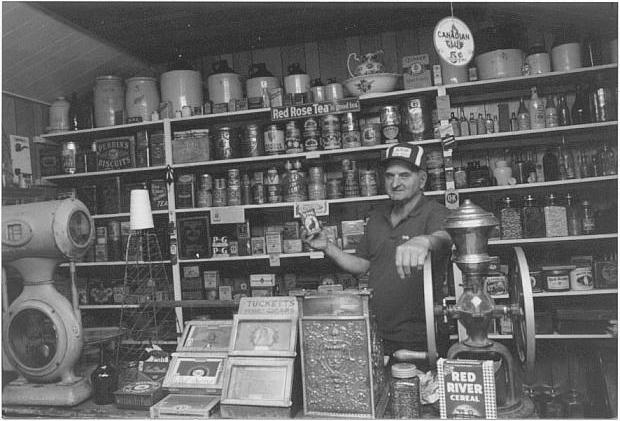 On shelving, there are hundreds of old tins: tobacco, coffee, tea, jam and peanut butter, etc. as well as many early medicine bottles, porcelain jugs, old catalogues, early 1900's calendars, early tools and ladies' fashion needs. Outside, located nearby are two 1918 gasoline pumps used in the days when you could buy gasoline at 25 cents a gallon.

This store was built in memory of William Andrishak, who was a pioneer storekeeper during the middle 1920's in Elk Point. If you want to step back in time, visit this interesting general store - no doubt you will be fascinated.

Steve Andrishak's store is somewhat of a time machine. For us of middle age, stepping in the door is stepping back into the days of our childhood, when general stores were a common sight in small town Alberta. The cans of Old Chum tobacco and Players cigarettes, the wallhung container of Chanticleer cigarette pares, the paper-wrapped cakes of P and G Fels Naptha or Sunlight laundry soap, the green boxes of Creamettes macaroni, all were on the shelves of those stores of long ago.

We remember when storekeepers weighed out a pound of sausages and a half pound of bologna on scales just like that, and the rich, tantalizing smell of fresh-ground coffee.

Square shaker-topped boxes of Bon Ami scouring powder bring recollections of cleaning windows with that awful stuff that got powder all over over everything in sight, and the box of Rickett's Bluing reminds us of washday, when all the white clothes got a final rinse in a galvanized tub of blue-tinted water. The tins of Empress and Climax jams. The brown tin of Magic Baking powder, the big red tin of Blue Ribbon tea put us right back in Mother's pantry.

You can't go back home, they say, and in most cases this is so. Mother's pantry and her gas washing machine are long gone, and the general stores have been replaced with efficient, impersonal supermarkets. But you can get that warm, home-town feeling, just by stepping in the door of Andrishak's General Store .... and even better, this is one shopping trip you can afford.