Mr. and Mrs. Darroch came to live on property David inherited in the Spring Park district in the early 1930's. Of Scottish ancestry, David had been in the Royal Navy for many years prior to coming to Canada. Nellie, to quote her English friends, had been "gently reared" in England.

Absolutely nothing in the background of either of them helped equip them for farm life in the remote area to which they came. They had stayed briefly in Calgary where their only daughter, Winnie, got a job and later married, but that was the extent of their 'western' experience. Their farm was at the north end of what we called Moose Hills Lake, or Keller's Lake.

In good weather, if they did not have to buy flour or coal oil, they walked to Elk Point, about twelve miles round trip. They had a team and wagon, but this trip they considered "a pleasant little walk", and, to our delight, they often took a short cut home through our place and stopped in for tea.

One day Mr. Darroch arrived alone, a most unusual situation. When Mother inquired about this, he gravely replied, "Nellie isn't feeling too well, but she fancied having the mail, so I went for it. Yesterday she was helping me fence and I struck her on the head with the post maul." This devastating piece of news upset Mother and she sent Kathleen and me on horseback to see if Mrs. Darroch was in fact "all right." She was, if you didn't count two lumps like half a tea cup on her head!

It never occurred to Mrs. Darroch that, just because she lived in the backwoods, had no utilities, not much money, and only a very plain home, that that was any reason to change her lifestyle. She worked hard outdoors, but was always carefully groomed when she went out or had guests. Her tea table was a delight, always set with fine china on a pretty cloth. She was an excellent cook, who always seemed to have dainty goodies ready as if she'd known someone was coming. She had no fridge nor freezer till she moved into Elk Point.

Mr. Darroch's health failed and they moved to Elk Point. After his death, Mrs. Darroch kept busy gardening and doing beautiful fancy work. She worked for years in the Elk Point Public Library.

When I visited her in the Elk Point Hospital in March, 1969, her posture was still erect, her hair neatly coiled, her conversation still sparkling. 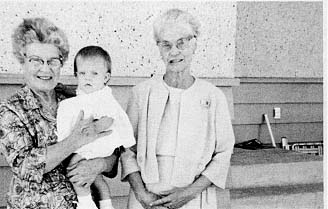