I was born at Camrose, Alberta in 1928 and moved to the Elk Point area with my parents in 1933.1 attended school at Capital and Richland until I finished grade nine in 1944.

When we were still attending school, on occasional weekends we had house parties, skiing, skating and the odd wiener roast. The type of party would depend on the season of the year. In our area it seemed that Andy and Amy used to get stuck with a lot of these parties because they had both a pond to skate on and a hill to ski on. They were always very good to us and kept the parties alive and were also good chaperons (no monkey business). I think they did more for the kids in our area than anyone else.

When we were kids we rarely saw town and seldom had candy. Dad always bought me a box of 22 shells. The motto was, one shell-one bird. It helped us to eat well and I became a good shot as well. I remember being proud that I could contribute to the support of the family. One time when I was about nine years of age my Mom sent me to town on my saddle horse as she needed sugar, pectin, jar rings and lids to can berries that were ripe. After I had purchased these things at Markstads store I went out and tied them on the saddle. Mr. Markstad called me back in and gave me a bag of candy. Boy, he sure knew how to make friends.

When Dad retired and sold the farm to my brother George in 1944, I went with them and we rented a house near the creamery. In 1945 we built a house on two lots Dad bought from Bill Milholland. It was at this time that I learned I liked construction. Dad, Clarence and I worked for the St. Paul School Div. for a time building teacherages and schools. In 1947 I went to work for C. H. Whitham Ltd. when they started building the Salt Company at Lindbergh. Jim Rylance and I were the first ones hired from our area. I did well that year and in seven months earned $856.55 before deductions. My tax exemption was $750.00 and my income tax was $17.0C for the year. The hourly rate was 70 cents.

In 1944 I learned to drive a 1929 Plymouth that Dad had and drove quite a lot. It was in 1946 that I met my wife to be, Gunhild Bjorneskaret. I had seen her at parties and dances but she was a very shy girl. We started going to dances at Armistice, Stony Lake, Elk Point and Spring Park and to shows in the hall in Elk Point. We were married in 1949 and we have three children. Sheila born in 1953, Vickie in 1958 and Arne in 1963. 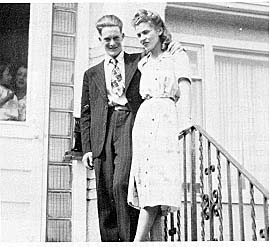 Edwin and Gunhild Nelson honeymooning at the Valentine house in Edmonton, 1949.

My wife, Gunhild, was born in Birch Hills, Saskatchewan. Her family moved to the Lake Eliza district in 1934, and Stony Lake to homestead in 1936. She attended Swedeboro school until 1945. After this she went to Elk Point and worked for Max and Olga Fisher for $30.00 a month. She went home on weekends with her Dad, Arne, when he was doing carpenter work in town.

After we were married we lived in Elk Point for a while and then we moved to a house at Rolf Andersons and we both worked for Canadian Salt. Gunhild received 60 cents an hour packaging and my wages were 75 cents an hour. From there we moved back to Elk Point where we lived until we bought the Edwards place, S.E.34-56-8-W4 at Stony Lake in 1955. This was also the Stony Lake Post Office.

The winter of 55-56 was a bad one for us. The storms started early in the fall and I broke two transmissions, one rear end and two sets of chains on my car going to St. Paul for groceries. The roads were completely blocked to Elk Point except for horses and it was not easy for them. I rode a saddle horse into Elk Point to get our mail and what groceries I could carry. The county had spent all their money for snow plowing by Christmas that year and after that only the main district roads were kept open. Our money too soon disappeared and all the food we had left were potatoes and some canned berries. I went hunting and shot a deer, (old and tough) and also fished. Things worked out well. Things improved after that winter and have progressed favourably since. My wife has been sewing clothes for herself and our children since we have been married, and occasionally sewed for neighbors. This was a great help as ready made clothes are terribly expensive. Also like most women she is a consistently thrifty shopper, enabling us to make it this far. We are fortunate in that we live in a good area and my trade has let us see a lot of country, nearly everything west of the Ontario border.

I started to learn the carpenter trade from my Dad and then from my father-in-law, Arne Bjornskaret and Bill Lundquist. I still think they are among the best carpenters this country will ever know. Bill was the kind of man that could stand at a pair of saw horses and cut up all the material for a house, hip rafters and all and they would fit! A neighbor of ours had taken enough logs and sawed up enough lumber for rafters, roof sheathing, floor etc. to build a house. He got Bill to do the work for photos Bill started cutting the logs and laying them on the ground just so. After four days of this our neighbor got a bit excited. His log pile was going down and all cut up in various lengths. He told Bill if they did not fit he, Bill, would have to go and bring in more logs to replace them. Later he was asked how Bill made out and his reply was, "Every damn one of them fit!"

After I worked for Arne and Bill for several years I started working for companies such as Poole Const., Bird Const., C. H. Whitham, Golden Const., Federated Co-op and others. There is no way of knowing how many buildings I have worked on but I became a foreman with Federated Co-op in 1964 and have worked in that capacity since. At home I started with Fraser and sons in 1968 and built the Elk Point Co-op store (soon to be vacated). In St. Paul I was foreman while constructing the Polaris Arena, an apartment block, The Golden Dragon, Bank of Commerce, Indian Affairs, Sunlite Electric and some commercial renovations. In the town of Elk Point I was foreman on the R.C.M.P. barracks, A. G. Ross Agriplex, and at the time of writing we are completing the new Elk Point Co-op store. 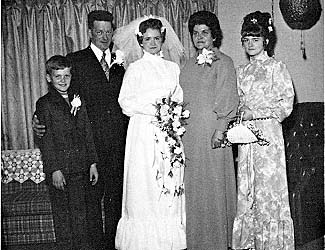 Nelson Family, on the occasion of Sheila's wedding

In closing I will bring you up to date on our family. Our daughter Sheila is married to Don Gerhardt and lives in Edmonton with their two children, Vernon and Patrick. Vickie is married to Victor Stepa and they make their home in Elk Point. Our son Arne is still attending the F. G. Miller High School