Hazel, now living in Richmond, B.C., was teaching out of Edmonton when we moved to Elk Point. She followed the next year and taught at Richland and Orvilton schools. In 1938 she married Charles Ledingham, who died in 1940 in Holden, following a fire. In 1946 she married Art Bolcam.They have one son and one daughter.

Helen, now living in Vancouver, B.C., was teaching in Fort Vermilion when we moved to Elk Point. She followed the next year and taught at Paramount and Spring Park. In 1937 she and Dewey Caskey were married in the Elk Point Church, with Rev. S. Marshall officiating. They moved to Edmonton in 1941, then to Vancouver in 1944, where Dewey retired in 1975. They have one daughter and one son.

Margaret, now living in Edmonton, finished high school and business college, then worked in Edmonton. She spent only brief holidays in Elk Point. In 1940 she married El Souch, who retired from teaching in 1976. They have one daughter. 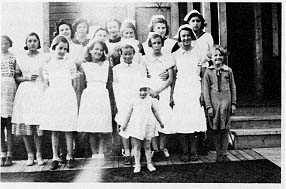 I, Myrtle, moved to Elk Point in 1933, where I finished Grade XI. I have fond memories of C.G.I.T., Sunday School, school, baseball, skating, dances, "boy friends", and those good old Sports Days. I moved to Edmonton for Grade XII and trained for a nurse at the Royal Alex Hospital. In 1942 I married Frank Christie in Nanaimo. Following his two and a half years overseas, we moved to Lethbridge, where we still reside. We have two sons and one daughter. 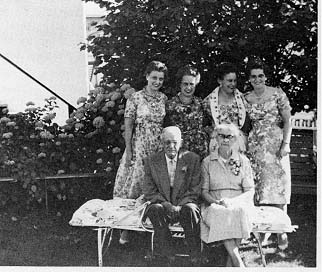 Mr. and Mrs. O.K. Nelson front on the occasion of their 50th wedding anniversary, 1960.

At the bock are their daughters Helen, Hazel, Margaret, Myrtle.