In reading through the diary of my late husband, Jens Aarbo, many fond memories have been recalled since our marriage December20, 1935. I understand he was the second white child born in this vicinity, in the year 1908. Harvey Fish was the first. Jens and Harvey were very close friends. Many outdoor sports were enjoyed together. Jens named one son after Harvey.

When I first arrived in the Elk Point area in October of 1931, my Uncle Norman told me he had chosen a husband for me. He said he was a good farmer and had grown a carload of wheat, which sold at 22 cents per bushel. He not only was a good husband, but a good provider, and managed his own affairs. We came to our farm with eight head of horses and twenty brood sows, but very little machinery.

My family came into the Elk Point area from Youngstown, Alberta, which had suffered many years of drought. The depression years following added many discouraging moments. We were a family of twelve children, and every act of kindness shown us on our arrival was greatly appreciated. The government made possible transportation to this community if we could acquire a place to live. My uncles, coming up three months previous, were able to find a suitable home for us.

Since our marriage in 1935, we became proud parents of six children, five of them in the community today with famIlies of their own. Victor and Harvey were farming with their father until his death in 1974. They have kept on with the heritage of their grandfather and their father. Harvey owns and farms the homestead his grandfather settled on in 1906.

Our first years of fanning had their ups and downs, with grain prices and cattle and hog markets as uncertain as they are today. We sold cream at $2.20 for a five-gallon can, eggs for 8~ per dozen. Jens hauled wood for $1.00 a load the first year we were married. Prom this we bought our groceries. There were no power saws to cut down the trees. Each tree was cut with an axe, the limbs tilinmed off and piled. On arrival of the first snow, Jens would haul the wood to town on a sleigh, often getting his horses stuck several times going in. He would unload half of the load and go on in, unload it, and return for the rest of the load, then make the same trip back to town. Hauling in two loads of wood was a good day's work. 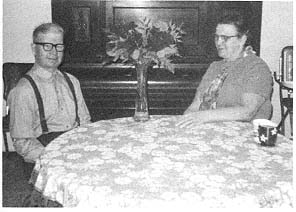 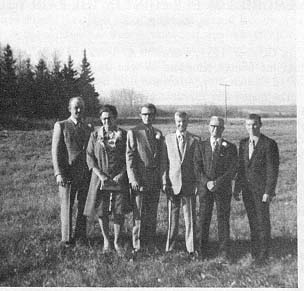 Our farm had only fifty-five acres of land broke on the two quarters. Jens broke many acres for Mel Haugland of Spring Park. In return, he was able to break land for himself using their equipment. He bought this quarter - N.E. 33-56-6-W4 - from Mrs. Hill, a very good friend of the Aarbos. I have her rolling pin and butter print, which I still use.

In 1948 we bought a small herd of Holstein heifers and later went into dairying as our main source of income. First, we sold cream; the skim milk was fed to calves and pigs. In the fall of 1962 we bottled one hundred quarts a day, delivering it from door to door in Elk Point, also to Lindbergh and the Salt Plant. In 1965, government regulations required all milk to be pasteurized. This compelled us to haul our milk to St. Paul for pasteurizing in eight~allon cans and bring it back in bottles. We also sold milk to the hospital. In 1972 we installed a stainless steel bulk tank and every other day a milk truck picked up the milk and delivered it to the cheese plant in St. Paul. We found this last method much easier and more profitable. We were milking thirty-eight cows at times, and keeping fifteen to twenty replacement heifers.

After Jens' death, I sold the older herd. We kept twelve younger cows and several heifers so we will continue in 1977 to sell milk to the cheese factory.

Today our sons are farming sixteen quarters of land, with several hundred head of beef cattle. They are on a program of up-grading their beef herd based on a Pinzgauer bull irnported from Austria.

Nearing the age of retirement, I feel the Elk Point community has much to offer my seventeen grandchildren. With three grandsons on the farm, the Aarbo homestead could carry the name for many years to come. It has now carried the name for seventy-one years