In the year 1889 Donald John Eugene McDonell was born in North Dakota, U.S.A. Later, with his family, he inmigrated to Canada, settling in Glengary County, Ontario. Their old home, Four Corners, still stands, a noted landmark near Lochiel, Ontario. He and his mother, an accomplished musician, played the organ and sang for church functions.

At the age of nineteen Eugene joined the Armed Forces and served overseas. After returning from the Army, he assisted Mike McMahon of St. Paul in an elevator. Several months later he was transferred to Elk Point, to become the first U.G.G. agent there. He retained this position until his retirement in 1959.

The Elk Point baseball team of the 30's will always remember Mac as lead-off batter and second baseman. Many curling skips vied for his services as lead, knowing he would never sweep a rock.

Mr. McDonell was very sincere in his religion, attending the Catholic church regularly. Furthermore, he insisted that anyone living in our house must attend his or her church. In those days the priests were hard pressed to make ends meet, but all of us worked for the welfare of others. (Mrs.) Pearl Hutter, a Jewess, and I, a Protestant, raised funds for Father Johnston. We held a tea at our home, doing all the baking and serving by ourselves. We raised enough money for Father to buy a suit, hat and shoes, which he needed so badly. Of course, all the neighbors patronized our tea. 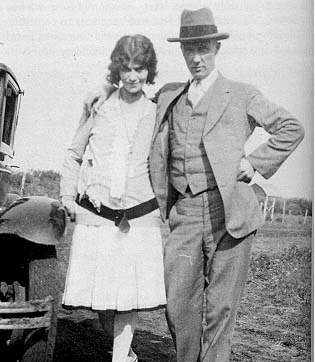 I, Florence Lewis, was born in Kettle Falls, Washington, U.S.A., and came to Alberta in 1905. Our nearest town was Stettler, seventy-five miles from our homestead south of Hardisty. We lived in a log house with a sod roof. The plants growing from the sod were always a source of amusement to us. My grandfather, father and uncle built our first school, where we attended four months of each year.

In 1928 I arrived by train in Elk Point to take up my duties as teacher of the Mooswa country school. My pupils and I watched as the rails were laid through Mooswa to complete the railroad from Elk Point to Heinsburg. For three years I taught at Mooswa and boarded with Art and Lil Bowtell. Their home was located near the spot where the Salt Plant Curling Rink now stands.

The first night I was in Mooswa I met Mac and Ed Caskey at a dance held in a small hall on the hill east of the Salt Plant.

On July 4th, 1930, we were married in Edmonton. When we returned to Elk Point by train, the entire population turned out to welcome us. I was presented with a huge showy bouquet of tiger lilies, the kind that covered the sand-hills west of Keitges. We were seated in an old pick-up, decorated for the occasion, and driven up the main street.

We had two daughters, Ann and Marie. Ann was always interested in sports and music. She played the clarinet in Mrs. Sumpton's band and was pianist for high school functions. After becoming a laboratory technician, she worked for five years at Canadian Chemicals. From there she went to work at the University Hospital.

In May, 1959, she married Wayne Napper of Edmonton, then a controller at the International Airport. Now he has been promoted to the position of Data Systems Supervisor for the Ministry of Transport. They have four children --John, Adine, Jamie and Patrick. Their home is in Edmonton.

Marie and her gang were noted for their raids on our cooky jars and refrigerators. One day, after returning home from shopping, I was surprised to learn that all my fresh buns were gone. Marie told me that the little Wolves really liked my buns. She meant, of course, the Wolfe children. Marie followed in my footsteps and became a teacher. First she taught in Lindbergh, then Heinsburg. There she met and married Ed Buck of Heinsburg. They have three children -- Eugene, Jeffrey and Cathy. Marie was president of the Figure Skating Club, and spent many hours working for the arena. Ed supports all sports. He sponsored the Elk Point Bucs for several years, and played a major part in building the new arena. His Construction and Paving Companies are known throughout north-eastern Alberta. Their home is in Elk Point.

In 1942 I returned to teaching. I taught at the Shamrock Valley school for three years. Sometimes I walked the six miles, while other days I rode horseback or friends took me in a lumber wagon. I was very happy when the Elk Point School Board hired me as teacher here. I was vice-principal of all the schools for several years, then head of the elementary school for sixteen years.

When teachers today grumble and complain of an enrollment of over twenty-five, I smile to myself. One year I taught fifty-four pupils, including twenty-five beginners. It is with great satisfaction that I state of those beginners twenty-two graduated from the Elk Point High School. Evelyn Soldan and Maynard Gautier would never forgive me if I failed to mention our Grade VI softball team. We even defeated the Grade IX teams, both boys and girls. During that period I was Brownie leader for over nine years, and president of the Curling Club for many seasons. I also enjoyed working for the Red Cross and was zone treasurer for over three years. 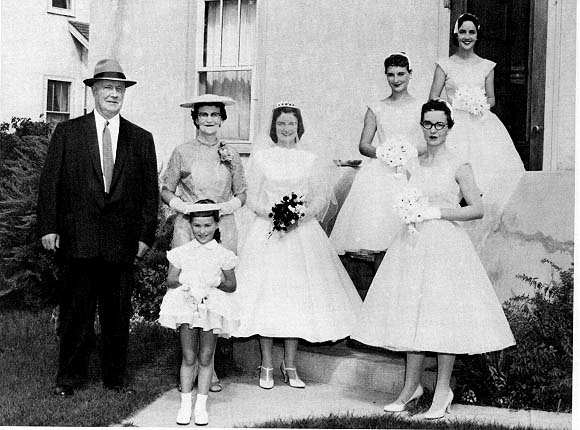 FRONT ROW, Judy Gares, on the occasion of Marie's marriage to Ed. Buck.

My home is now in the Kiwanis High-Rise in Edmonton, where I live alone in a very comfortable suite, busy with my quilt making, needle point, and bridge. I'm sure that, if my husband were with me, we would both agree that the happiest days of our lives were spent in Elk Point watching and helping our two beautiful daughters grow to become happy wives and mothers. 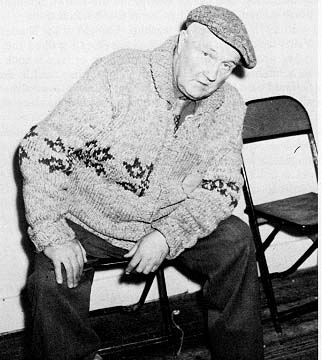