MEMORIES OF ELK POINT IN THE EARLY 5O'S

By Rev. Wellwood A. Adam

In October, 1951, Wellwood A. Adam and his wife arrived from the United Kingdom to take up pastoral work in the United Church. Rev. Adam was fully ordained later.

The manse and the church, now private dwellings, are still situated next to the Greek Orthodox Church and the recently built motel on the Elk Point - St. Paul highway. This highway had been gravelled for the first time shortly before the Adams arrived.

The United Church Camp, hidden in glorious "back-woods", opened at Whitney Lake in 1952. Many young girls and boys thoroughly enjoyed an annual summer vacation, living roughly in tents. Food was excellently cooked on wood stoves, and benches and tables were made on the spot when needed by the Rev. Charles Vogan, who was handy with the handsaw, hammer and nails. The one well was deep. Water was brought up by rope and bucket. Meat, butter, eggs, milk, cheese and fish were parcelled and let down into the cool well, which then served as refrigerator. These were then brought up as needed. There was no electricity in the Camp then.

There was no Elk Point R.C.M.P. detatchment. The R.C. M.P. drove out from St. Paul at certain times. Elk Point had only a small population; life was peaceful, disciplined;home and family life was strong and meant something then.

The Salt Mine, with management and employees, was functioning well. There were several storekeepers, two garages, two schools and staffs, the hospital with twenty-six beds, three great doctor-surgeons -- Dr. F. G. Miller, Dr. A.G. Ross and lady Dr. A. Wiegerinck. There were the United Church, the Roman Catholic Church and the Three Hills lady workers. So, with various retired people, Elk Point remained small and self-contained.

There was a bus to Edmonton and return, daily, driven by Ole Aasen. Rail service included a daily passenger train and freight train, which travelled to the end of the line at Heinsburg and returned next morning.

A new high school, with a "first" auditorium, was under construction. This is now the junior high school.

In 1952 construction added more beds to the hospital. Also spring of this year saw the banks of the highway south of the Elk Point bridge seriously collapse into the river, closing th ehigliway to traffic.

A small library operated just east of Zarowny's garage. It eventually provided a good supply of reading material, fiction and non-fiction, and religious, for adults and children. The late Sarah Vaughan was the librarian.

Indians came in from the near-by reservation, nine miles north of Elk Point, on horseback and in wagons in summer, and by sleigh in winter months, for stores and for trading.

Fire in 1953 almost destroyed the Co-operative Store. Firefighting equipment was a "fireart" based on the hospital grounds. It was not allowed to go to assist on fires outside town limits.

In 1954 installation of water and sewage equipment began. The lines were dug in well below frost line, twelve and thirteen feet. After freeze-up, heavy straw was placed over the selected ground; this was lighted and left to smoulder all night. The workmen were then able to dig out the softened dirt the next day.

The 50th anniversary of the Province of Alberta was celebrated in Elk Point at the sports grounds. There was a huge barbeque, also bands, and games and races for the children. The ladies of the Elk Point churches provided soft drinks and hot dogs cooked on the spot. All the water needed was brought in from the country in cream cans, as town wells had been condemned.

The schools held "talent" concerts annually. These were well attended from far and near.

The first TV sets were installed -- not very successfully. Pictures were "snowy" 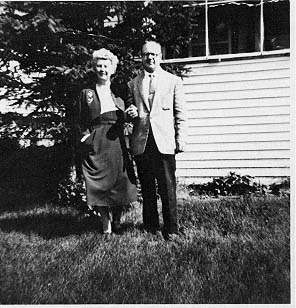