Hugh McQuillan was born in Glasgow, Scotland, October 21, 1905, of Irish parents. He immigrated to Canada with his parents at a very young age, settling at Lacombe, Alberta.

Hattie Markstad was born in North Dakota and came to Elk Point with her parents, Mr. and Mrs. C.J. Markstad, and her sisters, in 1908. She received her early education in Elk Point. Then, after the death of her mother, she attended school in North Dakota for one year. In 1918 her father built a house in Vermilion for four of his daughters -- Alta, Esther, Hattie and Ila -- to attend school.

At the time Hattie finished high school, many country schools were being staffed by high school graduates teaching on a permit. Hattie first taught at Bentley Lake on a teaching permit in the summer of 1922 after she came out of Grade XI. The school was a deserted log house. She boarded with a local family and, while riding horseback to and from school, was always on the lookout for bears. 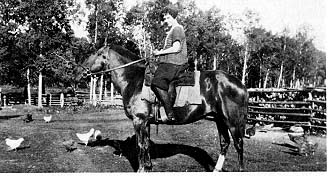 Hattie Markstad at Bentley Lake where she taught school 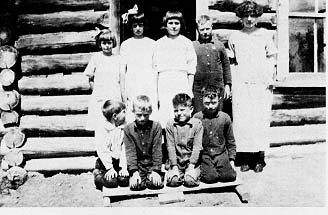 In August, 1923, Hattie and her close friend, Hilda Jenkins (Hodgkinson), decided to attend Normal School in Camrose. They found a basement room in the house of the mayor, George Lowry. They cooked on top of the laundry stove situated in the furnace room, did their laundry on a washboard, and were very satisfied with their living arrangement.

After completing her year at Normal School, Hattie again taught at Bentley Lake, Whitney Lake and Richland. While teaching at the latter, her young sister, Ida, went with her.

With the building of the railroad Hugh McQuillan arrived in Elk Point, where he met and married Hattie Markstad. They moved to Camrose, where Hugh worked for W.D. Belzol Real Estate, and where their son, Bob, was born in 1927. Returning to Elk Point, Hugh managed the store for his father-in-law, C.J. Markstad, and helped him also with the Imperial Oil Agency. In December, 1928, their daughter, Evelyn, was the second baby born in the new hospital.

Hattie and Hugh were involved in the Drama Club under the direction of Mr. and Mrs. E.A. Bullis. Hugh played on the local hockey team. They both enjoyed tennis in the summer. When a curling rink was built, they both participated in this sport.

Hugh served as the first secretary-treasurer of the village of Elk Point and also as secretary of the Chamber of Commerce before it was formally incorporated.

Hattie was active in the Women's Institute, Ladies' Aid, and sang in the choir of the United Church. She returned to teaching, obtaining her Bachelor of Education at the University of Alberta by attending summer sessions.

Great excitement was driving to Edmonton in Grandfather's truck with my Dad (Hugh) to pick up bulk oil for the Imperial Oil Agency. It was an all-day trip one way.

There were camping trips to Lake Whitney, where we camped in a tent and cooked on an open fire. We later ventured to Muriel Lake to camp 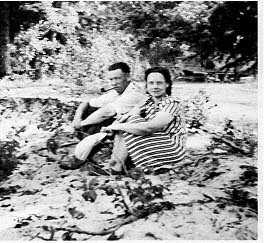 Summer Sundays would see several families (Sumptons, McDonells and McQuillans) packing a picnic lunch and going to Whitney Lake for the day.

A visit to our Aunt Ila and Uncle Max Borowsky at Angle Lake was a regular happening during the summer. We would cross the river on the ferry and, on arriving, would enjoy a delicious dinner of fried chicken and home-made maple walnut ice cream. Invariably it would rain on the way home and the Horseshoe Hill at King George would usually prove a great menace. Often we got stuck and had to be pulled out with a team of horses. With the coming of winter these trips would come to an end. Even when the river was frozen enough to drive across, the roads were impassable. Spring break-up meant crossing the river in the "cage", which meant not having a car on the other side.

Living across from the skating rink, Bob and Evelyn started skating at an early age. They would be ready and waiting each night for the skating rinks lights to be turned on. 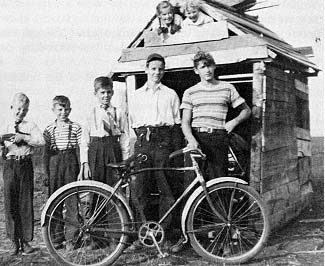 Fun in the McQuillan back yard. Supervising at top, Jean Ross and Carol Caskey. 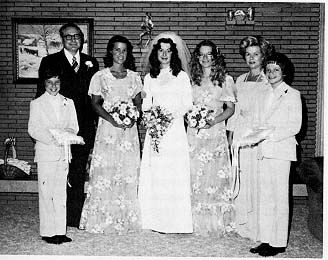 The Mickey Awid family on the occasion of Patty 's wedding, 1976.

Bob was very musical and took piano lessons from Mrs. Howe. With a piano accordian given him by his grandfather, he, Lloyd Bartling, Clarence Boos, Bob Quin, Alan Pringle, etc., formed an orchestra and were quite in demand for dances around the county.

Jean Ross and Evelyn would bicycle out to Dr. Miller's farm to ride horses. Being very inexperienced but having no fear, they would saddle up the "wild broncos" and away they went. On one occasion the horse Evelyn was riding decided to race very close to the barbed wire fence and to this day Evelyn bears the scars of this outing.

One project of Bob, Jamie Ross, Dean Caskey and Richard Miller was building a "club house" in our back yard. It was certainly an eye sore, but provided many hours of fun.

Bob and his wife, June, live in Vancouver and have two sons and twin daughters. Bob followed his first love and is a music teacher, owns two music studios and still plays in an orchestra occasionally.

After graduating from high school, Evelyn attended business college and then worked as a secretary. She and her husband, Mickey Awid, live in Edmonton and have three daughters and two sons.