REV. JOHN B. LORENTZEN AND FAMILY

John B. Lorentzen was born in Norway and emigrated to Seattle, Washington as a young man. He attended Bethany College in Everett, Washington (this college has long been closed and is now Bethany Home for the aged). From here he went on to Augsburg Theological Seminary in Minneapolis and from there was ordained a Pastor in the Lutheran Church. His first pastorate was at Bonetrail, North Dakota where he organized two congregations, and churches were built there.

He met and married Veva Wierson in Carpio, North Dakota. In the fall of 1918 they moved to the mission field of Elk Point. He organized three congregations in the pastorate -Lea Park, Flat Lake, and Glendon. The Flat Lake church was a log building now used as a chapel. The building and cemetery are designated an historical site and a government grant was received to preserve them. He was instrumental in the erection of churches at Lea Park and Glendon. The Glendon church is now used by the United Church. 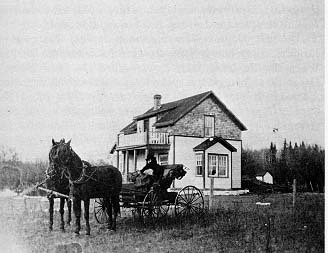 Rev. Lorentzen in front of his home, ready to visit one of his charges with faithful Prince and Polly.

Rev. and Mrs. Lorentzen worked very diligently in the wide mission field, driving many miles with horses and buggy in summer, and cutter in winter. He travelled from Elk Point to Vermilion, Minburn, Vilna, Flat Lake, Glendon, and Lea Park. Later he drove a Model A Ford car in summer, sometimes arriving late for his sermon, mud-spattered, after being stuck in a mud hole or on a slippery hill; but they loved their work, the people, and the beautiful country. They often visited the sick and brought food and clothing to the needy.

Truly Mr. Lorentzen and his wife were great pioneer missionaries and contributed much to the mission work. 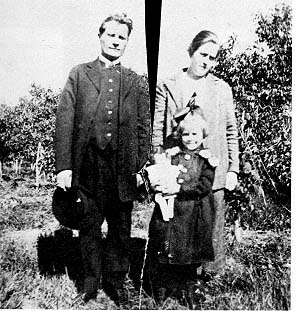 Rev. and Mrs. John B Lorentzen and Pearl.