James Love Millar and his wife Elizabeth (Lizzie) from the day of their marriage in 1911 resided in the small mining town of Kinglassie, Scotland where Jim had grown up. He distinguished himself in track and field sports and ran professionally in England and France. It was through his running activities that he had met Elizabeth - the daughter of a well known Dunfirmline building family. Jim operated several businesses in the town of Kinglassie having purchased the small family grocery and butcher business from his father. He later acquired and operated the Braefoot Bar, an establishment which is still in existence today. Jim, during World War I, served the government in a management capacity and was invalided home after a serious bout of pneumonia. This illness, coupled with an imperfect heart attributed to his running activities, left him with a condition which his doctors felt would be improved by a move to a higher and drier climate - Canada was the country of his choice.

Jim, Lizzie and their two sons - Frank and James - arrived in Canada aboard the steamer Metagama on the 16th day of June, 1922. They went directly to Calgary, Alberta. In July, Jim - who had left his family in Calgary - was searching for land in the Lacombe district where he met one of the "Bank Boys" who convinced him that a new district, allegedly flowing with milk and honey, was the right place for an eager Scot, who knew absolutely nothing about farming, to start a new career. Jim travelled with his new-found friend to Elk Point via Vermilion, and then north by car driven by Romanzo Fish. He was immediately taken to the Charles Markstad homestead - two miles east of the village. A sale transaction was completed within a matter of hours.

Jim, who knew somewhat less than nothing of the ways of the new land, engaged a local carpenter, Helge Hesselgren, to start effecting some renovations and improvements to the interior of the big square log house. He left Helge a few hundred dollars to carry out the work while he returned to Calgary to collect his wife, family and their belongings.

The family trip to Elk Point was made via Edmonton and St. Paul. There was a short delay in Edmonton as the work on the laying of the railway track was still underway. Final ballasting and levelling of the track had not been done and the trip from Edmonton to St. Paul was a rough one lasting from 6 a.m. to 9 p.m. The arrival of the train in St. Paul was an event, and half the town, seemingly, turned out to look over all new arrivals. The following morning the family were met by Charlie Hood who, with his Grey Dort, was engaged to drive them to their new home. The trip to Elk Point was an event. Jim in a grey flannel suit twice had to carry his wife and family over mud holes. At one point, they became stuck in the Dog Rump Creek but Charlie was equipped with shovel and tackle. The car was extracted and the trip completed. On arrival at Elk Point, the Millars had their first meal with the Hoods and a close friendship was started with the Hoods that lasted as long as the two couples lived.

Upon arrival at the "farm", it was learned that Helge had disappeared the day after Jim, presumably to order building materials. He had visited Vermilion and had gone on to Vegreville for a short (two months) 'celebration'. He eventually returned - sans money, sans materials - and worked for Jim for the following winter to partly pay back the funds.

Mrs. Millar (Lizzie) was a quiet, gentle person who was educated in Scotland and in Wales. She was totally unprepared for the circumstances in which she found herself. Their home in Scotland had been somewhat above average in fittings and furnishings and leaving it was, for her, a traumatic experience. Lizzie could not bring her furniture and her beloved piano but she did bring her fine china, sterling flatware and a plentiful supply of fine linens which were woven in her hometown of Dunfirmline. She could only bring those articles which could be packed in boxes. Her belongings did not serve any practical purpose for a woman forced to learn quickly to make butter, bread, can fruit and meat, etc. However, with the help and assistance of fine and able neighbours, the many tribulations and crises of the early years were overcome and a way of life developed which, by her standards, although crude and harsh, was acceptable in the circumstances.

Lizzie made the most of what she found available and always strove to make things better than they were. She was a gentle person who saw good in all people and brought to her home and indeed to the community a measure of grace and refinement which was recognized and appreciated by all who knew her. Mrs. Millar, so far as can be recalled never once said anything detrimental or derogatory about any living person. 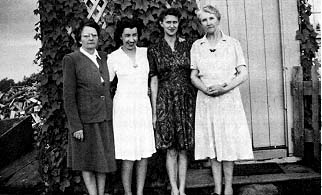 Jim Millar, however, was something different. He went at everything with zest and purpose, not necessarily with good sense, or reasoned judgment. Before arriving at Elk Point, the sum total of his knowledge of farming was that acquired by occasional visits to the Edinburgh Agriculture Exhibition and two summer holidays spent on the farm of an uncle. His farming endeavours were pitiful, uneconomic and frustrating. He did, however, have ideas and dreams and made a considerable indirect contribution to the community development and its social life. He was one of the first to acquire and use a tractor for field work, buying an early Fordson through Charlie Markstad. It was used chiefly for land breaking and plowing, a job for which the little tractor was too light and incurred some terrible repair bills. Jim Millar introduced the first bacon-type hogs to Elk Point. People came from far and near to see Jim's long-nosed Tamworth pigs. Similarily, he introduced Guernsey cattle. He held the second registered Guernsey Breeders' number in Alberta, and the name "Stratheden" (a name he had given the farm) is still in evidence in the Canadian Guernsey Breeders records.

Jim was an inveterate church goer. To his mind, Sunday was not Sunday unless the family went to church. He, along with Mrs. Hood and Dr. Miller were instrumental in starting the first United Church, this shortly after the United Church of Canada had been formed. Jim served on the Church Board through the church and manse building periods, and was a keen choir member and supporter for the balance of his days in Elk Point.

In the 20s and 30s money was scarce and people ingeniously organized entertainment and competitions of all sorts. Jim who had in his younger days engaged in both Highland and Scottish folk dancing, decided to introduce this activity to the community. In his home and later in the Arnott Hall, with Mrs. Bill Chester at the piano, classes were held introducing the Highland Schottische, Reels, Strathspeys, etc. Gradually the numbers at the classes dwindled to a few true devotees and the dance forms were altered to folk dance patterns to facilitate entry in the folk dance competitions at the St. Paul Music Festival. For three years, the Elk Point team of dancers were successful with folk adaptations of the Highland Fling, the Sailor's Hornpipe and the Irish Jig. The dance team was composed of Ann Miller, Edith Markstad, Sidney Holthe and James Millar Junior.

The early years in the settlement produced some unlikely but interesting social and work relationships. One was that of four men who formed what could best be described as a loose work partnership. Jim Millar, Percy Whitworth, Joe Quin and Martin Loftus. Percy and Joe were World War I buddies and brothers-in law who had cast their lot in their farming careers. It would be difficult to find four men with such varied origins and backgrounds who for years enjoyed working together. Martin was by far the most experienced and practical. It was he who supervised their operations; the breaking of colts, butchering of steers and pigs, repairing roofs, etc. The other three contributed their skills as they could. They did all their work together in combinations of two, three or four. Each year, they bought one Irish Sweepstake Ticket. This expenditure of $1.00 each established a topic and basis for hours of study, conjecture and wishful thinking on just how they would spend the anticipated wealth when received. The plans and schemes for the spending of the money were wild and hilarious. Unfortunately Dame Fortune never smiled.

This same group, while spending much of their work time in each others' company also saw a lot of each other socially. Throughout the winters they had in addition to the day to day visiting, many real bang-up gatherings sometimes with other neighbours in the form of surprise parties which were generally well planned food orgies where each of the wives, by pre-arrangement, brought two or three different specialty dishes. These parties were real family affairs; card playing, with whist seemingly the most universal game, but oh, the parlour games they devised in order to "get in" all the older ones and the young. These games were played with more gusto than skill, led generally by Percy who was a born comic in the best London Cockney style.

Reading was a constant valuable past time particularly during the winter. The Millars had a fair supply of varied books which were read and re-read. However, the most prized reading were the periodicals. The subscriptions to them were supplied as a Christmas gift each year from an uncle in New York. For years every month into the home came The Woman's Home Companion, The American Magazine, The Farm and Fireside. In addition by local subscription they received The Grain Growers' Guide and The Free Press Prairie Farmer. This constant supply of material generated a great deal of family discussion and contributed immeasurably to the improvement of the every day life of the family.

For many years, Jim Millar supplied milk to the hospital and to part of the town. For years, he did not miss a daily delivery and his brown team and rubber-tired rig was a common site on the Elk Point street. Children made a regular habit of hitching a ride and many will remember these rides behind the world's slowest moving living horses.

Jim and his wife, together with James and Betty, sold out and moved to the Ottawa area in 1948. Lizzie died in 1955 - Jim in 1956. They are buried in the Springhill Cemetery a few miles south of Ottawa.

To be able to fill leisure intelligently is the last product of civilization.