Karl Gustav Hellquist grew up in Smedjebacken, Sweden. He and his brothers followed their father's footsteps and entered the steel industry in the area. He married Anna Anderson from Svearna, a lovely farm near the little village of Vibberbo. Although his brothers remained at Smedjebacken, Karl had wandering feet and he and Anna, with their three sons, Gustav, Carl and Ernest, moved around for several years before settling down at Iggesund. This was a busy town on the Baltic Coast of Sweden, where Karl was foreman in the steel rolling mill.

The fact that Karl was fifty years old did not stop his and his family's decision in 1929 to emigrate. After considering both Australia and Canada, they chose Canada. They said tearful goodbyes and boarded a ship bound for Canada, with the idea they would return in a few years. Through correspondence with a minister, arrangements had been made for someone to meet them in Winnipeg. Upon arrival there, they were told to journey on to Elk Point, where someone would be at the train station to meet them and provide a place for them to stay until they were settled in a place of their own.

Upon arrival in Elk Point they discovered there was no one to meet them at the train. They could not speak a word of English. Mr. Markstad, who could speak Norwegian, was summoned and a place found for them to spend the night.

The Hellquists stayed at Rev. J.B. Lorentzen's until they settled on a farm owned by H. Hesselgren (where the present water reservoir is). Then they took a homestead in the Spring Park districtâ€”N.W. 30-57-5-W4. Karl and the boys erected a log house during the winter, working from a winter camp in a sleigh box.

Karl and Anna farmed, using a team of horses, which was also their means of transportation to the nearest town of Lindbergh, six or seven miles away. A very exciting event in the Hellquist family was the purchase of a Model A Ford. When they left Sweden, one of the "luxuries" they left behind was a car. 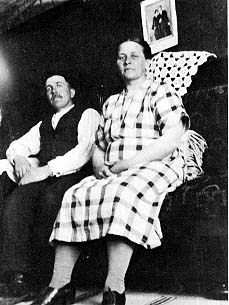 Listening to the radio was a frequent pastime, although numerous trips to Lindbergh were required to replace batteries.

North and South Gamier Lake was a favorite spot for fishing and swimming and made an enjoyable Sunday outing for the Hellquist family. Although there wasn't much machinery to make the task of farming chores less time consuming, there was always time for a Sunday at the lake or a day off to pick blueberries and cranberries. Cranberries were favorite for the Hellquist family as they were very similar to Swedish ligonberries. A day off to pick wild strawberries was also a day worthwhile.

Once Karl and Anna had settled on their homestead, the boys found jobs in the area as farm hands. Ernest went to work for Gus Swanson, Gustav for the Holthe family, an Carl for the Fish family.

A short time later Gustav and Carl decided to venture away from farm life and went to work in the pulp millin Timiskaming, Quebec. Carl returned to the Spring Park are after a short stay, but Gustav stayed on for another two years.

Upon his return to Spring Park, Carl went to work at Rindy's and through them, met the Nelson family, and married Grace Nelson. They settled on a farm in the Lea Park are where he cut logs at Fishing Lake to build a small log house which he later moved to the Spring Park area. The house still standing, although no one has lived in it for thirty-three years.

When Gustav returned from Timiskaming, he married Alberta Laughlin. They set up a homestead on N.W. 31-57-.' W4. They built a log house which was 14 x 20 feet, with just an axe and a saw. The furniture was all home-made from birchâ€”table, chairs, rocking chair, and a bed which was square box with four legs. The mattress was a big tick stuffed with straw. After a few months of use, the straw broke down, so the tick had to be taken out, emptied and re-filled

There was no steady income for groceries. One time all they had in the house was black coffee and some bread that Alta had baked, which was quite heavy, because she had to omit some ingredients that she didn't have. They lived on this for a week, until Gus could find an odd job for a few dollars.

They had a team of horses and two cows. Gus made the barn just big enough for the four animals. It had a straw roof. He cut all his fire wood with the swede saw. He made most of his sleighs. Their means of travel was by team and wagon or sleigh, or by foot. Later they got a buggy, which belongted to Alta's grandfather. He had brought it from Oklahoma 1910.

In 1941 Gustav and Alberta moved the house to the Spring Park areaâ€”S.E. 19-57-5-W4, where it still stands today, although it has had several additions. They chose a spot overlooking a beautiful ravine. The choice for a well was on an underground spring, which was identified by a row of larger and greener poplar trees which followed the spring. They were always known for their "good" drinking water. 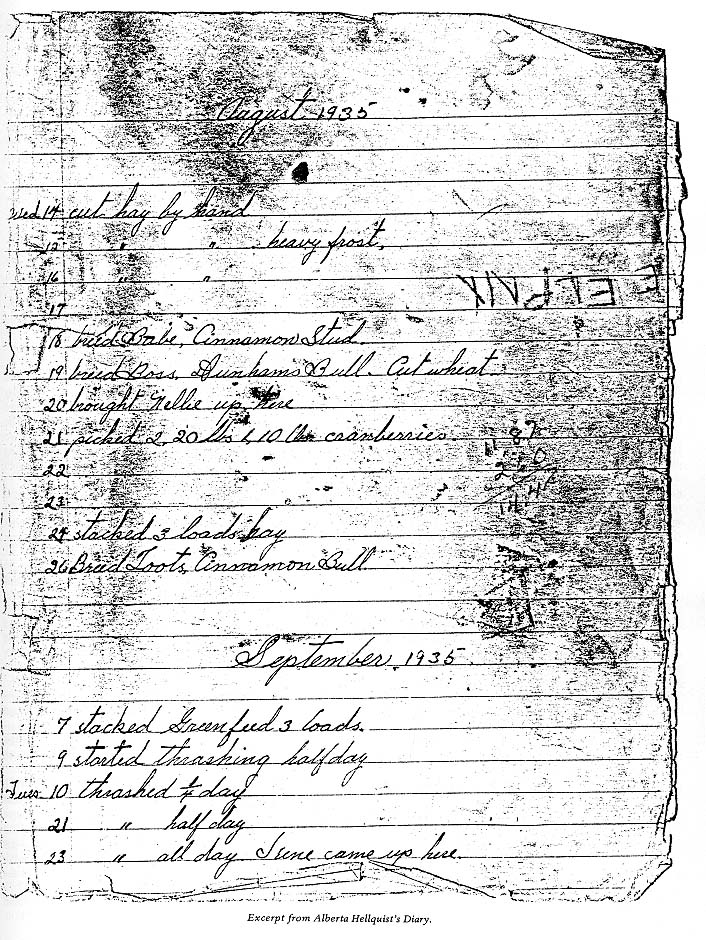 The house was heated by an airtight heater in the front room and a cast iron wood cookstove in the kitchen, which was also brought from Oklahoma by Alberta's family just after the 1900's. Bathing was done in a large round wash tub which was placed in front of the cookstove. It wasn't uncommon for everyone to bath in the same water.

Lighting was by coal oil lamp and Aladdin lamp, until later years when a 32-volt light plant was acquired.

A dependable source of income was from cream cheques -- although there was the nightly task of "milking cows".

In 1942 Ernest joined the army and went overseas in June of the same year. He saw action in Britain, Sicily and Italy. When he returned from the war in 1944, he and Marjorie Pinsent were married and took up residence in Edmonton where Ernest worked for the post office until his recent retirement. Gustav recalls that, although he and his family emigrated during the worst of the depression years, the friendly and helpful neighbors in Elk Point and Spring Park, made separation from their family and friends in Sweden much easier.

Gustav, Carl and Ernest were famous for skiing and for making their own skis. Ernest frequently skied to the Rindy farm and to Tillsons in Greenlawn. Gustav was known to ski some forty miles to the George Ronaghan farm to visit Alberta, who worked there. A different mode of transportation, but healthy.

An interesting trip Ernest recalls took place in 1935 or 1936. He and Earl Kepke went to High Prairie in a Model T coupe. Earl stayed in Peace River but Ernest went on the "freight" to Spirit River.

Ernest also remembers a Halloween trick he and some friends played at the Holley farm, when they moved a grain tank to the top of a granary. Ernest worked for Swansons at the time and was very upset when Mr. Swanson decided to borrow the fanning mill from Holleys and Ernest found that he had to remove the grain tank from the top of the granary. Much more difficult to take down than to put upâ€”and not nearly as much fun!

Karl and Anna Hellquist farmed in the Spring Park area until their retirement in the 1950's. Anna passed away without ever returning to Sweden. Karl returned with Gustav in 1965. He passed away in 1973 at the age of 93.

Alberta and Gustav, who farmed in the Spring Park area until 1974, are both deceased. Their son, Ray, and his wife, Carol, and their four childrenâ€”Craig, Mark, Tova and Davidâ€”live in Elk Point, where Ray teaches high school.

Their daughter, Elva, and her husband, Dan Libich, live in Edmonton.

Ernest and Marjorie are retired and live in Edmonton, where they have lived since they were married. Their son, Ted, after a stint of teaching in the North, presently works for the City of Edmonton Parks and Recreation Department.