Courtland DeForest Smith emigrated from Adair County, Iowa, to Southern Alberta in 1905. Land in the States was high priced and many people were coming to Canada to homestead. C.D. Smith returned to Iowa, then returned with Lewis and Clark expedition to Vegreville, where he rented a farm. He filed on a homestead south of Elk Point -- N.E. 30-56-6-W4. Court was married to Anna Louise Barnard and they had five children -- Fred, Edward, Harry, Mary and Harold, only three and a half years old then.

When the Iowa farm was sold, Fred and Ed took household effects, twenty head of horses, cows and machinery in railroad cars and started on their trip to Vegreville. The boys were thirty two days making this trip. They arrived in Vegreville in March, 1907. The first year on the Vegreville farm the crops froze. They received 18c per bushel for the wheat.

They came by wagon from Vegreville to their homestead. They built a log house and other buildings in 1907. The logs had come down the river. The men dug a well twenty five feet deep, cribbed with rock.

Land was broken and crops planted. Oats was the main crop, then Red Fife wheat. They got jack fish, gold eyes and pickerel from the Saskatchewan River.

The first post office was in St. Paul. Later at Hopkins Ferry. Jack Valentine had a store at Hopkins so they could buy their supplies closer to home. They got their mail twice a week.

Court Smith took cows on shares to pasture them. This was not too profitable as the cows got a disease and many died.

When the money ran out, the men went to Camrose to work on the railroad. They came home with $25.00.

In 1910 some of the men went to Cold Lake to trap and to see the country. They had to ford the Beaver River.

Mr. Court Smith was a very enterprising man. He bought cattle and was the first butcher in the district. He would cut off what meat the family needed and sell the rest to the stores. As well as being a farmer, he was a brick layer and plasterer. His sons learned these trades. Harry and Harold were amateur veterinarians.

The first Elk Point School was built in 1910, two miles east and one half mile south. Harold, youngest son, received his education here.

Mr. C.D. Smith was very active in the community. He was a Charter, later Life, member of St. Alban's Masonic Lodge in St. Paul. He passed away at the age of 82 years in January 1939. He was buried with Masonic honors. 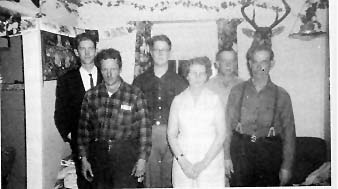 A letter written by Mrs. Court D. Smith to Mrs. Jess Lambright in the early 1920's:

We came to Alberta in March 1907, and lived on a farn north of Vegreville that summer, until the men could buil a house on the homestead and came up here in Novembe that fall. There was no roads, just Indian trails; There was no houses between here and St. Paul or Mooswa. There was just a telegraph station at Mooswa. Mr. Fish moved his family into a shack which stood on the place where Oscar Johnson lives. There is where Harvey was born. He soon built a house on the farm where he now lives. The Lambrights and Caskey also got settled on their homesteads. I think Roy Lambright is the only descendent of the first old settlers that is attending school here at present. Much more could be said.

The following history was read at a gathering of th people in the settlement a few years later. There has bee many changes since then.

In the year 1905 many people living in our vicinity in the United States were not satisfied with their surroundings, an they concluded to look for something better. Likewise C.D Smith made two trips to Canada, and while in Alberta he met O.J. Fish and Wm. Mabley from Dakota who said they had filed on land in the vicinity of what they thought was the garden spot, and that they intended to move there in the spring. When Mr. Smith returned home he had filed on Sc 30-56-6. Others in our vicinity hearing of this, concluded to move to Canada also.

In March 1907, we loaded our cars and started west arriving in Vegreville after a long and tiresome trip of eleven days on the passenger from being snow-bound. Many other families came about the same time. Some of them movir directly to their homestead, others leaving their families near the railroad where they could be more comfortable until buildings could be put up. Among these were J.C. Lambright, J.B. Caskey, O.J. Fish, Wm. Mabley, Geo. Shortridge, Jos Hunter, S.H. Garnham, Lyle and Ray Howard.

Chas Hood and Jesse Bellamy having located in this vicinity the fall before. In time all were settled in their new home very comfortable. In June of this year, 1907, a son came to brighten the home of O.J. Fish, who was named Harvey. He had the distinction of being the first-white-child born in the settlement.

We had to go to St. Paul de Metis for our mail, as that was the nearest post office. The first winter we were compelled to go without our mail for seven weeks on account of the deep snow and poor trails. We also drove to Vegreville, 85 miles, for our supplies, as St. Paul at that time was a very small burg. Later on, our folks, with others, made a trail south from the river to Vermilion, and a ferry was put in, called Hopkins Ferry. This was quite a benefit to the settlement. In those days houses were very scarce on these trails, sometimes making it quite a hardship on those who went out to the railroad for the necessities, especially in cold weather. After the ferry was put in, a post-office was established there called Hopkins.

In Sept. 1908, a settlement picnic was held on the sand-plain near Mr. Gobins, there being some forty people present which was enjoyed by all. Later on a saw-mill was brought into the neighborhood so the people could have lumber sawed and make themselves more comfortable.

In time the Presbyterian Society sent us a college student, Mr. Orton, who preached every Sunday during the summer in the different houses. Sunday School was also held. Later on a school house was built so that the children could be educated, and church was then held in the school-house. As the country settled up, small stores and different post offices were established, which spared the people some of their long trips. Those people that came later to homestead, while they thought it quite a hardship to be so far back from the railroad, knew but little of the pioneer life. Many of the children who came in an early day are grown and have established houses of their own as well as some of the bachelors, though quite a few are still enjoying single blessedness.

Now we have our little Town of Elk Point, with two hotels, three grocery stores, blacksmith-shop, implements, hardware, etc. We also have a doctor whom all appreciate