At the early age of fifteen, Joe Conrad, accompanied by his sister and brother-in-law, left his parents, his friends and his homeland, Lithuania, in search of better living conditions which he heard could be found in Canada. The year was 1926 and Joe, along with the numerous other European people whose quest was "the better life" boarded the ocean liner, Durich and arrived in Canada in June, 1926.

Arriving in Edmonton on June 26, 1926, Joe set out looking for work. Jobs were not that difficult to find but the types of jobs available to a "man" of fifteen made life very difficult. For three years he worked in the Edmonton area at several jobs from farming to working for the city of Edmonton. In 1929, he tried a different endeavor -- this time with the C.P.R. near North Battleford, Saskatchewan.

In the fall of 1929, Joe came back to Alberta to homestead. His brother Bill had already established a homestead four and a half miles north of Elk Point so Joe acquired more land and joined his brother. To supplement their farm income Joe recalls him going out to pick roots at fifty cents a day and working on the threshing crew for one dollar a day. During these depression years the Elk Point creamery required wood for its operation and Joe, looking for an additional source of income, sold wood to the creamery for twenty-five cents a cord, cut and split. In June 1933, realizing that more land would be needed to support two families, Joe left the land to his brother and moved to Toronto where his sister and brother-in-law had settled. Here he worked at whatever job was available until he was able to gain employment with General Motors of Canada where he worked as a machinist from 1933 - 38.

After working at several jobs, usually not of choice but of necessity, Joe still considered farming to be his chosen vocation. Thus he returned to Elk Point in 1938 and purchased a parcel of land for the sum of $3500.00 ten miles west of Elk Point on the north side of the North Saskatchewan River near Hopkin's Ferry Landing.

While Joe was experiencing these new and varied avenues of life, a young girl, Ann Sheyka, who was destined to become his wife, was making her way to Canada from the Ukraine. Her father, Nick Sheyka came to Canada in 1925, and having found what he considered a better place to bring up his family, wrote to his wife and daughter in the Ukraine to join photos Because of her young age, Ann remembers very little of her journey to Canada; she does recall the ship voyage as being very rough and her mother, Eva Sheyka being very ill from the turbulence. Ann and her mother journeyed by train to the Slawa area where her father was staying with his cousin, Mike Sheyka. When his family joined him he started homesteading in the Slawa area too and eventually settled on the south side of the North Saskatchewan River not too far from the Hopkin's Ferry Landing.

As a girl, Ann remembers many times of hardship when work was difficult and money was scarce. The winters then she recalls were more severe and the snowfall overly abundant. Their home was three and a half miles from the main road and in order for her to get to school some mornings she remembers her father having to walk ahead making tracks through the deep snow until they reached the main road.

A river like the North Saskatchewan, you would think would prove to be quite a barrier to travel and communication in the early 1900's. This didn't seem to be the case. When it came to socializing and country dances, rivers didn't stop anyone. It was at one of these dances that Joe and Ann met and thus began a relationship that has flourished and lasted to the present day.

If at that time they had had write-ups for weddings as they do now, it probably would have read, "For her going away outfit the bride wore a gingham apron and a chef's hat", for the day after the marriage the threshing crew pulled in to harvest Joe's crop. The honeymoon was therefore spent pitching bundles and cooking meals for the hungry threshers."

By this time Joe's parents, Mr. and Mrs. Anton Conrad had come to Canada and were living with Joe and Ann. Therefore in order to accommodate two families in the small log dwelling which existed on the place, more logs were brought out of the woods, and an addition was added to the house making it very comfortable for the two families.

Joe's father was a skilled fisherman in his homeland earning much of his livelihood from that industry. In those days the North Saskatchewan river was not polluted and provided a means by which he could continue to use these skills. Joe recalls that some of the tastiest and nicest fish he had ever seen came out of the river at that time.

Getting out, whether to socialize or to do the shopping depended largely on the elements. During the summer Joe's 1927 Chev had little trouble getting them to where they were going. The problem lay in getting home at times, because while they were out it had rained heavily. Roads at that time were built to accommodate horses and buggies as cars were not too common yet.

Andrishak's store in Elk Point provided not only a place to do the marketing but also a place for meeting people and socializing. Ann recalls that in those days people usually shopped on set days like Tuesday or Saturday so that they could visit as well as do their shopping. It was through these shopping trips in Elk Point that Ann and Joe became friends with many people in town and these friends got to know where Joe and Ann lived. Their farm was very picturesque with the buildings situated in a river valley and a fresh water spring trickling across the yard. People from town and the surrounding countryside would frequently gather there on Sundays -- the cool spring provided a natural cooler for the beer, the ladies would bring a picnic lunch -- and spend the afternoon socializing, playing horseshoes and target shooting. 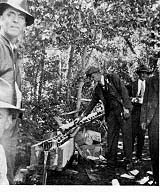 Cooling the beer in the natural sprlng at a Sunday afternoon get-together.

The second world war started and life styles had to be changed. Many things were rationed and Joe and Ann recall how things like sugar, gas and liquor could only be purchased with coupons. Ann and several other ladies in the area became active in the Red Cross. They met at each others homes and prepared packages to be sent overseas for many local boys were stationed there fighting for their country. During this time Joe and Ann's life style was not only modified by the war but also by the addition of a new family member. On July 18, 1943 their first child, James Frank was born.

When Joe bought his farm, there existed a large log building which at one time had served as a home, but was now being used as a shop. Joe replaced the delapitated floor and the old shop suddenly became a community hall. As long as there was someone who could play some musical instrument, it seemed that everyone was ready for a dance or party on the weekend. This old shop was used in this manner until the Stoney Lake Community Hall was built.

In 1944 Joe revolutionized his farming operation by buying his first tractor. Horses were still a basic necessity on the farm but they were starting to be secondary in importance to the farming operation.

Joe and Ann, reflecting on the past remember life in general as being more difficult than it is now. They recall even the natural elements as being more severe, the seasons filled with more violent storms. It was during one of these winter blizzards, on February 15, 1948 that their second child, Donald Joseph was born in the Elk Point Hospital. To them the winter of 1949 - 50 was the worst winter ever. Ann talks about going to the dentist in St. Paul â€¦ "We (Rodrick and Margaret McGinnis and I) started out by car but we could see that we weren't going to get too far, so we came back to Elk Point and caught the train. On the way to St. Paul we saw a car, I think it was Fred Andrishak's car, on the road more than half buried by the drifting snow. The storm was so bad that the trains didn't run for two days so we were stranded for that time in St. Paul." Joe remembers this trip also eve though he didn't go with them. At home he was having problems of his own. His younger boy, Donald, was very ill, running an extremely high temperature and there was no possible way of getting him to the doctor. Using his own kind of medical know-how he managed to break the fever and all ended well.

Living by the river never posed any fears of flooding except in 1955. This year the muddy water crept over its banks in many places and completely covered the bridge by Hopkins Ferry. Fear however was overcome by curiosity ( the things one might see floating by on the river). There were run-away ferries, ferry shacks and huge piles of lumber well as a lot of debris.

Life at this time was characterized by hard work, times of joy and times of sorrow. In 1951 Joe's father Anton passed away. In 1957 Ann's father, Nick Sheyka died and one year later Joe's mother passed away.

The rest of the years that Joe and Ann spent on the fan were spent with the usual work involved with farming and enjoying the few hobbies that they had time for.

James, their oldest son, left home in 1963 and completed his grade twelve at Alberta College, going on to further studies at the University of Alberta the following year. His teaching career began at Highlands Junior High School in Edmonton, in 1966. In 1967 he married Alma Gadowski (daughter of Mr. and Mrs. Stanley Gadowski of St. Paul) and they settled in St. Paul where James taught at the Glen Avon School and Alma worked for the Imperial Bank of Com merce. James has taught for the Glen Avon School Board until the present time with the exception of the 1969 - 70 school term at which time he returned to the University of Alberta to complete his Bachelor of Education program. Alma is now employed as a full time homemaker caring for their two sons: Curtis James born November 9, 1972; and Jason Joseph, born April 19, 1975. 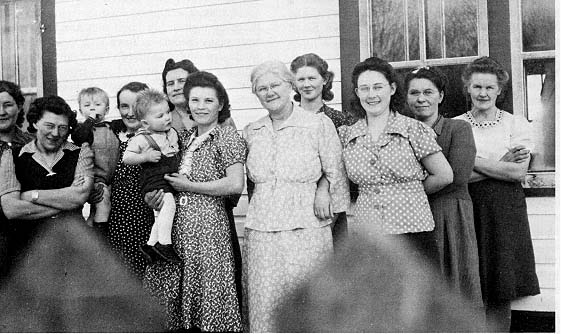 RED CROSS CLUB DURING WARTIME AT HOPKINS, ABOUT 1942

Donald left home in 1966 to further his education at the University of Alberta from where he graduated in 1970 with a Bachelor of Education degree. In 1970 he took his first teaching position in Heinsburg. In 1971 he married Sylvia Saiko (daughter of Mr. and Mrs. Fred Saiko of Elk Point) and moved to Elk Point where he has been teaching to the present time. His wife Sylvia, also a teacher, taught in the Elk Point Elementary School from 1970 to 1975 at which time she decided to become a full time homemaker taking care of their two children: Clayton Joseph, born September 7, 1973; and Tobey Sylvia, born November 15, 1975. In 1976 tragedy struck and they lost their son Clayton to the mysterious "Crib Death".

In 1975 Joe and Ann seeing that neither of their boys were interested in taking over the farm, sold it and moved to Elk Point to retire. Now both are enjoying being able to spend their whole time on their interests and hobbies which had to once be done in their limited leisure time on the farm