Harry L. Day was born July 4, 1880, the son of a cooper. He started in Toronto as a shoemaker by trade. Later he decided to enter the ministry, on Sept.27, 1905, at Wycliffe College in Toronto.

In 1907, he married Elizabeth Albinia Marshall, after which they spent the next two years as missionaries in the Mackenzie River Diocese. In 1909 he was appointed to St. Saviour's Anglican Parish in Vermilion, with his wife in charge of the Sunday School. Here they remained for two years. 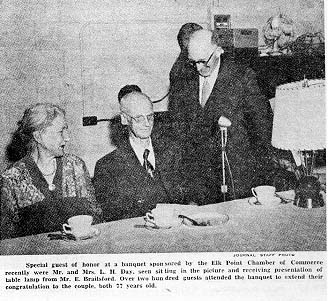 Special guest of honour at a banquet by the Elk Point Chamber of Commerce were Mr . and Mrs. H.L. Day seen sitting in the picture and receiving presentation of table lamp from Mr. E. Brailsford. Over two hundred guests attended the banquet to extend their congratulations to the couple, both 77 years old.

Mrs. Day was born in Toronto, June 25, 1880, the daughter of James Marshall a Grand Trunk Railway freight superintendent. Her mother, Francis, was a teacher. One of Mrs. Day's teachers was Alexander Muir who wrote "The Maple Leaf Forever".

Many Elk Point settlers in Vermilion for supplies visited the Days, telling them of the Elk Point area. In 1911, Mr. and Mrs. Day left Vermilion and settled on a farm two miles west and two miles south of Elk Point. They had two cows, a few chickens, a dog and a cat. They got their mail and some supplies at Hopkins but the main supplies required a three-day trip to Vermilion. To be prepared for a night on the road, a cover was taken for the wagon.

Mrs. Day remembers people were all friendly. Two neighbors helped them cut trees and build a log house 24 x 24 feet. Cream and butter were placed in a bucket and lowered down the well to keep cool.

When King George School opened in 1913, Mrs. Day was the first teacher, remaining two years. The first year she boarded at Dhiel's, who lived near the school. In 1914 she rode horseback from home everyday, since now she could cross the river at the Elk Point ferry, which had just been put in. Mr. Magnusson was the ferryman and, when he saw Mrs. Day riding down the hill in the morning, he would hold the ferry for her so she would not be late for school. At that time the country was wild and animals roamed at will. Once a moose crossed the road in front of her, running away towards the river, but not before it had badly frightened her horse.

In 1916 Mrs. Day taught the Elk Point School for one year, again riding horseback - seven and a half miles. Dr. Miller later teased her that she started the first school bus in Elk Point. She would stop and set Vera Babcock on the horse behind her and take her to school. Vera was just starting school and two and a half miles was a long walk for such a small girl. Mrs. Day said her horse was very well trained and stopped by itself outside Babcock's in the morning. Mrs. Day was good to the children. She realized they did not have many treats so would often take two cast iron pans to school to make taffy. The children loved to pull the taffy and eat it.

In 1917 and 1918 she taught at Richland. Since most of the settlers were Americans, picnics were always held on July 4th. A committee finally decided to celebrate on July 4th one year and on July 1st the next year. Everyone took along picnic lunches. There were baseball games, races, horseshoes, and speakers. Mrs. Day tells of Charlie Hood, a staunch Yankee, having a few altercations because he spoke too much of the United States.

Music for dances was supplied by Ed Boyd on the violin and the Parker boys on the guitar. Everybody dressed the same. Very few travelled more than a few miles from home. In 1925 Mrs. Day's mother died so she and her husband went back to Toronto. Roads were only trails and took the path of least resistance - around trees, knolls and rocks. Magazines were Ladies Home Journal and Star Weekly.

Before the Days could obtain title to their homestead, they broke thirty acres, built a house and lived there for three years. Oxen were used for breaking. The first crops were oats and barley. Later wheat was grown and taken to Vermilion to be ground into flour. A threshing machine came to each settler in turn.

Mr. Day conducted services and funerals throughout the district. During the war of 1914 - 18 Mrs. Day worked for the Red Cross, knitting socks, mitts, sweaters and scarves.

She was considered a liberated woman, being the first one in the district to wear slacks. When riding, she wore a riding skirt made of brown corduroy and buttoned down the front.

The Days retired in Elk Point. Mr. Day was responsible for building a good fence with a strong gate around the west cemetery. Iron posts were used. Markers were put on all graves. In 1968 the cemetery was enlarged to the east.

Mrs. Day enjoys all the conveniences she never had in her youth. At 96 she is a very alert little lady, living alone, interested in her community and the world around her. Her religion means much to her. Even though she cannot attend church, she listens to sermons on the radio every Sunday