by A. J. Bartling

I wrote in for the "Reflections" of the early day building of the highway south of Elk Point to the old creamery, I mentioned using dump wagons to haul the earth. I want to make that a lot plainer. We used just any kind of wagon, with two inch plank bottom, sides and ends, to unload, a man on both ends lifted the planks, and the earth fell free. I had been asked several times about a dump wagon, and I don't know of any, at that early date. I did drive one for a few days in 1927 when the railway was being built to Elk Point. I also first met Hugh McQuillan at that time; he was also driving a wagon.

Being a jack of all trades and a master of none, I want to tell of my time and work at many, many jobs. In 1930, our last year on the McNitt farm, we had a good crop. I bought six-row malting barley from McKenzie seed house for one dollar per bushel. We had a nice crop but it cost eight cents a bushel for threshing and if I shipped a carload Calgary Malting would pay thirteen cents per bushel. I could see that we could not farm longer, as living three miles from town, the children would be going to school, and I could not see how I could drive the children to school, and bring them home, and get much farming done.

The winter of 1930 I cut and hauled about fifty saw logs to the C.D. Smith saw mill on the Ernest Scott farm. I had the logs cut in lumber the spring of 1931, and dry piled, and left until fall 1931. Dr. Miller gave us the right to build a house and log barn on one acre across the highway east of the creamery. We brought eight milk cows with us; we had good cows, cross Holstein and Ayrshire. We started selling milk in town shortly after moving to our new home. We sold to 0. K. Nelson, Frank Suter, McDonnells, Jack Jenson and more. We sold about twenty quart sealers each day at 5 cents each.

I must mention Frank Suter's mother. One night it was fifty below or more and the back door was frozen solid on the bottom. I pounded but Mrs. Suter had company and did not hear me, so, I went to the front, and opened the door. Milk men never knocked. I set the milk inside and Mrs. Suter called "Just a minute". Soon she came and said, "Mr. Bartling, company at the front door, and peddlers at the back." I did not like that and told her the next night, "The door was frozen shut last night and I pounded on the door but no one came. Next time should that happen, I will set it outside. It won't take long and you will have ice cream." We sold milk until 1935 when I received a contract with the C.N.R. to deliver express and freight to the town. I was then too milk, so we sold the cows. We never kept any calves. 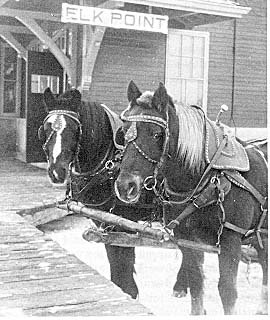 Augie Bartling's dray team ready for the freight at the railway Station.

Grant was a great man. Too bad he didn't see well, but, even though his eyesight was very poor you couldn't stump him on any job. After we got settled in town I built on the south side, 12 X 27, and we kept adding inside until we had a fair home and I had it so near to work. The town council thought a big Xmas tree on main street would be nice, so they asked me to come to the meeting and they asked me if I would take on the job of bringing in a large tree and erecting it mid main street cornering Joe Mah's and where the Toronto Dominion bank stands. "Well," they said, "The town can't afford too much. Can you do it for five bucks?" I told them it would take a good day to bring the tree from the swamp three miles north but I said I would also like to see something like that to brighten up the town at Xmas. I took the job but I dug a hole on Main Street where the tree was to be set up and put a big log, cut even with the top of the street because come Xmas time the earth would be frozen bad. When the time came to set the tree up I just took a long steel bar that was sharp at one end and jabbed the bar into the wood and it wasn't too long a time and the hole was free. I did the tree job for several years.

Even when times were getting better I still did the tree job for the same price because I wanted to see it myself. I want to mention one year. The tree was about twenty feet in length. Paul Stepa and Jim Abraham said they would help. I had the butt end of the tree chained down to the dray, Jim jumped up. on the dray and when I loosened the chain the tree started to roll. Jim fell down on the dray, and the big tree rolled on his head and neck. Jim was getting blue in the face by the time Paul and I got the tree off his neck. To hold the tree firm we used four 2 X 4's to brace the tree. I filled the hole up level with water and it soon froze solid. I had to take the tree down also but that was fine. I took it home and trimmed it and cut it up for fire wood. I sold the dray business, horses, barn etc. to Frank Keitges in 1946 as I could no longer do the hard work, after having a bad spell in hospital, and an enlarged heart.

In 1946 1 went to work as the butcher in the Elk Point Co-op. I worked at the Co-op until spring 1949, I then started work at the Andrishak store as butcher. I stayed until the spring of 1950. I had applied for a job at the Lindbergh Salt Plant but I kept at work for Jack Zarowny setting up farm machinery until I started work June 8, 1950 at the Salt Plant.

I took the job of digging a pit down at the river for the June 9, 1967 Canoe Pageant barbecue. That was a big job to hand-dig the pit. Max Fisher loaned his big truck to bring wood from Dr. Miller's farm on top of the river hill on the west side of the highway. I also brought a truck load of rocks to put in the bottom of the pit, then brought about two yards of coarse gravel from Dr. Miller's farm to cover the rock. I started the fire early on the morning of June 8 and after the Co-op closed on June 8, Carl Nelson, Joe Mah, John Looy, Cliff Flanders and myself went to the store and cut all the meat in about ten pound pieces, put salt and pepper, and wrapped many ply of butcher paper on it. It was a big job. We finished after midnight, and then we loaded the meat on a truck and went to the pit at the river. We borrowed from Hayward's enough 4 X 8 slabs of iron to cover the top of the pit to keep the heat in. I did all this for the sum of fifteen dollars. I never regretted any donation I gave to Elk Point and district, to make our town and district a better place to live.

I spent one term on Elk Point town council, 1948-1949. I tried to do my best to try and keep the town mill rate down. I said to the other councillors "If we can't afford to drive better than a Model T Ford and own it, that's better than letting the mill rate get out of hand, it also keeps people coming and settling in our town." I handed in my resignation the fall of 1949 because the other councillors insisted that I look after the stray dogs, or ask the dog owners to keep their dogs tied up or locked up. Many people in town got so mad at me they wouldn't speak to me so I thought I am not getting one cent for making bad friends, so I resigned.

I started to work at the Salt Plant January 31, 1968. I had many bad, hard times to and from work, but in all those years I was never late for work because I started out early, should a blizzard have taken place. I enjoyed my work at the Plant. I hold the record for all of Canada as near as I know, for operating the salt block press the longest time. We always had real fine managers and foremen. All you had to do was do your part. They did more than their share of keeping the workers happy.

I belonged to the Elks Lodge B.P.O. Lodge 460 long before we had thought we could build our own hall. When the Lodge members started a drive for funds to start to build I gave the lodge one hundred dollars which I really couldn't afford at that time and I donated a lot of time and work. I remember well Brother Axel Iverson and I worked until three in the morning to finish the entrance because the official opening was the next night. I always paid my dues but I see in the Reflections the names of brother Elk members and my name seems to be omitted, more likely an over sight; or was it?? 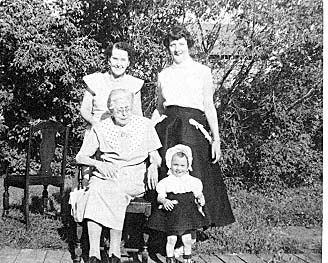 I never held an officer's job, as my hearing was, and has been very poor. Too many years operating the noisy block press! I mentioned before in my time in Elk Point the music I donated to pay for the first silent movie machine, and for a new piano in old Elk Point Community Hall. The night we had enough money to pay it in full, it burned in the fire that destroyed most of the old part of town. The sad part was, there was no insurance.

We now live in Edmonton since July 4, 1969. We own our own home and have very nice neighbors and visit some of the more than two hundred Elk Point and district people who live here. Our three married daughters live near and our grandchildren visit us often which passes the time. We belong to the Beacon Height Senior Citizen Club in East Edmonton, and play whist each Tuesday from one-thirty until four.  I still drive the car but we mostly travel by bus. We each have a bus pass, in 1970 five dollars each, and still travel on those passes. And that is the way it was and is.