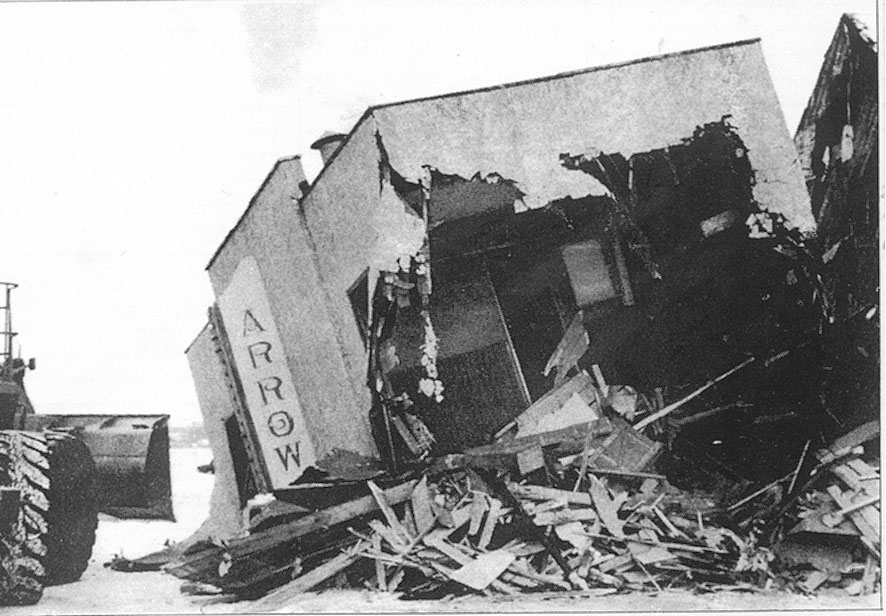 DOWN IT GOES - The front portion of the Arrow Theatre was bulldozed Iast week, in preparation for moving the main part of the structure out of town.
Photo by Ron Barwick

I first ventured into the theatre business in 1905. Shortly before that I had been discharged from the Royal Canadian Corps of Signals (Army). With the help of my father I purchased the old Arnott Hall which was built in 1931. Prior to 1945 an itinerant showman played a movie in Elk Point about once a month. Little did I realize at that time that I would be in the theatre business for the next 42 years.

Soon after we purchased the hall, many improvements had to be made since everything was badly run down. First I bought two 16mm projectors and started playing movies once a week. In 1948 an addition was made to the front as well as extensive repairs to the projection room. In 1950 I ripped up my maple floor and replaced it with a sloping cement floor. Two hundred and eighty theatre seats were then installed.

In 1952 I had two 35mm projectors installed so I could play newer and better movies. During the 1950s I played to packed houses continually and showed movies six days a week, with a matinee and two evening performances on Saturdays.

During my 42 years I played over 4500 movies. Five generations of children attended, as well as thousands of adults. I still have a record of all the movies I played and the dates they were played on. In the 1950s and early 1960s, movies were clean, not like the X-rated garbage that appears in many available videos shown today.

When TV first came to our district in the early 1960s, business plummeted but gradually came back. To compensate this loss my wife and five children faithfully pitched in and helped to keep my operating expenses down. Without their help I could have never survived.

The end, however, was in sight during the middle 1980s when video movies became available. Suddenly it seemed theatres throughout all of Canada started to close down because of the lack of business. Expenses in my situation kept spiralling - the film companies kept raising their film rentals and the express companies, as well as the gas and power companies also wanted increases. You were caught in a squeeze and you could see the writing on the wall.

About then I started getting my old age pension and decided I had had enough of the theatre business. Luckily I had a buyer - the nearby Coop store needed additional parking space and purchased the property.

During my 42 years in the theatre business I enjoyed meeting many fine people and found it very difficult to close my doors. My final movie was played on Saturday, December 10, 1986. It was a free Christmas matinee played for the children. It was made up of a number of Bugs Bunny cartoons. It ended with the usual Bugs Bunny ending of "That's all, Folks" and it really was.