John Seniuk, my father, was born August 28, 1888, in the village of Borshciw, province of Ternopil in the Ukraine. At the age of twenty-two he came to Halifax in the year of 1911 and was met by his brother Peter. He later went west to work on the railroad in Revelstoke, B. C. where he saved enough money to buy the S. E.30-55-6-W4 in the Northern Valley district later buying the N.E.30-55-6-W4 from Mr. Keller.

In the fall of 1918 he married Annie Pastushak, the oldest daughter of Andrew and Dora Pastushak, who emigrated from the village of Hadenchiw, province of Hushatevi in the Ukraine in 1911. Andrew is still alive and celebrated his 100th birthday May 18, 1977 at the Hardisty Nursing Home in Edmonton.

In the summer both were busy clearing land and ploughing with a walking plough. The trees were utilized for fire wood which was used to heat the house, all cut by bucksaw. A well was dug by hand and water was pulled by rope and pail. The house was lit with coal oil lamps, later by Aladdin lamps. People had to be self-sufficient so Mother did all of her canning of meat and wild berries.

Vermilion was the center for marketing, purchasing and grinding of flour, with the trip taking three days. Later the grain was hauled to Derwent, then to Elk Point. Dad was a pretty fair cook. He baked an excellent cake and his sourdough pancakes were something we kids always liked. To relieve the boredom of winter Dad would be making things or repairing harnesses while Mother and the girls would strip goose feathers to make pillows and quilts. Later our entertainment was a radio and a gramaphone. 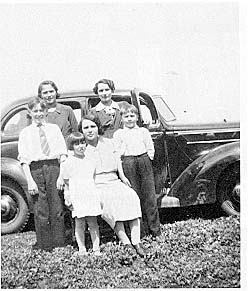 BACK ROW, Left to Right Pauline and Mary 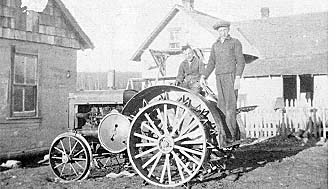 I can recall one of his "do-it-yourself" techniques when he decided to extract his sore tooth. It took several evenings until it became loose and was removed. It is perhaps the reason why his grand-daughter became a dental assistant.

Dr. F. G. Miller was our first doctor. He arrived in Elk Point about 1920. With severe winters and difficult modes of travel he did a marvelous job. Later he was assisted by Dr. Ross.

Threshing was usually a community affair which involved from eight to ten men. In 1947 my father bought his own threshing machine which I ran until 1959 when we purchased our first new combine.

Power was first produced by a 32-volt plant, later the line went through about 1958.

We all attended King George School which was three miles away, walking in summer and by horse and cutter in winter.

My parents observed Christmas by the Julian Calender on January seventh. Christmas Eve, January sixth, was a very special evening celebrated by eating of twelve meatless dishes, and a lot of caroling after supper. Easter was different. The family went to confession on Good Friday and blessed the food. Easter Sunday was looked forward to as a big day as it was the day we could eat the blessed food. I can recall one time a few days before Easter when Dad was smoking some ham and sausage he had made and the smokehouse caught on fire.

The Seniuk's were blessed with a family of seven children-Paul, Mary, Pauline, Bill, Harry, Stella and Steve. Paul passed away at the age of eighteen months during the flu epidemic. Mary married Bill Soltys. They lived in Ocean Falls, B. C. where she worked in the hospital until her passing at the age of thirty years. They had no children. Pauline worked in Ocean Falls and Vegreville and married Harry Chubey. They reside in the district and have one son and two daughters. I (Bill) worked on the cat trains at Hay River and Yellowknife on Great Slave Lake, N.W.T. I married Olga Andriaschuk and have two sons and one daughter and now reside in the Elk Point district. Harry worked on cat trains the same year, then on road construction and at present resides in Edmonton and works for Alcan Siding Applicators. He is still single. Stella is married to Dave Blazenko. They have one son and two daughters and reside in the Elk Point district. Steve spent some time working at various jobs. He is married to Carolyn Wouters, daughter of Carney and Alida Wouters. Carolyn is presently nursing in Elk Point Hospital and Steve farms on Dad's place. They have two daughters.

Dad at sixty-eight years of age was laid to rest on December 14, 1957, in the cemetery of the Northern Valley Church to which he had belonged since it started.

Mother is presently living in her own home in Elk Point.