In Fort Saskatchewan, Edward Kepke married Gertrude Omness. The year was 1908. They soon moved to the Vegreville area and in 1910 Ed Kepke filed on a homestead in the Spring Park district. They moved to this homestead in 1911 along with their thirteen month old daughter Florence. The move was made by horses and a wagon and a loaded hay rack in which they carried hay, oats, food etc. They also brought along eighteen head of cattle. It was a slow journey taking from May 24 to June 9. The first morning on the road they wakened to find six inches of snow had fallen on their camp. The North Saskatchewan River was crossed at Brosseau.

For the first few months the little family lived on the Burmaster property in a little shack. This land was later owned by Ed Kepke and later again was owned by Gus Swanson. Mrs. Kepke sent to T. Eatons for a bolt of canvas from which she and Ed made a tent in which to live on their own land. The tent had a board floor and three foot walls. Just before Christmas that year they moved into their own two room log cabin. In a year or two Ed had taken out logs for a six room house. He hired a neighbor, Joe Peters, to do the mortar work on a field stone foundation. Joe was a powerful man with a very short temper. We are told there was one particularily large stone that no matter how he tried would not fit into the foundation. Angered, he picked up the stone and threw it towards the road, about thirty feet. Mrs. Kepke (Mrs. Swanson) said it was still there when she left the farm in 1945. No one man could move it. Ed Kepke died in 1919 and left a wife and four children, Florence (Mrs. Raymond Hammond), Auburn, Earl and Rufus.

In September of 1920 Mrs. Kepke married Gustav Swanson. Gus had also homesteaded in 1910 on the quarter section directly west of the Spring Park School. Gus then went out to work in the Stettler area for a few years, later to return to the homestead and run a well drilling rig in partnership with Mike Todd. The rig was powered by a horse. These two men batched in a log shack until Gus married Mrs. Kepke.

In 1945 Mr. and Mrs. Swanson retired from the farm and bought a house in Elk Point. Gus died in 1950. In 1960 Mrs. Swanson moved to Kitscoty only to move again in 1963 to Greenwood, B.C. where she now resides in her own wee house about two blocks from her son Auburn Kepke and myself. Another two blocks from us live Mrs. Swanson's daughter Florence and husband Ray Hammond. At time of writing Mrs. Swanson is in fairly good health and looking forward to her 89th birthday on July 20,1977.

The Kepke and Swanson families live now in parts of Alberta and B.C. Florence married Ray Hammond in 1928. Her school years were spent in the Spring Park School. They settled in Lashburn Sask. and had two sons, Raymond and Robert. Robert was in the air force for twenty-nine years and now lives in St. Thomas, Ontario. Raymond drove truck for a mining company in Wells, B.C. and died in an accident there in 1953 and is buried in Barkerville.

Auburn married me, Nellie Keller, in 1934. We lived on the old Joe Peters farm on which the Spring Park School had been built in 1917. In those days we travelled by horses and democrat. It was quite a trek each Sunday morning to attend mass in Elk Point. We later attended mass in the Lindbergh Catholic Church, built to a great extent by my father, Joe Keller. As the years went by we had three daughters, Delcie, Joan and Colette. All three attended the Spring Park school until it was closed and the children transported by bus to Elk Point. (Mrs.) Laura Van Arnam was the last teacher to teach at Spring Park. Georgina Miller of Elk Point told Delcie (in later years) that on the first day of the change over the Elk Point students were all waiting to see what those "country bush rabbits" would be like. It so happened Delcie had no school bag so used a small square covered over night case for her books, and as a result was dubbed "The Bush Rabbit Peddler". It did not take long before all were accepted both socially as well as academically.

In 1954 Delcie married Walter Cox of Greenwood, B.C. where they and their two sons make their home.

Colette moved to Greenwood, B.C. with Auburn and I She completed her high school and entered the Psychiatric School of Nursing at Essondale in 1962. (Now known as Riverview Mental Hospital) She married Russ Martin of Pitt Meadows, B.C. in 1964. They have two sons and Colette is still nursing at the same hospital.

Earl Kepke married Mabel Pederson from Barrhead during the World War II years and now they live in Edmonton. They have a family of four, Keith, Norma, Donne and Gary.

Rufus Kepke married Viola Laughlin in 1949. They bought the original Kepke-Swanson land and farmed a few years. Their daughters Linda and Myrna were born during this time. Rufus served in the army during the war years. In later years he sold the farm and moved to Lindbergh where he was employed with the Canadian Salt Co. until his death in July of 1973. Both Linda and Myrna were educated in Elk Point and Linda married Walter Ference who also attended high school in Elk Point. They make their home on a farm in this area. Myrna is single and a member of the Peace Keeping Force stationed in Nanaimo, B.C. after serving two or more years in Lahr, Germany. 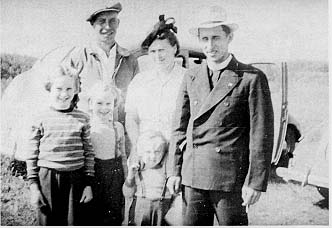 Myrtle Swanson married Howard Robertson in 1942. She completed her high schooling in Elk Point, and went on to attend the Vermilion School of Agriculture for one year. They now live in Cranbrook, B.C. and have a family of five: Jim, Myrna, Janine, Glenys and Christine.

Lawrence Swanson married Vera Cinnamon and after living in Yellowknife a few years moved to Spring Park on the former Torvilla place. Their children, Ellen and Ronald started school in Elk Point. We remember Vera telling about calling Ellen for school on her second day. She said, "But Mom, I already went yesterday". Little did she realize that she had twelve long years of it ahead of her. In 1956Lawrence quit farming and moved to Kelowna where he now resides. Ellen is married and is in Victoria, and Ron, also married, lives in Port Moody, B.C.

Ernest Swanson started grade school in Spring Park and completed high school in Elk Point. He married Elenor Daruns of Wetaskiwin. They bought a home in Red Deer and have a lovely family of one son and six daughters. Ernest now lives in Calgary. 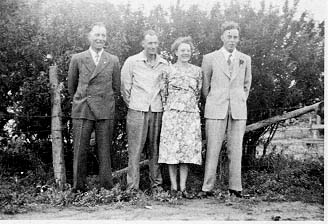