Sidney (Sid) Male was born in London, England, on September 17, 1893. He joined the army at the age of sixteen, saying he was eighteen. All his brothers were in the army. He trained in India.

When the 1914 war began, Sid went to Germany right away. He belonged to Inniskillan Dragoons (Cavalry). He went all through the war with only one minor wound. He stayed on in Germany with the Occupation Forces for one year.

Sid came to Canada in 1921 and bought land at Little Gem, near Youngstown. In 1931 he came to Elk Point. A wagon covered with a tarpaulin held his household effects and a crate of chickens, so he had eggs on the trip. He came through Taber up to Wainwright, letting his horses graze and feeding them a few oats. He crossed the North Saskatchewan on the ferry with Mr. Monkman.

He met me, Mary Carey, when my parents and I came up from Foam Lake, Saskatchewan, to visit my sister, (Mrs.) Clara Howe, who lived two miles east and half a mile north. The old house is still standing. Here Sid and I learned to sing duets. We later sang in the choir. Sid homesteaded S.E. 17-57-6-W4. I worked in the hospital. I had taken two years of nurses' training so was a valuable help to Miss Signe Holter. Sid and I were married on March 30, 1933, at the manse by Rev. Whaley. The bride wore a long powder blue dress with silver accessories.

A few days after the wedding, Mrs. F.G. Miller drove a team and sleigh out to Mrs. Howe's home with about a dozen ladies from the Ladies Aid. Olive was sent half a mile north to bring the bride down for this occasion. It was a great surprise to me. I was the recipient of many good wishes and gifts.

Both our sons, Charles and Sidney, were born in the old hospital. In the meantime, Sid cleared off the land, first with horses, and, finally, Frank Keitges did some clearing with his bulldozer.

When the Second World War started in September, 1939, the children were small; Charles was four years old. Sid joined the Canadian Veteran Guard of Canada. He was stationed at Medicine Hat to guard German prisoners. He also took part in moving Japanese out of Vancouver, also guarded officers at Kananaskis.

The railway offered train passage to soldiers' wives during the war, so the boys and I could visit a little in the summer at Medicine Hat. The trains were packed. We carried lunches. The trip from Elk Point to Medicine Hat took two days and one night. We stayed at the Corona.

Sid was guarding German officers at Kananaskis when the war ended. They could notbelieve the Germans had lost the war.

Before the war ended, Sidney was severely injured in June in a runaway caused by a dog. Charles was thrown clear but Sidney was cut by the wire fence. Gerry McAleese came along and rushed Sidney and I to the hospital. Thanks to Dr. F.G. Miller, Sidney's leg was saved.

During Sidney's stay in hospital, I was diagnosed as tubercular and was sent to Keith Sanatorium near Calgary, where I spent two years. Our good neighbors looked after Charles until Sid came home to look after his two boys until I returned.

Charles took over the farm and he and I still live there.

(* Mrs. Male died just before this book went to the printers.) 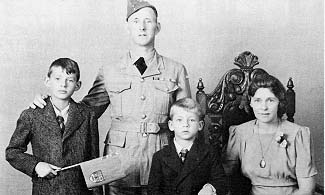