Alex Lindquist left his home in Sweden at age eighteen. He had to learn English and found it was hard to go into a restaurant and order as he did not know what he pointed to. Once they brought him a big lobster, but once he got on to ham and eggs it was much better. Alex was born July 15, 1894, and came to Revelstoke, B.C. as his brother was there. He worked in lumber camps as he was used to that work in Sweden. There he met Oscar Pearson who wanted him to go with him to Elk Point to take a homestead - only $10.00 for 160 acres. There were so many bachelors out there. When they built a new log house they had a dance in it. The girls brought lunch and someone had a violin or accordion and they would dance till morning.

They broke land, fenced it, proved it up, and it was home sweet home. One time after he had been working out all summer for very little he got home to find that someone had gone in his one-room shack and had taken everything like blankets, dishes, cutlery, and pots and pans. 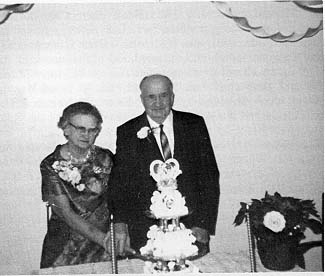 There were many Scandinavians at Stoney Lake. All traded in Elk Point. Alex was married December 5, 1920, to Florence Lundgren. His mother passed away when he was only three years old. Most of the bachelors got married. Not one tried to "keep up with the Joneses". They were all ready to help a new settler build a shack. People in olden days had time for their neighbors. It was nine miles from Elk Point to his homestead - no phones, no inside plumbing. When we got something new we really did appreciate it.

In the depression we sold eggs for as low as 3 centsa dozen. We took five dozen to town, got l4 cents and got three chocolate eggs for our three children so they could see what Easter meant. If you were lucky you got three or four dollars for a 200 pound hog. We sold turkeys for 35 cents each, cream sweet and a good test for l0 cents a pound

Now we have made Elk Point our home We find people here friendly. 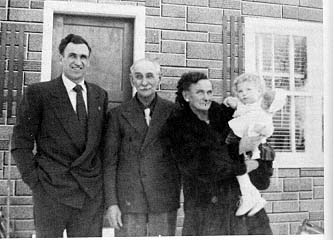