My father, Charles August Johnson, was born in Stockholm, Sweden, on Sept. 8, 1876. He immigrated to Iowa in the U.S.A., and was married there to Ella Julia Quandahl, who had graduated as a teacher at Cedar Falls, Iowa.

In 1914, Dad started a pool hall and ice cream parlour in Elk Point, approximately where Mrs. 0. Melnyk, Sr., now lives. In the ice cream parlour were eight chairs and two tables of heavy, durable wire construction, with seats and tops made of oak. My wife and I now have one of the tables, and four of the chairs in our home. The ice blocks came from the North Saskatchewan River, and were packed in sawdust in an ice house to keep them all summer. Dad first made his ice cream by rotating a metal container by hand. This container, of course, was placed inside a larger container which held the ice and salt, which naturally froze the ice cream. During the manual rotation while making the ice cream, he would have to take the top off periodically and stir, as there were no paddles inside the ice cream container. A dish of plain ice cream sold for ten cents, but the "Elk Point Special" was twenty five cents. This included sliced bananas, ice cream, and home-preserved strawberries.

In a few years, the ice cream parlour was converted into a general store. But when the townsite moved west in 1927 when the railway came, Dad built a new store where the present bank now is, and the old store became our home, as Dad had sold the homestead home to Mr. Hood. In 1939 Dad and Mother built a new house. The old one was bought by Lawrence Sumpton, and was moved and made into a hatchery on his property. 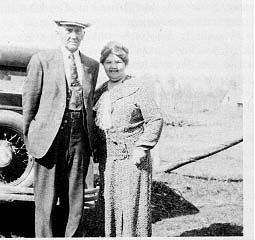 After a fire demolished Dad's new store, he opened an Insurance and Real Estate business He was also secretary treasurer for Elk Point School District from the early thirties until the St. Paul School Division was formed. I remember that he did not have the most popular job (by far), collecting school taxes during the depression, but he did exceptionally well. Accounts were always paid on time, and the school district was able to pay its teachers quite well, considering the times. I still have his one and only typewriter, on which he did all the correspondence. It is an Oliver, made in 1912, and was brought from the United States.

Some years before leaving Elk Point, Dad became a Notary Public. He also sold marriage licenses, then six dollars, to people who came from far and wide. 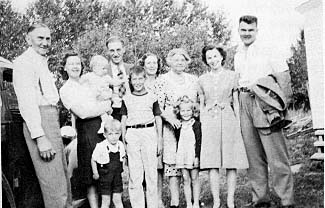 Mother taught piano lessons through the years, and like Dad, was active in community affairs. They first attended church services at Aarbo School, or in private homes, with Mother sometimes playing the organ. The church in those days orientated people and community, and everyone, Mother and Dad included, worked together to help the sick and unfortunate, as the needs presented themselves. After a church was built, Mother played the organ, and led the choir, and was a worthy member of the Ladies' Aid. She recalls many happy hours spent working at bazaars, quilting bees and church suppers, most often side-by-side with her dear friend and neighbor, Mrs. F.G. Miller.

In 1955, Mother and Dad moved to Edmonton. Dad passed on in November, 1960. Mother is in her 90th year at this writing, and is going strong, except that she is blind. She is now at Holyrood Nursing Home, very close to us.