John Ruzycki was born in the Western Ukraine (Austria), the village of Bialo in the district of Czorthiuv in 1875. He and his brother Dan immigrated to Canada in 1900, where John was employed with the Canadian Pacific Railroad Builders under the direction of J.D. McArthur. In the district called Strathcona he helped construct the High Level Bridge. Dan, with more education, moved to the United States and settled in Chicago.

In 1902 John moved to Innisfree and took a homestead in the district of Bruno, where he built a one-room sod house with dirt floor. In 1906 he married Dora Kamirisky, daughter of John and Josie Kaminsky. They travelled by oxen to Mundare, where the marriage took place. In 1907 their first child, Annie, was born, followed by Steve and Mike. In 1912 his wife died, leaving him with three small children. In 1913 he married Jessie Bycyk, in the Roman Catholic Church at Vermilion. Minnie and Pete were the first children of his second marriage. 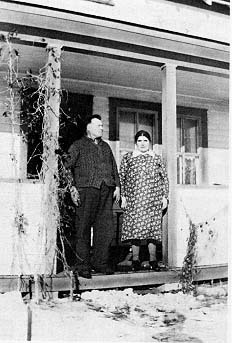 In 1918 he purchased S.E. 14-56-7-W4 in the King George district from John McBridle. This seemed to be more fertile land than at Innisfree. He moved his wife and five small children into a two-room log house, where Paul, Mary and Stanley were born.

In 1932 he purchased his first car, a Whippet, for $250, from a dealer in Myrnam. By this time the price for raw material was considerably an advantage in selling their grain and stock.

In 1937 he purchased a four-door Ford. A short while later his oldest daughter, Annie, lost her husband, leaving two small daughters fatherless. On February 21, 1937, his oldest son Steve married Nellie Zarowny, daughter of Mike and Annie Zarowny. They moved onto their new location which was situated one and a half miles south of Elk Point. In 1939 Annie married Stanley Yopyk. On October26, 1940, Minnie married Frank Moneta, son of Mary and William Moneta. Their new home was only a hop and skip from John and Jessie's place. On October 28, 1941, Mike married Olga Wynnyk, daughter of Mary and Phillip Wynnyk. They settled eight and a half miles south east of the home place.

In 1947 John retired and moved to the town of Elk Point with his wife and daughter Mary. Pete, Paul and Stanley had taken over the farms. In the fall of his retirement, John had an accident, broke his arm and lost sight in one eye. His arm mended quickly in six weeks; for exercise Dr. Ross made him pick up a half pail of water many times daily. But his health was failing considerably for he was in doctor's care at all times.

In October of 1949, John got really sick. Dr. Ross came to the house once a day to give him painkillers as he couldn't sleep. Then in seven weeks he passed away. His last spoken words were, "Oh, what nice church bells I hear. Just listen to them." He was seventy four years young when he was taken from us.

My daughter Mary moved in with me, with her husband and seven-week-old baby, Wayne. We arranged for W.J. Spruhan to be in charge of the funeral. However, Eugene, Martin transported the body to the funeral home. Mr. Spruhan had to cross over the Brosseau Bridge for the river was not safe to cross with vehicles. There was no snow then, just heavy frost at night. Also the government had started construction of the North Saskatchewan Bridge. One pier was up on the north end of the river at that time. The funeral was on December 4th in the Northern Valley Greek Catholic Church and interment in the church cemetery. The bridge was completed in 1950.

On August 12, 1950, my son Paul married Mary Kobylnyk, daughter of Annie and Steve Kobylnyk. They moved just half a mile south from my husband's farm. Later Pete moved into Elk Point where he purchased a school bus and gravel truck from the sale of their land to Paul.

Stanley was left on the home place, where he became the independent farmer, too. Later he moved to Calgary where he completed a certified hospital orderly course. Now he is employed in the new Elk Point hospital and lives with me in Elk Point. 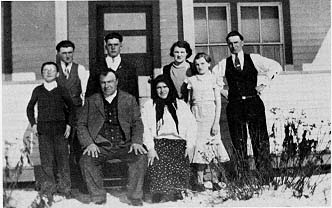