My first contribution to Reflections was not complete, in that I did not mention the location of our farm. My Dad bought the N.W.-1 /4 section 12,-57-8 in 1913, and we came to Canada in March of 1914, from Storm Lake, Iowa. My Dad, Nels Swanson, remained on the farm until the time of his death from double pneumonia, in April of 1928, at the age of fifty-six. 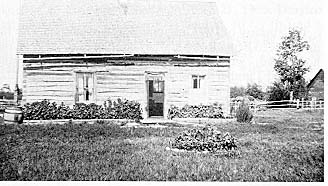 Johnson's home, built by Nels Swanson and Matt Ericson, in 1914. 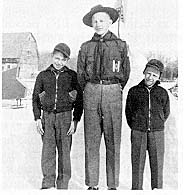 My mother, Clara Anderson, and my dad were married in Storm Lake, Iowa in 1902, and I was born in February of 1904. My mother outlived my dad by seventeen years. She passed away in 1945 at the age of eighty-one. 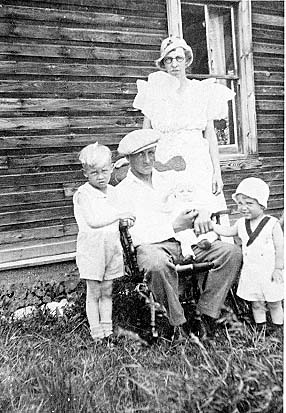 Our boys went to school in Orvilton, three miles away, until Roy had to take grade nine in Elk Point. Later on,in 1948, our two younger boys and I rented a small house from Art Landers, on the spot where John Ference Sr. lives and Eric and Sigvard went to school. Later we built our own house next to the house where Mr. and Mrs. Harry Day lived. The boys went to school until they completed their grade twelve. Then we sold our house to Matt Siler, and moved to Edmonton in 1955. Some people may remember me in that I used to do sewing in Elk Point. Roy left Elk Point in 1950 to apprentice in Cowley's Radio in Edmonton, Eric and Sigvard got office jobs. Arthur first worked as maintenance man in an apartment block, later as "cleaner and helper" in the Griesbach Barracks until his retirement in 1969. After much illness, we retired to Surrey, B. C. in 1969, but we had lived only five months there when Arthur passed away in January 1970. After that I came back to Edmonton.

Roy's first wife passed away of cancer in 1970. He has remarried in 1974 and lives in Calgary and is employed by Motorola Electronics. Roy has five sons. Eric lives in Vancouver and is employed with U.B.C. in Forestry and has three sons and one daughter. Sigvard lives in Sherwood Park, Alberta and is employed in heavy equipment as a registered industrial accountant, in the city of Edmonton. He has two daughters and one son.

I now live in Elmwood Lodge for Senior Citizens here in Edmonton which is home to me now, and have just passed my 74 year mark, but as do so many others, I love to relive the past, for it seems that memories are all we really have - some happy; some not so happy.