My father was born in the state of Ohio and my mother in the state of Missouri. Later they moved to the state of Illinois, where they were married. Roy, my older brother, and I were born in Illinois. When I was two, 1893, my parents moved to Iowa near the town of Creston. My father took up farming on several different farms till the spring of 1907, when he was persuaded by Mr. Court Smith to go to Alberta and get a homestead of 160 acres for $10.00. So, on the 30th day of March, 1907, we loaded two box cars with stock and goods and left for Alberta. I went with one car and four mules, and Roy was in the other car with four horses, etc. Mr. Smith loaded two cars at the same time, so the four cars of us were all together.

That was fine until we arrived in Minneapolis - St. Paul. My car was laid off for repair to the brakes. I was left alone there. The others went on. I caught up to them at Winnipeg but again they left ahead of me. Then the big storm came. I got as far as Togo and was there seven days, then on to Kamsack, where I spent another seven days. The others got as far as North Battleford, where they remained for fourteen days, all of us snow bound. The men cut wood along the tracks to keep the stoves in the cars going and the place warm. 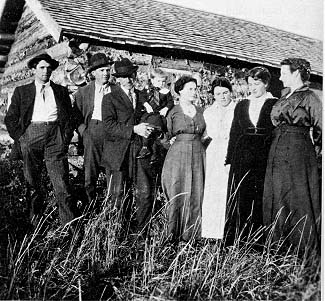 After the C.N.R. cleared the tracks of snow, we finally arrived at Vegreville, Alberta, where we unloaded. I was thirty-one days in a box car. I was sixteen years old when we left Iowa but was seventeen when we arrived in Vegreville. Then we had to haul our goods over just trails for eighty miles to where we took up homesteads, as we took land on the north side of the Saskatchewan River and the only ferry was north of Vegreville. Our homestead was N.W. 1/4-28-56-7-W4.

Mother stayed in Vegreville for a year. Father and I went to the homestead to build a house and barn, also do some breaking of land. So, after putting in a crop on rented land at Vegreville, we did get a house and barn built but not finished. We built out of logs which we got out in the summer. We had to fight mosquitoes and sand flies by the billions. The winter of 1907 Roy and I, along with a friend, Ray Howard, stayed on the homestead and got out saw logs to be sawed into lumber the next winter.

The summer of 1908 a ferry was put in the Saskatchewan River at Hopkins, which was south of our homestead about two miles. A store was built and a post office was established there. A half-breed by the name of John Ross took the job of carrying the mail from Vermilion by Landonville, Hopkins over the mail route, which later was extended to Elk Point and Mooswa. Charley Hood had the post office at Elk Point.

By this time a lot of people had come in and settled. As the nearest doctor was Vermilion, my mother brought a lot of babies into the world, and looked after a lot of the sick.

Mr. G.J. Algot, who had the post office at Angle Lake, tells this story: "Once while hauling the mail, Mr. Caskey got as far as Angle Lake, when he had such a bad pain in his side that he had to stop. Dr. Smith was called from Vermilion. The diagnosis was a near-burst appendix, which meant an immediate operation. Dr. Smith told him he would die if he didn't operate, and he might die if he did. There wasn't much choice, so Mr. Caskey said, "Operate". 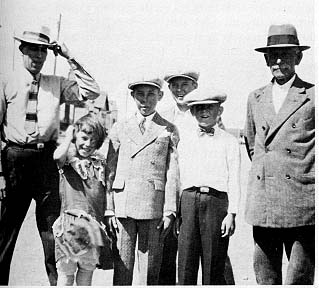 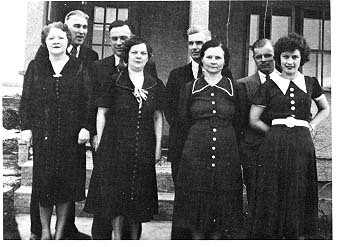 "Ma" Caskey checking on her brood of sons and their wives. LEFT TO RIGHT: Roy, Ed, Oran, and Dewey.

Our large kitchen table was cleared, covered with papers, lamps were lit, the patient laid out, and all was ready. I held one lamp and a teacher who boarded with us held another lamp. I was steady, but the teacher became queasy and his lamp started to tilt. I said a few choice words, which straightened up the teacher somewhat, also the lamp. When all was over, the teacher went out and pumped water down the hill in a steady stream for over an hour the only way he knew to work off his tension.

The operation was successful, a nurse was hired, and Dr. Smith visited the patient regularly. In ways such as this, rough and ready medical aid was administered." Our home became a stopping place for many new settlers. I bought a small threshing machine and wood saw, so in the fall threshed the small crops and cut up wood for heat in the homes.

In 1916 I built a hotel in Elk Point but found, with a growing family, it was too much work for my wife. Mother bought the hotel and had it until 1938 or 39, when she sold it to Cromwells. She built a home in Elk Point and retired there. She was always affectionately know as "Ma" and her cooking was known all over the country -- especially her apple pies. Nobody was ever turned away hungry. Father died in 1938, Mother in 1951.

I got married in April, 1913. We raised three boys and one girl. They are all married and well I am the only one left of my family I will be 86 next April and am quite well.