An interesting geological area seldom visited any more is Eagle Cliff. This unique formation of high cliffs, crevices and sliding shale is located along the north bank of our nearby North Saskatchewan River, about 5 miles south east of Elk Point. Here you can view the wandering river from the height of about 300 feet, or photograph the many interesting scenes visible from this high location.

At one time, Eagle Cliff was the site of many attractions. When I first visited it well over 60 years ago the upper part of it was the home of thousands of garter snakes. During each fall these harmless reptiles returned to this area and spent the winter there, balled up in huge masses in the many crevices of the upper parts of the cliffs. In the spring when it warmed up, they remained in their snake pits sunning themselves for many days before starting their annual spring migration. During this period many people visited these snake pits, others who feared snakes made a point of not going near the place. 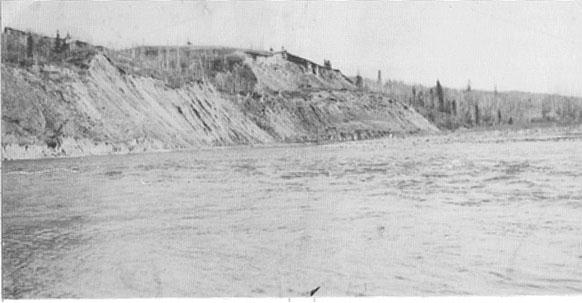 The lower portion of Eagle Cliff had two or three very steep cliffs which had a heavy coating of shale on them which was constantly shifting toward the river shore. This area was a geologist's paradise. Here you could find fossils of every description, all considered to be many thousands of years old. There were many varieties of clam shell fossils as well as other fossils which had a motherâof-pearl covering and were scientifically known as ammonites. Other shells were imbedded in large rocks which could only be chipped out with a chisel. There were other remains of prehistoric life as well, on the cliffs and the river shore.

During the middle 1930s many of us spent countless hours climbing these cliffs searching for fossils whenever they became exposed after the shale shifted toward the bottom of the cliffs.

At one time, Eagle Cliff was easily accessible, however it is now quite heavily wooded and in order to get there you have to walk about a mile. It can be reached from the Fort George â Buckingham House Interpretive Centre site which is located approximately a mile to the east. Another way it can be reached is by floating down the river. This method eliminates the strenuous descent of the cliffs.

During spring runoff, a roaring creek flows from the extreme top portion to the river below. The surrounding areas is the home of many kinds of animals; such as deer, porcupines, beaver, coyotes and rabbits. It is also the nesting place of many species of birds. At one time, eagles nested in the cliffs and presumably that is how Eagle Cliff got its name.

Eagle Cliff is an extremely rough area and to explore it, one must use caution to avoid an unforseen accident. I have often thought o revisiting this place, however I now realize my legs could never stand the punishment, so I will just have to rely on my past memories of this interesting formation and leave it at that. The surrounding river scenes of Eagle Cliff are magnificent during the summer and are ideal for photography. A large wooded island lies in the middle of the river and adds to the beauty of the surrounding area. Eagle Cliff is one of our beauty spots, and it is unfortunate so many people are unable to visit it because of its inaccessibility.

Eagle Cliff is no longer the winter home of the garter snake. Someone, for some unknown reason, dynamited the snake pits killing thousands of snakes, many years ago, and they no longer return to this location. Apparently they now gather along the river banks to the east of our salt plant.

Years ago, Eagle Cliff was a popular spot to visit however, today, very few people ever go near the place in fact, many people who have lived in this area most of their lives are unaware that such a place even exists.