William Henry Rockwell was born in Saginaw, Michigan, Sept. 11, 1869. He married Ethel McQuoid in 1902 in Minneapolis, Minnesota. Ethel was born in 1880 in Toronto, Ontario. In 1922 Bill and Ethel came to the Elk Point district and bought Lloyd Lambright's homestead -- N.W. 12-57-7-W4. In 1927 they bought another quarter. Bill and son Bud farmed together.

Gladys, their first-born, was born in Mission, Minnesota, Jan. 9, 1903. She married Tom Armstrong in 1922 in Edmonton. They moved to Bonners Ferry, Idaho. They had two daughters and a son, who was lost in World War II. After Tom passed away, Gladys married Harry Dunn. She has been widowed since 1958, living in Bonners Ferry. They had one daughter, Betty Lou.

Pearl was born in 1905. She married Bill Crossin in Bonners Ferry in 1926. They returned to Elk Point in 1927 to farm near Orin Caskey. They dissolved their marriage in 1931. Pearl married William Terry who operated a shoe shop on 101st Street and Jasper Avenue in Edmonton. They lived in the Norwood District for several years. Later they moved to Alaska, living in Anchorage. Juneau and Ketchikan, during the war. They were living in Portland at the time of Bill's death. Pearl had two sons -- Jim, by her first marriage and Rockwell William (Rocky), by her second. She passed away April 22, 1976. 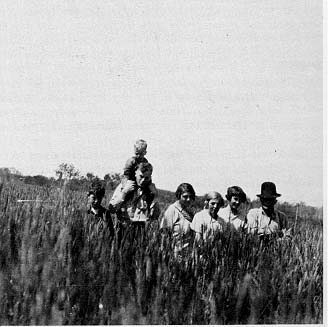 William Rockwell family in a field of grain.

Mina was born in 1906 in Minnesota. She went to college in Edmonton, where she married Pete Campbell. They had four children. Pete was in the armed services during the second World War. Their marriage was broken after the war. Pete went to cook in the Ponoka Institute and Mina moved to Haney, B.C. Mina passed away in June of 1967.

Bud was born in 1909. He farmed with his father until his marriage to Nellie Zarowny in 1935, when he moved to a farm of his own. They had two daughters at the time they left Elk Point in the late forties, to continue farming at Jarvie. Son Jim was born here. Bud and Nellie retired to a new home in Jarvie in 1976.

Joe was born in June, 1914, in Bonners Ferry. He married Rose Beauregard in the fall of 1933. They raised three girls and one boy. Joe and Rose moved to Haney, B.C., in 1949, where Joe worked in Hammond Cedar Mills for several years before moving to Canoe, B.C. 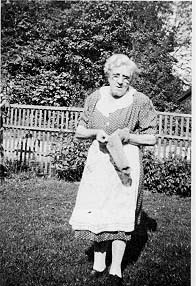