Ernest Heinemann was born in 1881 in northern Germany. When he was fifteen he and his friend and neighbor, Mr. Joe Keller, immigrated to London, England, where they took up the trade of cabinet making. Here they worked until 1904 when they decided to come to Canada. In London, Ontario they worked in a cabinet factory. Then hearing of free land in the west they decided to go homesteading so in 1909 they came to Vermilion and filed on adjoining homesteads thirty miles north of Vermilion. The Heinemann land was SW 1/4 32-5 5-6-W4th.

They built a log house on Heinemann's land and for three winters returned to Ontario to work as cabinet makers, spending the summers on the homestead. Ernest told of the mosquitoes being so bad in summer that he had to carry a smudge with him in a pail. The flies bothered the oxen and they would run away.

While in England he had met Ellen Lindsell, born in 1888, who worked at the house where he boarded. He wrote asking her to come to Canada. She happened to arrive in Vermilion a week earlier than expected and since there was no way to let Mr. Heinemann know she was there, she had to stay with the Anglican minister and his wife until M Heinemann arrived. So she would not have the long tedious~ drive behind oxen, he hired a team of horses and buggy tobring her home. They were married in July 1911 - It must have been a shock for a city girl to be transplanted to a wilderness - heavy bush, coyotes howling, beaver, moose, ar deer for neighbors. She adjusted well, learning to milk cows, plant garden, raise chickens, and even stook grain. All this was new to her.

In 1912 their first son died at the age of one month. Mr. Heinemann was in Vermilion with a team of oxen at the time of the death. Neighbors met him on horseback, brought back the oxen and let him come home the faster way on horse-back.

In 1913 there were two events - Karl was born May 2 and the Northern Valley post office was established at the Heinemann's in May. Jesse Caskey and later Mr. Monkman delivered mail from Vermilion twice a week. Maildays were Tuesdays and Saturdays, when settlers in about a six mile radius came for their mail. Before this, the postmaster was Mr. Doxey who lived on the SW-1/4-30-55-6-W4th. Sometimes during the winter the mail was held up due to storms, cold weather, and drifted roads. People were anxious for mail and news so they were all there waiting for the mailman at for Mrs. Heinemann to sort the mail. At first the mail was not heavy but as the people got more money there we many more parcels from Eatons and Simpsons - maybe ten to twelve bags of mail. Mr. Heinemann wrote letters for many Ukrainian people who had not yet learned to write English. He often made out their orders to Eatons for clothing, etc. They often ordered twenty-five pound boxes of dry fruit from Eatons. Heinemanns kept the post office until it was moved to the Northern Valley store in 1945 -

One time a man tried to rob the post office. Heinemann's had a vicious dog so the man threw poisoned meat to her. Karl happened by on horseback. The man took fright and drove off. The mail was saved but next morning the dog was dead. 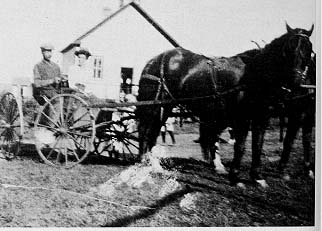 Mr and Mrs Ernest Heinemann in front of King George School, about 1920.

Mr. Heinemann put in the foundation for the King George school in 1912. The children walked two and one half miles every day to attend. This was only in summer months or until Christmas as it was too cold to have school in winter. Once Albert froze his legs walking to school. The Christmas concert was the big thing in those days and people travelled to see all the concerts in the country. The children remember their first teacher was Miss Bailey, later Mrs.Wm. Dunkin. Mr. Heinemann was secretary-treasurer for King George school until the early thirties. Mr. C.V. Larson used to audit the books. School taxes had to be cash but municipal taxes could be partly worked out by doing road work -building and later maintaining. Horses and slips were used at first, later horses and grader.

Karl remembers his first trip to Vermilion in 1920. His father was taking a load of pigs to market. The weather was so hot they had to travel at night leaving home at 11 p.m. Karl and Albert slept most of the way. They saw their first movie with Charlie Chaplin. Karl and Albert also had their first meal in a Chinese Cafe where Karl, in the crowded washroom, tumbled down the stairs to the basement. He had always been afraid of Chinese and this didn't help.

In about 1920 the government extended the telephone line to Northern Valley post office. This gave the area communication with the outside world. It was mostly used for calling a doctor. In 1923 a call came for Dr. Miller to go to a home in Northern Valley. Since it was late at night and very dark, a lantern was hung on the gatepost to guide him to the right house.

In November of 1933 Karl had to take his father to the hospital. The river was just freezing at the time and the ice was unsafe so they went one half mile west of the present bridge where the river always freezes first. Karl unhitched the horses, led one across at a time, then went back for the buggy which he pulled across while his father walked.

Karl remembers the last cattle drive. It was in 1926 when several settlers banded together and drove 200 cattle to market in Vermilion. The men, on horseback, herded the cattle; however, one hardy soul walked all the way. They made arrangements to stop overnight at Homer Campbell's since he had corrals to hold the animals. The railroad came to Elk Point the next year so marketing was done there from then on.

In the early 30's wheat was 17 cents a bushel and a load usually was fifty-five bushels. It took two loads to pay taxes on a half section of land. At this time a pig sold for $2.00. Eggs were 3 cents a dozen. Often they were fed to the calves rather then haul them to town.

In the late 30's times became better - wheat was 60 cents a bushel. The boys took over most of the farming. They bought their first vehicle - a half-ton V8 truck in 1937 from CJ. Markstad for $725.00. The boys planted about 500 spruce trees around theIr home hauling them from ten miles away.

Mr. Heinemann died in the spring of 1938. Fred still lives on the homeplace along with his mother. Karl married Nancy Zarowny and now lives in Elk Point. Albert married Mary Stuparyk and lives in Kimberley, British Columbia. Ethel married Steve Wasylishen. She is now a widow and lives in Vermilion. Stanley married Olga Wasylishen, is now a widower and lives in northern Ontario. Ernest married Tillie Scribney and is now deceased. Agnes married Miller Palmer and lived in Edmonton. 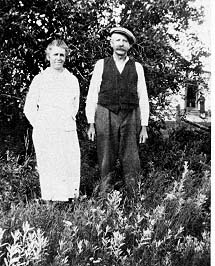