In 1910 John Wesley Babcock moved his family via immigrant box car from Minnesota. He came to the Elk Point district and homesteaded the N.W. 7-57-6-W4th. His reason for leaving Minnesota was the high value of land, hence exorbitant rent. The interest that prompted the move was spurred by the preview trip of Mr. O.J. Fish.

John's family consisted of wife Mary; married son James and his two daughters; married daughter Stella Nelson and son; son Leo; daughters Alice and baby Lois. They left the train at Vermilion where the oxen, Buck and Bright, were bought and a sleigh loaded to join the four-sleigh convoy to Elk Point. With them were the George Martindales (Edna was John's sister) and their two daughters -Clara, who married Ira Willis; and Nell, who later married Frank Lambright.

Leo walked the twenty-two miles to St. Paul through knee deep snow at 20 degrees below zero F. to file on his homestead. James took the quarter east of John's but then started a store in Elk Point to which Leo hauled freight from Vermilion, walking the many weary miles more often at below zero temperatures, at fifty cents per cwt. - or one cent a mile!

Behind the same oxen he started breaking the land. The oxen were able to work, living on the grass they picked -where many horses, imported, sickened and died of swamp fever. But the oxen were slow! - so slow and exasperating that Leo used such strong language that his good Catholic mother objected! One day as she had fetched out his lunch he suggested that she "take them a round" while he went to the creek for a drink. It must have been a long drink, for when he returned, Mary agreed that possibly there was some excuse for his strong talk. Mary acted as free midwife for the community.

Leo and Alice would walk five miles to a dance, dance all night, and walk home again. Beyond neighborhood visiting there was little entertainment. The highlight of the year was the annual picnic in town, at first held July 4 as it was largely an American settlement, then later alternating to July 1. The ball game and tug-of-war were the real drawing cards, and in the latter, the end that had Arlie Springsteel as anchor man would win! 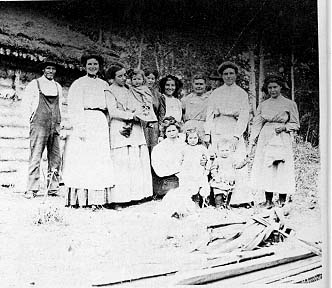 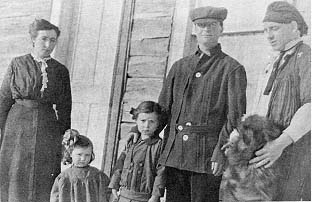 Laura Babcock with daughters Viola, Vera, and husband Jim on the steps of Jim Babcock's store.

Man on right is a visiting baseball player