Hugh McLean arrived in the area when he was quite young. He married Cora Plante, daughter of the first hotel owner in Elk Point. Their issue were Victor, born November 5, 1916; Angus, born November 28,1917; and William, born June 1, 1923.

Hugh served as sheriff of the general area from 1926 through 1939. During hard times many articles were seized from the farmers around Derwent, Frog Lake, Bonnyville, Lake Eliza, as well as the Elk Point area. These goods were auctioned in Elk Point. He had many stories to tell of the experiences he had while seizing grain and equipment. At one time he was drenched with a pail of buttermilk. He also came home with cuts and bruises suffered at the hands of enraged men and women trying to prevent him from doing his duty.

Hugh McLean lived his life with great gusto. He worked hard and played hard. He will be long remembered for his ability to step dance and jig. 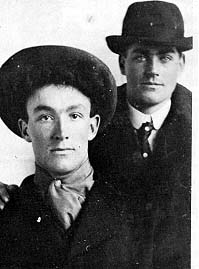 Hugh McLean and friend on the right, early 1900's.